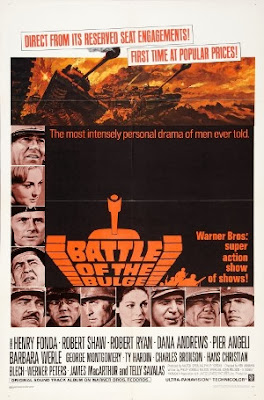 I had seen a film in 1965, titled as “Battle of the Bulge.” It was a WW II movie with Henry Fonda and Charles Bronson acting in it. After all these years, what I still remember from this film, is a group song, sung in the film by the young German tank crews. The song “ Panzer-lied,” is one of the best known Wehrmacht songs. It was composed in June 1933 by Oberleutnant Kurt Wiehle. Wiehle adapted a German sailor's song, writing lyrics more appropriate to the Panzerwaffe. Wikipedia says that at the time, Germany was clandestinely developing an armored force in defiance of the Treaty of Versailles. The song could be considered as a reflection of the German re-armament, launched in the same time frame as the song was written.

English translation of the first stanza, goes something like this.

If it storms or snows, or the sun smiles on us,
The day burning hot, or the icy cold of night.
Dusty are our faces, but happy is our sense, yes, our sense.
Then roar our tanks into the storm's wind.

The song became famous in the English-speaking world due to its usage in the 1965 film Battle of the Bulge.

You can also copy and paste the link http://youtu.be/i-n8YW1rrxI in your You Tube App. If that also does not work, search You tube, Panzer lied with subtitles - the German tank song