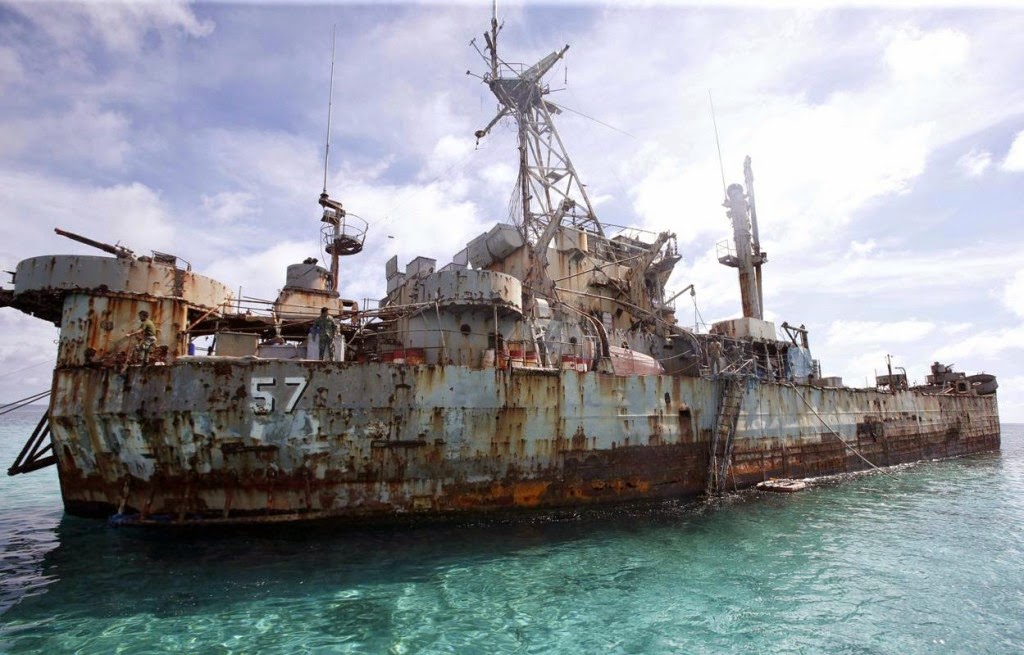 Sometime back, I wrote a post about a ship intentionally wrecked in South China Sea- near the Second Thomas Shoal located at the southwestern end of the Philippine archipelago- about 200 Km west of Palawan island- to be precise. These Shoals are really two scattered groups of few rocks- that project out from the deep waters of the South China Sea. During low tides, much of the reef is above water. It even encloses a small lagoon. The rocks, known as “First Thomas Shoal” and “Second Thomas Shoal (also known as Ayungin),” are part of “Spratly islands” group and have gained in recent years some importance from a strategic point of view. Out of these two reefs, “Second Thomas Shoal is considered as a strategic gateway to Reed Bank, believed to be rich in oil and natural gas. Philippines claims that Reed bank tabletop, where all the oil and gas fields are supposed to be located, is within the country’s 200-nautical mile exclusive economic zone.

There have been claims and counterclaims of littoral countries of the region, on these reefs, which are a part of Spratly islands. In 1999, in a sudden action, Malaysia occupied Erica Reef and Investigator Shoal. Responding to this, Philippines purposefully ran aground two ships, BRP Sierra Madre and BRP Benquet, on Ayungin (Second Thomas) Reef and Panatag (Scarborough) Shoal during the same year. China, claiming sovereignty over Spratly Islands, requested the Philippines to remove the grounded ships. The Philippines immediately replied that it will do so whenever it can remove the ships. However, the one on Scarborough Shoal, was the only ship that was removed. On the contrary , considering the importance of the Shoal as a gateway to reed bank, Philippines actually assigned soldiers to take shelter on the grounded ship at Ayungin Reef and they continue to do so even today. 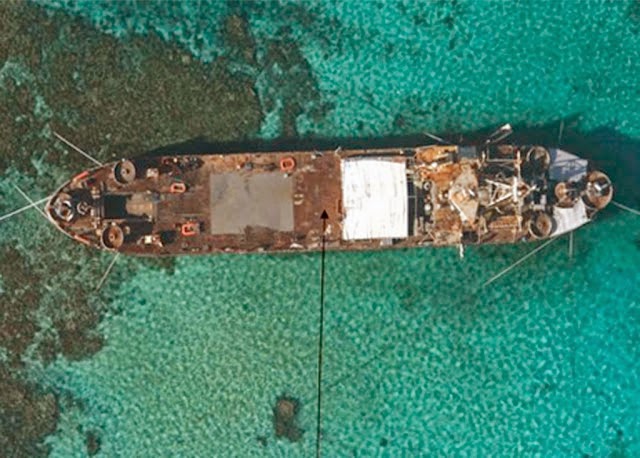 BRP Sierra Madre is a huge, rusting World War Two, cargo vessel. Ever since Philippine navy intentionally ran it aground in 1999 to mark its claim to the reef, it is serving as an outpost for Filipino soldiers. Around eight Filipino soldiers live here for three months at a time, just to prove the point that it lies within Philippine’s 200-nautical mile exclusive economic zone (EEZ) directly contesting the Chinese claims that the shoal-which it calls as Ren’ai reef- is part of its territory. China has been claiming 90 percent of the South China Sea as its own territory. Living conditions for Philippine soldiers living on BRP Sierra Madre are very harsh. The shoal itself is totally inhospitable and the soldiers are forced to confine themselves to the junk. Supplies of almost all necessities of life -even food and water- has to come from Philippines itself. To show to the Chinese, that the junk ship is a real Philippine military outpost, every day at dusk, the eight soldiers living on the ship, put on military fatigues and carry out a daily ceremony of lowering the Philippine flag. 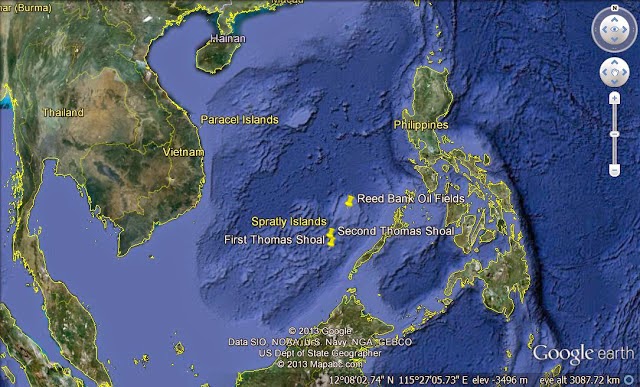 To back up its claims on the region, Chinese coastguard ships- from its recently unified coastguard command- are now stationed around the shoal and have become a permanent fixture there. Luckily, these coastguard ships do not have the weaponry of military vessels. This ensures that during a confrontation things do not get out of control. The coastguard ships show a potent show of sovereignty though.

Around three weeks ago or on March 9th, 2014, Chinese coast guard ships blocked two Philippine supply vessels from reaching BRP Sierra Madre. Philippines immediately launched a strong protest. United States was quick to call this act as provocative. The Philippines had to resort to air dropping food and water instead. To invite the attention of the world media to this latest international flashpoint, Philippines invited this week some reporters on board of a supply ship scheduled to visit BRP Sierra Madre to participate in the action, which were no way short of a Tom and Jerry action cartoon. 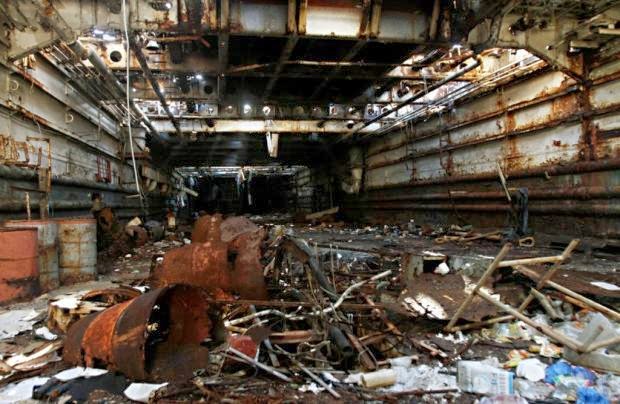 “Things were going smoothly for the Philippine ship until it was spotted by a Chinese coastguard ship about an hour away from the Second Thomas Shoal. The Chinese boat picked up speed to come near the left of the white Philippine ship, honking its horn at least three times. The Chinese ship slowed down after a few minutes, but then a bigger coastguard vessel emerged, moving fast to cut the path of the Philippine boat. The Chinese sent a radio message to the Filipinos, saying they were entering Chinese territory. “We order you to stop immediately, stop all illegal activities and leave,” said the radio message, delivered in English. Philippino ship replied that its mission was to deliver provisions to Philippine troops stationed in the area. Philippine troops wearing civilian clothes and journalists then flashed “V” for the peace sign at the Chinese. Later Instead of stopping or reversing, the Philippine vessel picked up speed and eventually maneuvered away from the Chinese, entering waters that were too shallow for the bigger coastguard ships. Filipino troops on the civilian vessel clapped as they came within a few meters of the marooned transport ship, the BRP Sierra Madre. Supplies of food and water were then hauled up to troops on board.”

To an onlooker, things might have looked like a Cat and Mouse game. But it was a serious business because as many as 3 planes-a US navy plane, a Philippine military aircraft and a Chinese plane — flew above the ships at different intervals, indicating the seriousness of what was happening at the Shoal. Captain of the Philippine ships, perhaps was aware of this seriousness, when he said that if they hadn’t changed direction or course, they would have collided with Chinese ships, creating a major international incident.

After much delay, Philippines appear to have finally decided to file a case against China next week at an arbitration tribunal in The Hague, subjecting Beijing to international legal scrutiny over the waters for the first time. Philippines would be seeking a seeking a ruling to confirm its right to exploit the waters in its EEZ as allowed under the U.N. Convention on the Law of the Sea (UNCLOS). China remains adamant and has refused to participate in this case. It is very doubtful whether Chinese would take actual military action against Philippines in this case, as their case according to International law is very weak. With such intransigent attitude on China's part, the dispute is unlikely to get settled in near future and these cat and mouse games are likely to continue.

BBC reports on 2nd April 2014 that the Philippines has submitted evidence to a UN tribunal hearing its case against China's territorial claims in the South China Sea.