“The Great departure”: sculptured over centuries, across the sub-continent 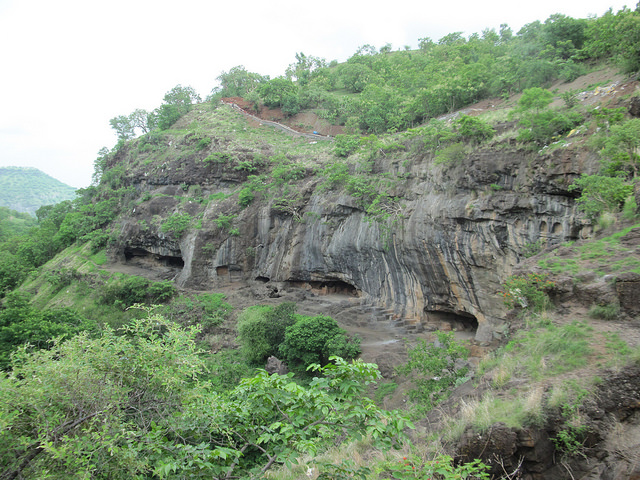 Can you ever imagine an event or scene being sculptured in stone, repeatedly over a long period of several centuries and that too at places spread far apart across the entire Indian sub-continent; right from its northwest corner to the Deccan plateau in the southeast? Believe me, there are several such scenes depicting incidents from the life of Buddha, that have been sculptured in stone  over centuries from our medieval past.

There is one episode from Buddha’s life that has remained a favourite of many an artist over centuries. This is known as Great Renunciation or Great departure and depicts the scene, where Prince Siddhartha Gautama having decided to give up his life as a prince, departs for enlightenment in the dead of the night, quietly and without informing any one from his palace in the capital, “Kapilavastu.”  In Buddhist literature, this event is often known as “Mahabhinishkramana (महाभिनिष्क्रमण).”

One of most ancient places, where this scene was found depicted on a stone tablet, was in the Rock cut Buddhist temples in the “Pitalkhora” valley, located in north Maharashtra near Aurangabad city. It is believed, that this work is probably dated around 200 BCE.
Let us have a close look at the tablet. 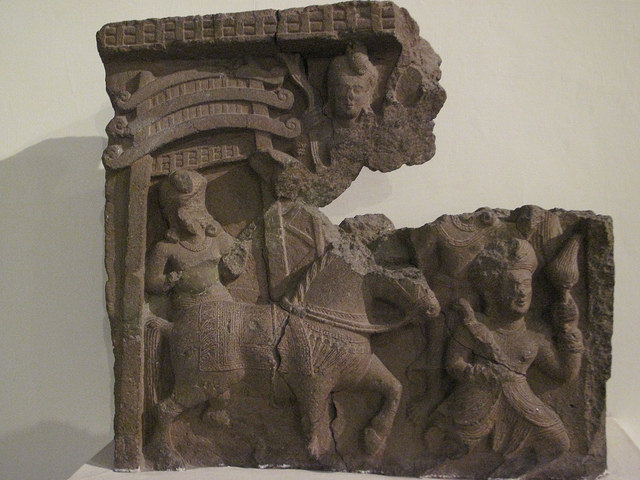 The city gate is depicted here as a triple tiered arch, the type which can still be seen at Sanchi Stupa. Just under the arch,  is a band, depicting vertical columns interspaced with horizontal circular members. This design can be seen in all Buddhist structures of this time and can be called as Sanchi railing Pattern because at Sanchi, the entire Stupa is enclosed in a railingl constructed with this kind of pattern.

The prince is leaving the city, riding a horse. Look at the elaborate designs and patterns on the horse’s harness, horse ornaments and the braided horse mane. All this shows that it is the royal horse. A servant is holding a parasol above the head of the prince, indicating his royalty.  Another attendant with a sword leads the way, holding a torch in the hand indicating that it is the night time, when the prince is leaving. A second attendant (partially destroyed) is also seen behind the torch bearer.

But where is the prince?  The absence of any figure representing the prince, itself gives us a clue about the time period, when this tablet was sculptured. During Hinayana phase of the Buddhism (prior to late first century CE), no human figures were allowed to be shown to represent the Buddha. This tablet, accordingly, shows no one riding the horse. Finally, the figure in upper right corner, holding a sword, represents whom?  He could be  probably the demon Mara, who is opposed to this departure of Siddhartha Gautama.

Look at the details like, the way hair are tied up by the attendants. They have a bun of hair right in front, above the forehead and a headgear, which consists of a long  band of cloth, is wrapped around the head. Both the attendants wear necklaces as well as large earrings, wear dhotis on their loins. The parasol holder is naked from up waist, whereas the path shower is wearing a jacket, perhaps indicating his higher status.

The stone in which this tablet is carved looks reddish and could be sand stone, The Pitalkhora caves have been excavated at a spot, where poor quality of basalt stone exists, indicating that this tablet or the stone for it, was brought from somewhere else.

We now move on to the eastern Deccan region, to the town of Amaravathi in present day state of Andhra Pradesh. A magnificent Stupa with a giant solid dome of one hundred and forty-eight feet diameter once stood here. How did this great Stupa look like? Just like the Taj Mahal, it could be described as poetry in marble (though of much inferior grade). Standing tall, the ninety feet high, marble-encased cupola at centre was surmounted by big stone umbrellas, the series of tall slender marble columns on the platforms marking four cardinal points, the four festooned gateways flanked by lion-topped columns and the fourteen feet high, sculptured railing round the stupa, all of which, together, must have been a sight of glory! The Stupa perhaps was the biggest symbol of the grandeur and wealth of the Satavahana Empire. The sculpturing around the central cupola and the fourteen feet high railing were done in four periods that can be roughly put in a time span as Period I - 200 to 100 BC; Period II - 100 AD; Period III - 150 AD and Period IV - 200 to 250 AD. This means that it covers both the Hinayana and Mahayana periods and that is why, images of Buddha appear only at certain places, probably sculptured during Mahayana phase.

On one of the marble slabs, the scene of the Great Departure was found sculptured. This tablet is believed to have been carved sometime in early first century, almost two hundred years later and also hundreds of Kms away from Pitalkhore caves. Yet the basic details of the scene remain all the same. Let us have a look. 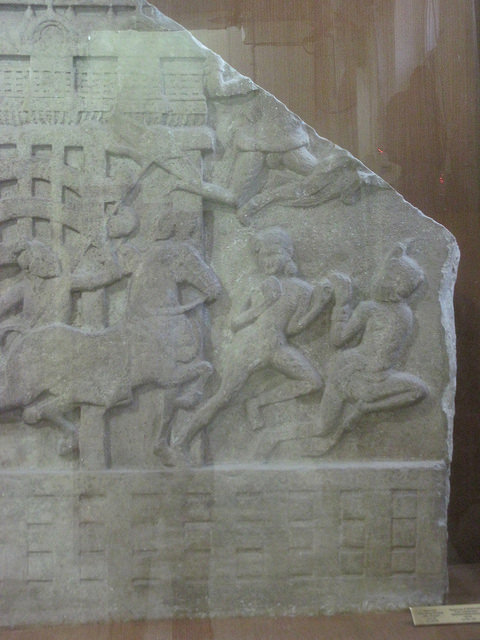 The city gate, represented by an arch, is shown in a similar fashion, though the design of the arch differs radically. It consists here of a grill pattern with square holes, as often found  in Buddhist Rock cut temples of Deccan. There is a band with Sanchi railing  pattern above the city gate. Above this, two Hinayana period Budhist arches (holy Buddhist symbols from those times) can be seen. The Parasol holder of Pitalkhora tablet can be seen here also at the same place and two more attendants are shown in front of the horse. The attendants wear similar head gear, dhotis and have a waist band around their waists. They wear earrings and bracelets ontheir wrists. No torch is shown being carried by any of the attendants. The attendants however, are depicted with dainty and supple bodies and are shown in poses, which suggests dancing of some sorts. This is odd because the event or episode being described here is of very serious nature as the prince of the state is leaving.
The  Horse carries the harness with much less elaborate designs carved on it. No human figure representation of Buddha can be still seen here too, indicating that the Hinayana school of Buddhism was still ruling at the time when this tablet was carved. Demon Mara is probably shown in the sky, though his head has been destroyed. He is shown wearing a dhoti and a loose frock like shirt. The whole scene has been shown on top of a pedestal carved with Sanchi  railing patterns.

Let us now move further ahead in time frame by another hundred or hundred and fifty years, to the second century CE. By this period, the north and northwest India was under rule of Kushan tribes originally from central Asia with King Kanishka in power. The Buddhist religion was now split in two schools, Hinayana the older one and Mahayana, the new school. In most of the northern India, Mahayana school had taken over. This school allowed human figure representation of Buddha. King Kanishka being a follower of this school, it was the golden period for Mahayana Buddhism in India. In the north western Gandhara region (in Peshawar and around), Buddhist religious sites had become commonplace.  Buddhist arts, associated with a deep Graeco-Roman influence, had bloomed and Buddhist monasteries and stupas were commonly decorated with many Gandharan sculptures.

In the year 1896, Alexander caddy discovered a base of a stupa at Loriyan Tangai in Shakot pass region of Peshawar district of present day North-west Pakistan. The ruins are situated between Kaldara and Sargaro banda. He also discovered here at this site, number of small friezes and tablets with scenes from the life of Buddha. One of the tablets (sculptured from Schist rock) is of special interest to us as it depicts exactly the same scene of the Great departure.

Let us have a look 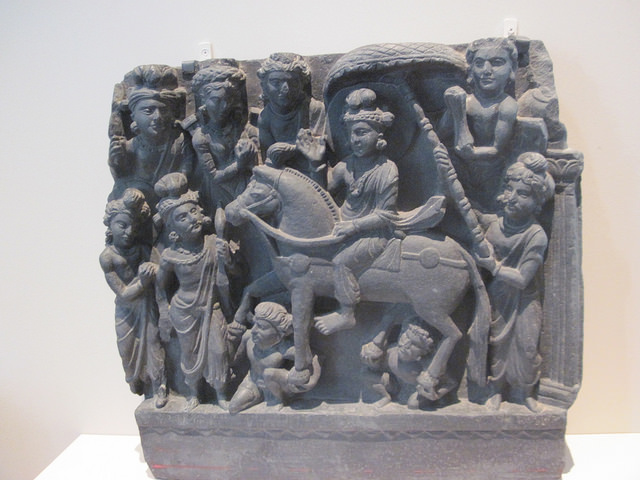 This sculpture radically differs from the previous two that I have described above. Gone is the Hinayana symbolism of Sanchi railing designs and holy arches. Gautama’s palace is perhaps represented here just by a decorative pillar. There is no city gate in the sculpture at all. The entire scene bears  typical Greek influence.

The most important change here is that the prince is shown in human form and is seen blessing the people around. The parasol to indicate his royal status is still there but the attendant holding it  is carved with far superior fineness and  details. He has grown a moustache and is shown wearing a full length dhoti and a long scarf across his shoulder. He wears a neckless, earrings and a bracelet on his wrists. The hair are no longer tied in a bun near forehead but are tied higher up, rather on top of the head with some hair in front (near the forehead) styled in Greek fashion. Two other attendants, similarly dressed, look at the prince but neither of them carries a torch. The demon Mara is shown in top left with a sword in his hand but now is accompanied by his two daughters, who are shown almost like Greek ladies of the past, with their hair styles and dresses.

The horse/s harness is with much less elaborate design on it. The horse has braided mane and wears a crest. It’s hooves are held by two “Yaksha” figures with Greek hairstyles, so that the horse hooves would not make noises and wake up no one. Another figure is shown in right hand top corner, not found in earlier sculptures.

Perhaps, what is most significant here is the fineness and greater attention to details, such as details on shaft of parasol, shown here. The expressions on the faces of the human figures, including  that of the prince,  are quite amazing. In particular, look at the admiring look on the face of the attendant on left or on face of one of the Mara’s daughters.

The comparison of these three sculptures, very well brings up the tremendous improvement Gandharan Art brought to sculpturing in India and how the same theme was treated by generations of artists coming from four centuries and from different regions of the sub-continent.

Recently I came across yet another sculpture in Museum at Mumbai, depicting this great event in Buddha's life. It is not known from where the panel was excavated. The museum legend says that it is from west Pakistan, that's all! 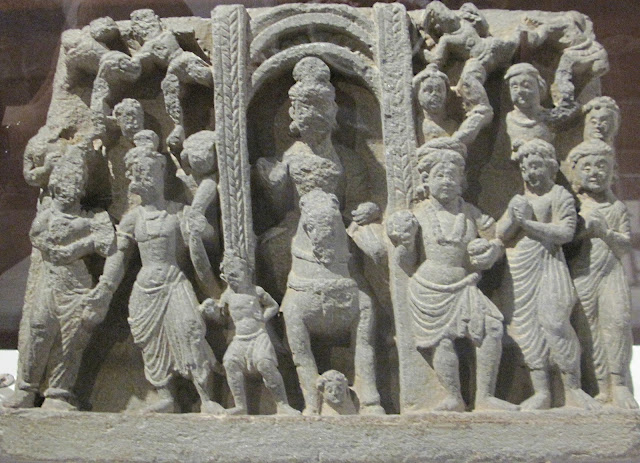 The bas relief panel has been done, without any doubt, in Gandhar style and bears great similarity of detail with the work described above. All the characters are there. Siddhartha Gautama riding the horse, gate, unhappy citizens, evil Mara and his daughters and even the Yaksha holding the horses' hooves. The panel has been much disfigured to really appreciate it's beauty. But some faces of people have been saved.

The most important difference between this panel and all others described above is the view of the horse and naturally of Siddhartha Gautama riding him. The horse and Siddharth Gautama face the onlooker. That is very interesting and makes this panel most unique.