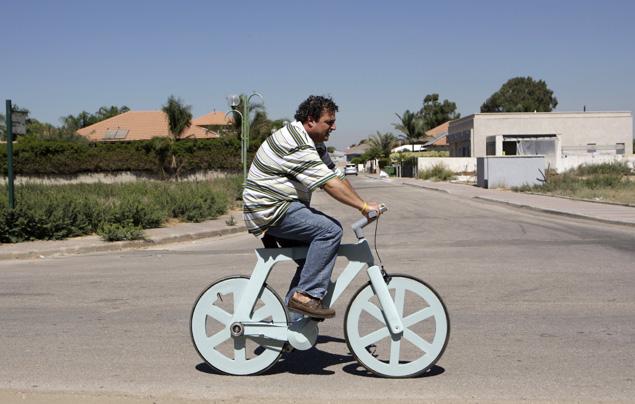 A bicycle, ever since its discovery sometimes in 1830-40 decade, remains the favourite personal transport of many people from all corners of the world. In developing countries particularly, it remains unmatched because of its low purchase cost, almost zero running cost and very little maintenance required.

It is believed that the first mechanically propelled 2-wheel bicycle was built by Kirkpatrick MacMillan, a Scottish blacksmith, in 1839. Since then, people have been trying to make changes in the bicycle design, with very little success. The bicycles of first few decades had their pedals directly connected to front wheel, an arrangement still used in kid's tricycles. A bicycle with both wheels of the same size and a chain drive with pedals provided in the middle, appeared around 1870 and has remained a standard ever since. 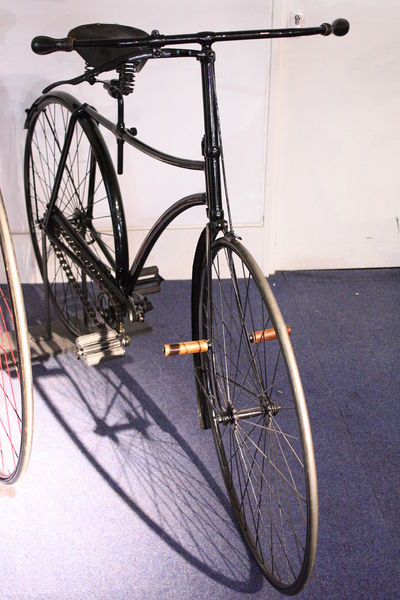 The basic design of the bicycle is so perfect and good that people have now stopped trying to make any changes to it. Designers now concentrate more on the materials used for fabrication. We all know that a standard bicycle is made from steel today. Though it was not so in earlier times. The first bicycles were made of wood. After that, manufacturers changed over to steel tubes. High tech- High end bicycles used in racing, where weight is at a premium, use aluminium alloys or sometimes even carbon fibers.

I want to describe here, two types of bicycles designed from absolutely crazy materials. The first crazy bicycle has been designed by one Mr. Izhar Gafni, who is based in Ahituv, Israel. You might find it hard or even impossible to believe, but he has made his bicycle from normal cardboard. Mr. Gafni is an amateur cyclist and owns a number of high-end bikes. He however wondered, why the original inventors of bicycles had selected wood and decided to build a bike using wood. He then later thought of doing even better and decided to make his bike from something that was essentially made from wood pulp: namely cardboard. He has spent several years now, trying to work out, how to make a cardboard bicycle able to support the weight of a human being. He has developed many special techniques for his bicycle parts.

For making the bicycle frame, he uses commercial-grade cardboard material, made from recycled paper. The trick to increase it's strength is in the way this cardboard is folded many times. He has found out the exact pattern of folding required by using principles of origami. After the cardboard is folded, he treats it with a proprietary design resin that holds it in shape and stiffens it. He later cuts it into the forms of the components required. After the components are fabricated, a second application of resin makes the component waterproof. Finally it is coated with a layer of lacquer, which makes it look good. According to Mr. Gafni, the resulting components are much stronger than components made from carbon fiber. All the basic parts of the bicycle like wheels, handlebars and saddle are made in this way, from cardboard and then fitted together. 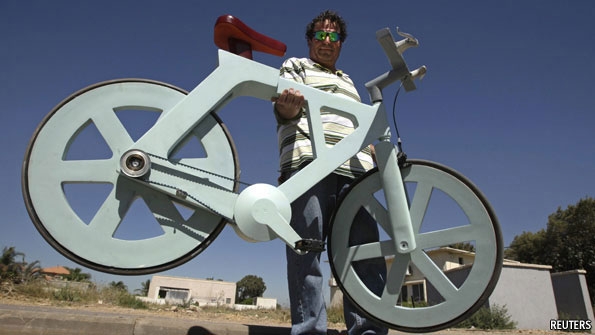 For making tyres, Mr. Gfni is using old car tyres. He recycles them into solid rubber tyres, for his bicycle. In the early days, bicycle tyres were usually made in this fashion. The ride on solid tyres is not as comfortable as with present day pneumatic tyres, but there is no risk of getting a puncture.

For the chain, Mr. Gafni probably was inspired by the rubber timing belt used in a car. His bicycle chain adopts the same design and is also made from car-tyre rubber. The pedals are plastic recycled from empty bottles. And the brakes are also made from some secret recycled materials, which Mr. Gafni does not disclose.

You would not believe it, but Mr. Gafni's finished bicycle weighs just 9 Kg and can carry a rider weighing 220 Kg. He feels that the manufacturing cost for his bicycle should not cost more that $9-12 per unit. He thinks that not only people in poorer countries would go for his bicycle but considering the bicycle thefts that happen in rich nations, it may be worthwhile to buy this kind of bicycle, which costs less than even the lock-chain arrangement used to lock present day high cost bicycles.

I do not know, whether Mr. Gafni would eventually find customers for his crazy bike or not. But there is another California based designer, who is already making bicycles from hemp and is selling them.