The Magnificent Palace of the Peshawa's -The Shaniwar Wada - Part II

(This is an excerpt from a book written by Rao Bahadur D,B, Parasnis and published in 1921. I found extremely absorbing, the detailed description of the Shaniwar Wada of the Peshawa's, given in this book and thought of sharing it with the readers of my blog. The description is rather lengthy. I would therefore cover it in three parts. I request all my readers to read this and enjoy the magnificence of the Peshawa's mansion.)
(Continued from part I)
As the records show, the staff at the Palace or Shaniwar Wada, in 1779 contained the following :
—
480 Royal Guards,
229 Purandar Guards,
325 Kanadi Infantry,
34 Attendants of Royal Stables,
82 Royal Cavalry-men,
224 Infantry men,
76 Attendants,
1,690 Shiledars and bargirs
Thus making up a total of 3,144.
In addition to this there were 300 regular sowars or horse soldiers in attendance night and day. This number afterwords rose to 500. Such was the strength of the Royal household of the Peshwas. As regards the construction and style of the Diwankhanas or halls of this Palace, it may be said that they were generally of one pattern—" Kalamdani" meaning an oblong old inkstand fashion, one central hall with flat ceiling and small compartments with sloping ceiling on four sides. The ornamentation was generally of one pattern. The pillars supporting the main hall were beautifully carved out and shaped like cypress trees, and joined together on the top by engraved arches of exquisite workmanship. The ceilings were covered with beautiful wooden tracery in different designs and were painted with trees, creepers, flowers, scenes from the great epics, the Mahabharat and the Ramayan. Bhojraj, a very skilful artist from Jaypur, was specially engaged for the work of painting these halls.
The main Diwankhana or the Durbar hall in this Palace was the Ganpati Ranga-mahal. It was designed and built by Balaji Bajirao, the third Peshwa, for celebrating Ganpati Festival, in 1755. This historic hall was the scene of many political and social events and the famous picture of the Poona Durbar represents the remarkable assembly held here in 1791.
Captain Moor who visited Poona when the Peshwa's power was at its height describes the splendour of this hall in the following words : 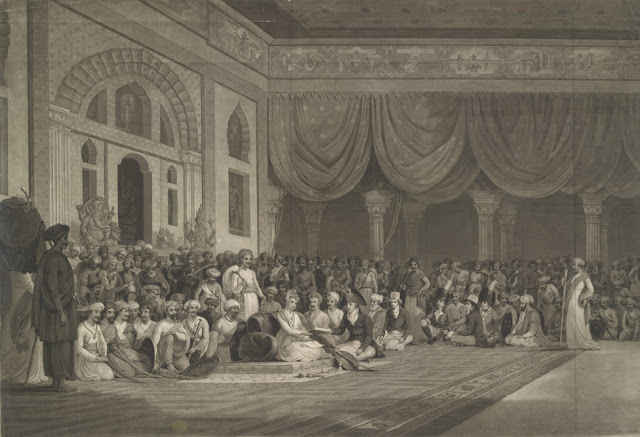 —
" He (the Peshwa) has a very magnificent room in his palace at Poona, called the Ganes room, in which, on particular festivals in honour of Ganes, he receives numerous visitors ; I have seen more than a hundred dancing girls in it at one time. At one end, in a recess, is a fine gilt figure, I believe in marble, of this deity, and many other mythological decorations around it ; the other end of the room, bounded by a narrow strip of water in which fountains play, is open to a garden of fragrant flowers, which, combined with the murmuring of the fountains, has a very pleasing efiect. This room is well designed in Mr. Daniel's fine picture of the Poona Durbar unrivalled perhaps in oriental grouping, character, and costume. This picture was painted for Sir Charles Malet, from sketches by the Mr. Wales ; and the artist has chosen the time when Sir Charles, then our Ambassador at the Court, of Poona, attended by his suite, delivered to His Highness the Peshwa, in full Durbar, the treaty of alliance, ratified by his Majesty, between Great Britain and His Highness ; made, preparatory to the war between the triple allied powers and Tippoo, in 1790." 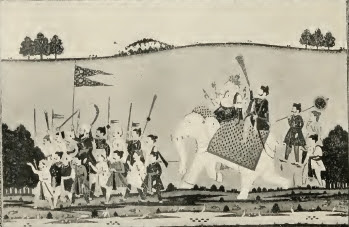