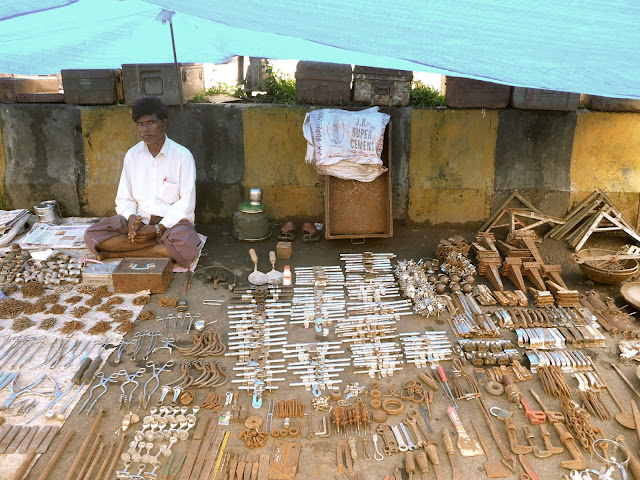 We had one old bicycle in our house, made by the famous British small arms maker, Birmingham Small Arms Company or BSA. The bicycle used to be in working order, but would always break down and would need repairs often. On one of those days, one of the pedal rocker arms that connects the pedals to main driving toothed wheel, cracked and gave up. I took the bicycle to my usual repair shop owner. He nodded his head reluctantly and said that the original English part for this bike is no longer available. I would have to change the complete drive wheel assembly, including pedals etc with India made parts. I came home and reported this to by father. He was somehow reluctant and asked me; “ Why should we change the entire original English made drive wheel assembly, just because one rocker arm has given way? Let's try to find another rocker arm in the 'Juna Bazaar' this Sunday.”

This is how I came to know about 'Juna Bazar' or ancient flee market of my Home town Pune. On next Sunday morning, my father and I rode to the Juna Bazaar on his old Motorcycle. I do not recollect the brand now, but my father's motorcycle had its gear shift lever fixed to right side of the petrol tank and whenever my father wanted to change the gear, he had to draw his right knee away from petrol tank and move the gear shift lever with his right hand, holding the steering handle steady only with his left hand. Quite a tricky arrangement, particularly when there was a pillion rider. My father didn’t think much about it but my mother was always nervous riding pillion with him and made him change the motorcycle. He then purchased another British superbike of those days; 2.5 liter A.J.S.

We parked the motorcycle in an open ground near 'Juna Bazaar' and walked across. Those days it was not required to lock your vehicle at all and my father's motorbike did not even had a provision for locking it. Bicycles would get stolen in those days, if not locked, but no one would touch a motorbike. 'Juna Bazaar' was spread over a large tract of open ground with rows and rows of small time vendors, each with his limited range of quaint looking merchandise. There were sections, which sold old clothes, footwear and furniture. These were of no interest to us and we concentrated on the other rows of traders with their merchandise goods arranged in small heaps on tarpaulins. 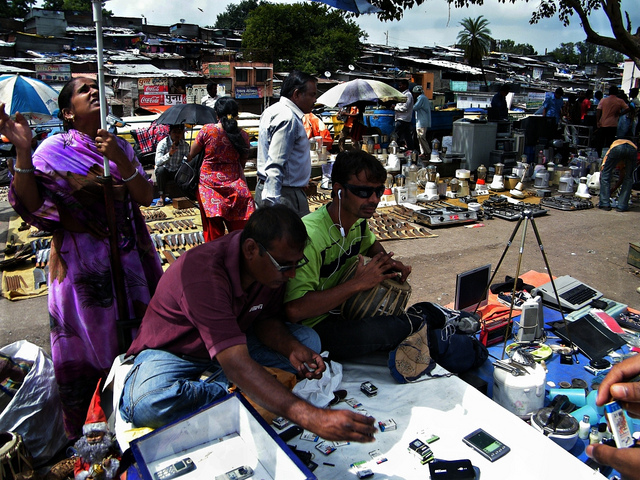 There were vendors who sold electronic parts. Pune was and still is the headquarters of the southern command of Indian Army and an important air base of Indian Air Force. The second world war was then just over about 8 or 9 years before and lots and lots of military junk was being auctioned by the military establishments. Old wireless sets and signal equipments and spares from these auctions found their way in this market. The electronic goods always looked so fascinating even then to me. It is possible that my fascination for electronic stuff seen in 'Juna Bazaar' could be one of the reasons for my choosing electronics as a career later.

Besides electronics stuff, there was lots of other military stuff. Condemned tarpaulins, khaki clothing, kit bags and ammunition boxes made from steel. There were heaps and heaps of the stuff. These steel ammunition boxes were in particular very popular for small shop owners for keeping things in shops. I also saw hawkers selling household stuff. Old alarm clocks, utensils, kettles, buttons, spoons, Durries of military origins.

Then there were hawkers selling small tools such as carpenter's tools, files, saws, pliers and spanners both worn old and refurbished and painted. Finally we saw few hawkers selling bicycle parts. My father took out from his pocket the cracked rocker arm from our bike and physically tried to match it with rocker arms lying in heaps, some still bright with their original chromium finish shining, some rusted. He finally picked up two pieces, which had embossed letters B.S.A still intact and asked for the price. Rs. 5 for two was the reply. My father just threw back the rocker arms and told me lets go away and look somewhere else. Hawker again collected the pieces from heap and offered them to my father and asked for Rs. 2 . The conversation went on for next 15 minutes and finally the price was settled at 4 Annas (One quarter of a Rupee.) My father paid up, collected the rocker arms and then told me to buy whatever I want. My budget would be 12 Annas (¾ Rupee). I do not recall exactly what I bought, but I must have bought quite a few things because my mother later scolded both of us for buying unnecessary junk. My father too bought some electronic stuff, I remember. 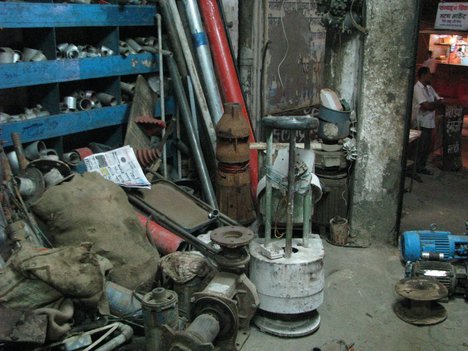 Next day I went to bicycle repair shop and showed him the rocker arms. He agreed to try and fit them and after another couple of days, our old BSA bicycle was working beautifully again. For next 10 or 12 years, as long as I was staying in Pune, I always made trips to 'Juna Bazaar' to buy useless unnecessary stuff. I realize now that the real fun and enjoyment of those shopping excursions was in the deal making and not in the stuff, which I bought and was mostly useless and unnecessary.

Only few days ago, I passed through the old 'Juna Bazaar' area. The flea market still gathers there on every Sunday and Wednesday. But all old glory is gone now. A busy street now passes through the middle of the area, which has pushed the vendors and hawker to sidelines. It is no more the Alladin's treasure land of old days and has now become another market for cheap clothes, furniture and household stuff and footwear. No military stuff comes there for selling anymore, neither electronics junk, What you get now includes mobiles, calculators and computer parts.

Things change with time and we have to accept it. But, even now, whenever I pass through that area pf Pune city, where 'Juna Bazaar' reigned supreme on Sundays and Wednesdays, I still miss my old 'Juna Bazaar' with its wide and bewildering array of stuff available for sale.

(Photographs given here are picked up from net and may not be of 'Juna Bazaar' I have referred in here. )
20th April 2013