New Custodians of traditions and culture 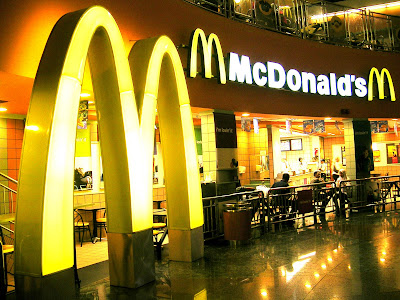 Would you ever believe that a US multinational food chain that operates in more than 100 countries of the world and who has been in the forefront of popularizing and spreading American pop culture and junk food, would change and actually start promoting local culture? Well that is what exactly happened in Pakistan's port city, Karachi.
Noman Ansari , a Pakistani citizen, who spent his formative years in Saudi Arabia, was returning home from a friend's birthday party a little after midnight last week along with his wife. They decided to stop at Karachi’s newest McDonald’s restaurant for some Diet Coke. Rather than getting it through the drive through and drinking it in the car, they decided to have the drinks inside, as they were a little curious about the new McDonald joint.
After getting the drinks from the cashier, they decided to sit at a seating booth at the far end, located next to a TV. His wife sat on a seat and Mr. Ansari, instead of sitting on a parallel seat across the table from her, sat next to his wife. And while sipping his diet coke he actually put his arm behind shoulder of his wife, watching TV. Within few minutes a McDonald’s employee came up to them and very politely asked them to move. Initially, Ansari's thought that they were blocking other patrons from viewing the television, so they moved to another adjacent booth and sat there in the same way as they were sitting earlier.
Surprisingly, same McDonald employee approached them again and told Mr. Ansari that he wasn’t allowed to sit next to his wife, but rather, should sit on the chair opposite to her, across the table. Mr. Ansari gives the transcript of his conversation in his blog and I quote.
"Sir, this is a family restaurant. Couples sitting together is against the policy of McDonald's Pakistan, as it goes against the family atmosphere of the restaurant."
“What? But we are married (not that it is any of your business)."
“I am sorry sir, but you can’t sit side by side.”
Later when Mr. Ansari went to complain to a pair of managers about this strange diktat, they told him that his behavior constituted "a negative impact on the Islamic family atmosphere of McDonald's," he writes. 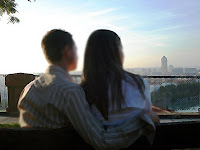 There is nothing really for me to comment about this incident, because from place to place the customs and traditions change. Even in India perhaps, Mr. Ansari's behaviour would be frowned upon in many places, if not objected to.
But what I find strange and interesting is that this discourse on proper behaviour has come from a restaurant chain, which has 33,500 local restaurants located in 119 countries, and serves nearly 68 million people a day. For the younger generations of many countries including India, eating burgers and drinking soda's have become a sort of “ must do” to show that they are in tune with the times.
Global post has reported that Pizza Hut Pakistan revised the details of its Ramadan all-you-can-eat special in an effort to cut down on the "gluttony and waste" the chain was observing among patrons. Recently I saw advertisements in news papers saying that McDonald is now offering all veggie burgers in their restaurants in India and there are news reports that they want to start Veggie only restaurants in some religious places. I wouldn't be surprised to have full Jain ( No Garlic, Onion or Ginger) burger from McDonald in the future.
What is important is to realize, how flexible these multinationals are becoming. If you go to a McDonald restaurant in a place like Singapore, it would be impossible to find a single dish in their entire menu (Excluding tea, coffee, soda's and ice cream off course) that is purely Veggie. Yet the same McDonald is now offering 100% Veggie stuff in India.
Perhaps this adoption to local conditions, traditions and customs is the key to their world wide success. At least I would think so.
14 September 2012
at 8:44 AM