How ancient Buddhist rock cut temples of Maharashtra were constructed? 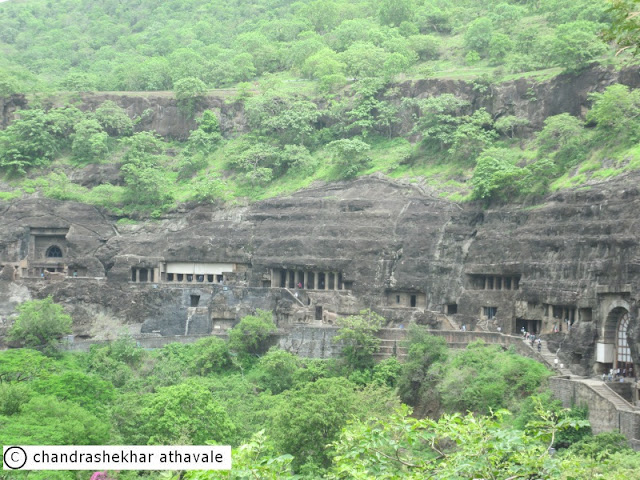 A couple of years back, I took upon myself a task of visiting  many of the rock cut Buddhist temples in Maharashtra state of India, excavated on near vertical cliff faces,  situated along the forested deep valleys of the Western Ghat, Satamala and Kannad Ghat mountains in western and northern parts of the state. These included, Karle’n, Bhaje, Ajanta, Nashik and Pitalkhore rock cut temples.
Visiting these rock-cut temples is not a particularly easy or simple task. For example in Karle’n and Bhaje, one needs to climb a stiff mountainside before one can hope to reach the excavated caves. In Pitalkhore, one has to go to the trough of a deep and wooded valley before the caves can be even seen.

I often wondered how these rock cut temples were constructed or excavated as all these have come up in the period from 300 BCE to around 300 CE, with the possible exception of Ajanta where excavation work went on for much longer period. All these rock cut temples were excavated in remote jungle areas and must have taken hundreds of years to build. This means that the monks and the labourers employed by them, had to live on the cliff sides for years, which were difficult even to approach. It must have needed a tremendous effort just to organize the logistics of this kind of endeavour. 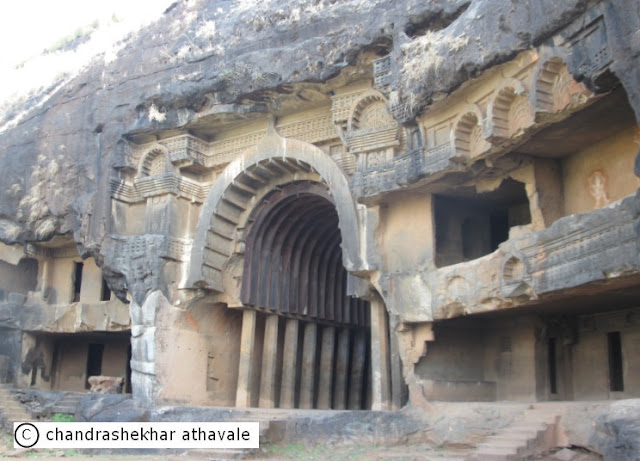 This week, I chanced to see some photographs uploaded on the net by “Discover China,” an official Chinese agency involved in media/news and publishing. These photographs really set me thinking and gave me the clues regarding construction of the rock cut temples of Maharashtra. The photos showed the Hanging Temple in Mount Hengshan, China’s Shanxi Province, which was constructed in between the fourth and sixth centuries CE, almost in the similar time frame, when rock cut temples in Maharashtra were excavated. 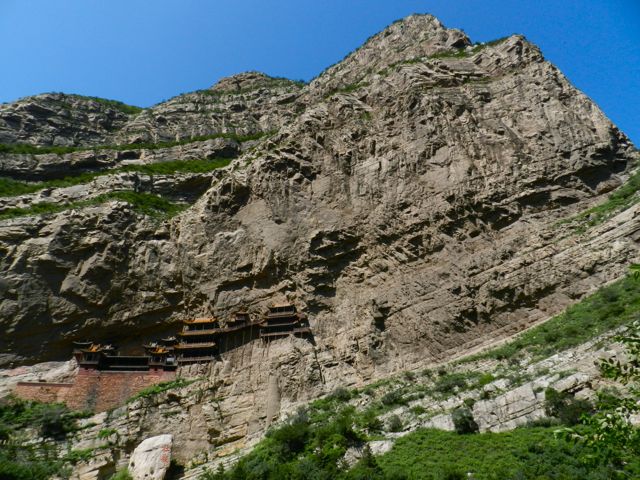 The Henshan Hanging temples, built on a cliff side, which is 75 m or 246 ft above the ground, have been constructed totally out of wood as that must have been the only raw material available to builders then. What makes these temples so interesting is their vicinity to the famous rock cut temples of the Yungang Grottoes, the ancient Chinese Buddhist temple grottoes. 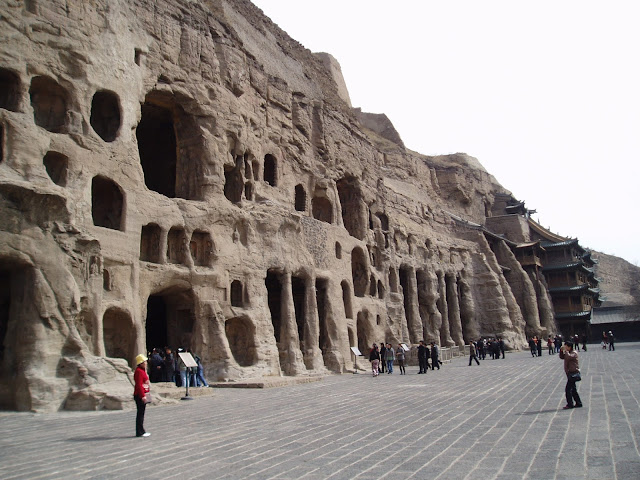 Yungang Grottos, excavated in fifth and sixth centuries CE are considered as one of the three most famous ancient Buddhist sculptural sites of China,  besides grottos of  Longmen and Mogao. The Yungang caves have a remarkable resemblance with Ellora caves, near Aurangabad city in India and boast of 252 caves with more than 51,000 Buddha statues and statuettes. UNESCO considers the Yungang Grottos as masterpiece of early Chinese Buddhist cave art that represents the successful fusion of Buddhist religious symbolic art from south and central Asia with Chinese cultural traditions and has awarded it the status of a world heritage site.

The Yungang  grottos are located 16 Kms west of the Chinese city  of Datong in the province of Shanxi, whereas  the Henshan Hanging temples have been constructed  near mount Hengshan located 64 Kms northwest of the same city. This means that both these ancient places are in the vicinity and were built in the same time frame. It may not be totally inaccurate thing to say that similar techniques were perhaps used for construction of these places. 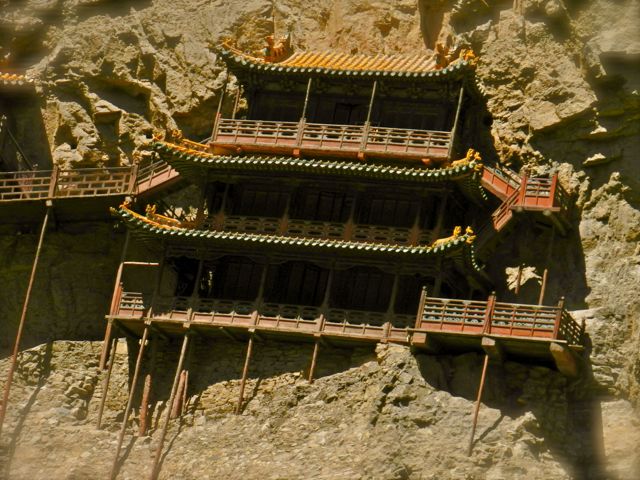 Coming back to Henshan temples, the temple has been erected on oak wood pillars with the structure kept in place with oak crossbeams fitted into holes chiseled into the cliffs. The main supportive structure is hidden inside the bedrock. Wikipedia says that the monastery is located in the small canyon basin, and the body of the building hangs from the middle of the cliff under the prominent summit, protecting the temple from rain erosion and sunlight. 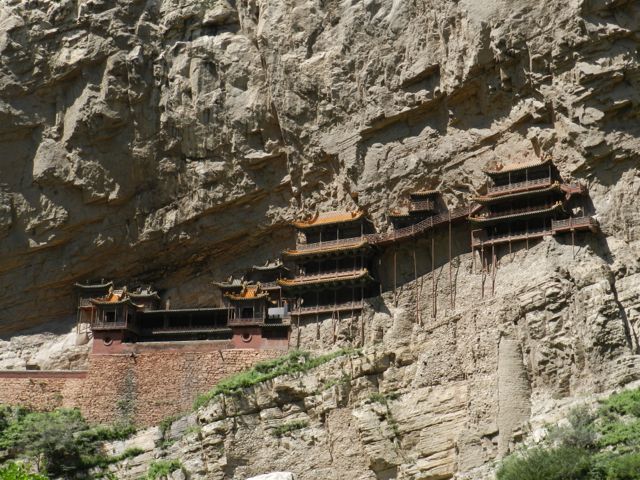 The structure looks so delicately poised that it appears impossible that it has survived for last 1400 years. The reasons for its survival are obvious. It has been well maintained by the Buddhist monks with patronage from successive Chinese dynasties and Governments because Buddhism still continues to be one of the dominant religions of the country. 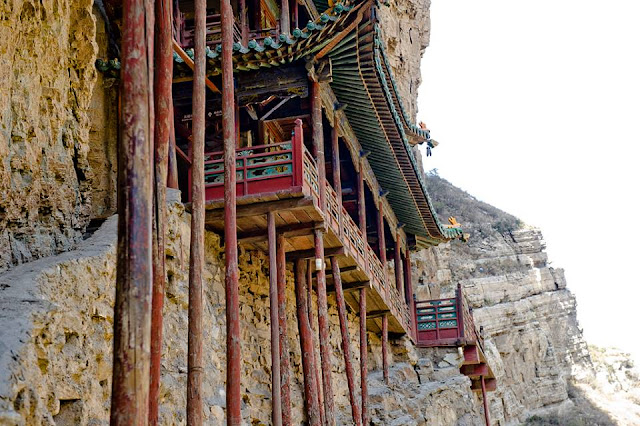 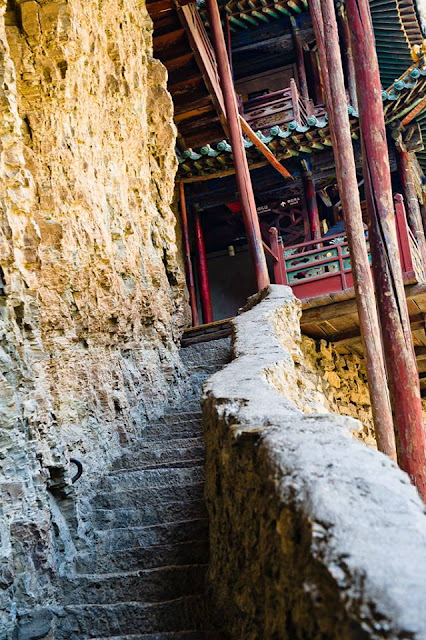 Compare this with rock cut temples of Maharashtra. Buddhism started declining around sixth century CE in India. Famous Chinese traveller Xuen Zhang mentions about this in his travel book regretting the fact that Buddhism is on decline in the land of its origin. No wonder that the Buddhist rock cut temples in Maharashtra slowly lost their patronage over centuries and were abandoned one after another. Today, by looking at the caves it is impossible to imagine their former glory.
That is why we need to look at Chinese ancient structures to give us a glimpse or an idea of how ancient Indian Buddhist structures must have looked like. Henshan hanging temple, I think, is one such perfect example that can tell how Ajanta, Ellora and Pitalkhore were constructed and  must have looked in their glory days.