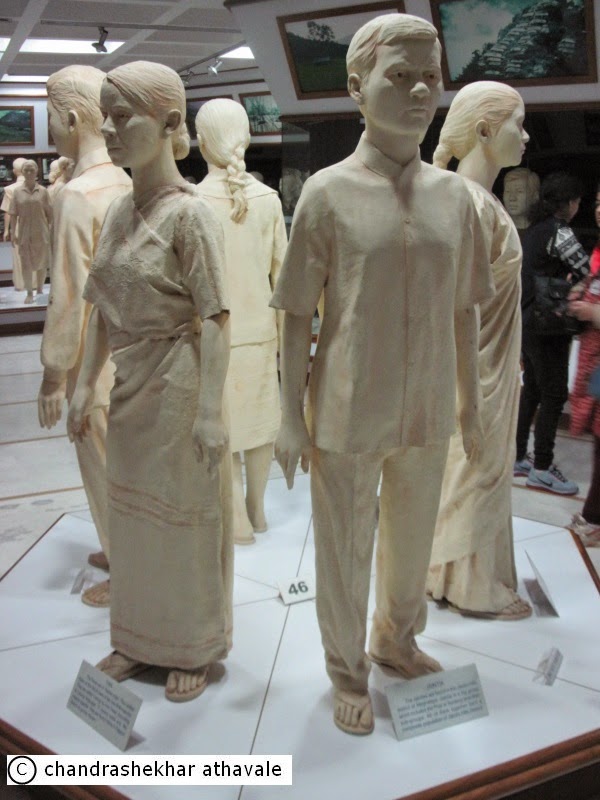 In the year 1962, when the border war with China broke out, I was still studying in the college. It was then that most of people from India became acutely aware, perhaps for the first time, about the North-east region of India and particularly the region of NEFA or orth-east frontier agency, which till then was just an area in the north-east corner of the map of India. Ladakh sector, which was another theatre, where war had also broken out, was relatively known to people, because of Pakistan aggression in 1948.

In the later decades, the region came to limelight, unfortunately only for the wrong reasons like armed struggles and insurgencies of the Mizo and Naga tribes, huge illegal migrations of Bangladeshi Muslims, large scale smuggling across Myanmar border and finally all pervading repeated floods of the mighty Brahmaputra river, which caused unimaginable devastation every year. 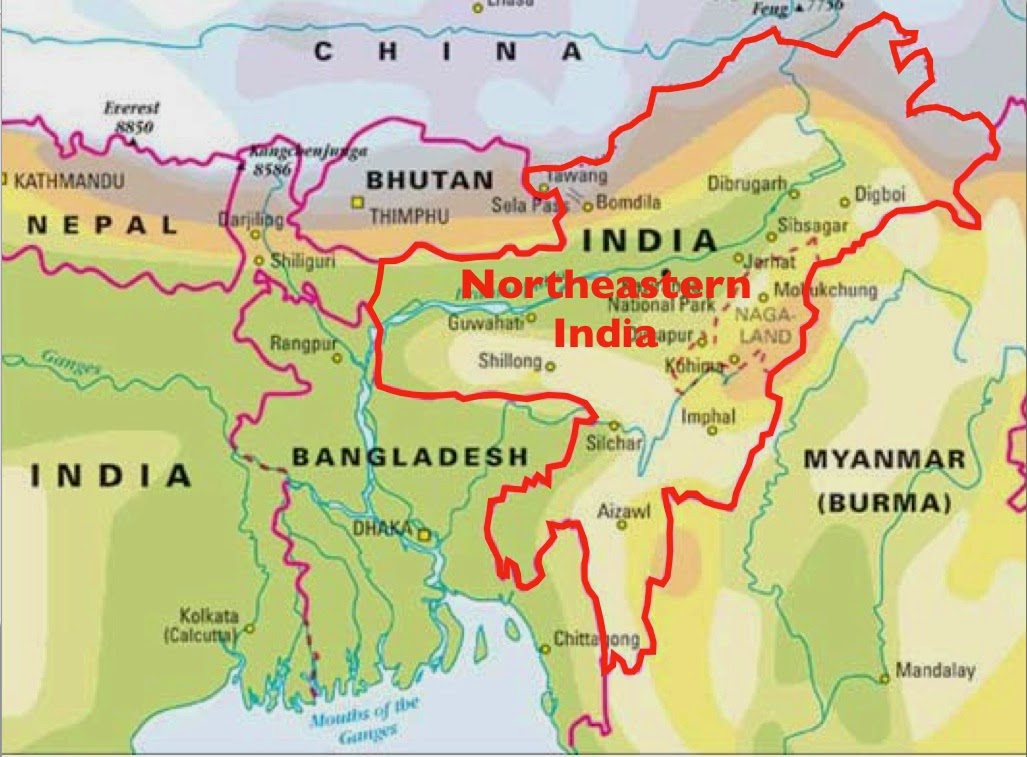 Over the years I have been rather keen to visit both these theaters of 1962 war
and pay my homage to the soldiers, who had fought great and heroic battles against better equipped and numerically strong Chinese army. However it was practically impossible over all these years, for anyone to get Government permissions for visiting these sensitive border areas. Both these regions, namely Ladakh and NEFA, now rightly renamed as Arunachal Pradesh or land of rising sun, as it is the first region of the country that sees sunrise every day, require a special permit known as inner line permit to be obtained if one wishes to visit these regions. It is only now that the Government policies have been somewhat relaxed and tourism is easily possible.

I did my Ladakh trip, couple of years back and could visit Nubra valley and Pangong lake areas fulfilling my long overdue wishes. During that visit, I had paid my homage to brave and heroic soldiers at the war museum in Leh and also on the pristine bank of the mighty Pangong lake. A battle, which can rightly be called as mother of all battles, was fought only a few miles away from here at Rezang La by Maj. Shaitan Singh and his company. On the banks of this lake I had decided also to visit Arunachal Pradesh at an earliest opportunity and complete my so called pilgrimage.

The opportunity came up this year, when an old group of friends were planning a visit to North-east and asked me, whether I would be interested in joining them. All formalities such as Inner line permits, selection of tour operator and the reservations were to be arranged by them. Absolutely thrilled and overjoyed at this God sent opportunity, I accepted the offer almost immediately and finally here was I, on my Spicejet flight to Guwahati, capital of the Assam state of India, famous for its tea and one horned Rhinos.

Flying to Guwahati from my home town Pune is not a simple one hop affair. Even by road, the distance works out to more than 2500 Km. By air, one has to fly either to Kolkata or Delhi and then on to Guwahati. We had selected the later route because it involved shorter waiting at Delhi. Thus, earlier in the day, I had reported at Pune airport around 5.45 AM for boarding the Spicejet flight to Delhi taking off at 7.25 AM.

The flight to Delhi was smooth and uneventful with our arrival at terminal one, around 9.45 AM, even though the seating and particularly the leg space were far from what could be considered as comfortable. The arrangements for transit passengers, who have booked for onwards flights are bit weird at this terminal. You need to exit the airport, take a long circuitous route, go up in an elevator to reach the departure lounge. Since the scheduled arrival time at Guwahati was after 3 PM and we had a layover period of more than 2 hours at Delhi, we utilized the same to enjoy some nice stuffed "Alu Parathas" followed by spicy tea.

Our next flight from Delhi was announced in time. We trooped out to the aircraft, but saw the port side wheels of the aircraft removed and the aircraft partially sitting on a jack. We were still asked to board the aircraft. I was given a seat next to a window on the port side, from where I could clearly see what was going on. Some technicians in fluorescent yellow jackets had arrived with a lift platform and had brought along a huge white drum like thing, which had looked like a wheel brake drum to me. Another half an hour had passed and nothing had happened. We kept sitting in the congested seating space inside the aircraft. Finally an announcement came over PA system that we were leaving and I had heaved a sigh of relief.

As expected, the two and half hour flight to Guwahati is turning out to be rather boring and dull, as there is not much to do. Many of the co-travellers have dozed off. Unable to sleep, I switch on my trusted iPod and get lost in the melodious world of Indian classical music. After flying for about two hours, we are being told that we shall be soon landing at "Bagdogra" airport, a transit stop really. The Bagdogra airport is situated amonst lush greeen foliage and surroundings appear refreshingly green. This airport is a military airbase and I can see many helicopters standing on the tarmac. After a delay of about 40 minutes or so, we are airborne again.

A passing show: Himalayan peaks as seen from the aircraft window

From my port side window, I look out. At an altitude of about 36000 feet, there is nothing much to see except for the white floating clouds that appear at a much lower height. I glance at the horizon, which is actually towards north as we are flying eastwards. Accustomed to see, when flying at these kind of heights, only bright blue sky above the white floating clouds, I have a surprize of my life when I see snow clad mountain massifs, ridges, spurs and peaks bursting out of the sporadic cloud cover below, almost in a continuous line.

There is no doubt in my mind that, what I am watching through the window is a grand passing parade of the massifs and spurs of the mighty Himalayas. A breath-taking show by any standards. The Himalayas are so huge and so much above my wildest imagination that there is no other feeling in my mind except feeling of extreme humbleness as I see this greatest spectacle on earth.

As the Himalayan splendour ends, another one begins, though on ground below this time. I can see the mighty Brahmaputra river with width stretched for miles. As this is the low water season, I can see many sandy islands formed within the river bed. This river forms one of the major river systems on the earth and flows for a distance of 3900 Km before emptying into Bay of Bengal. 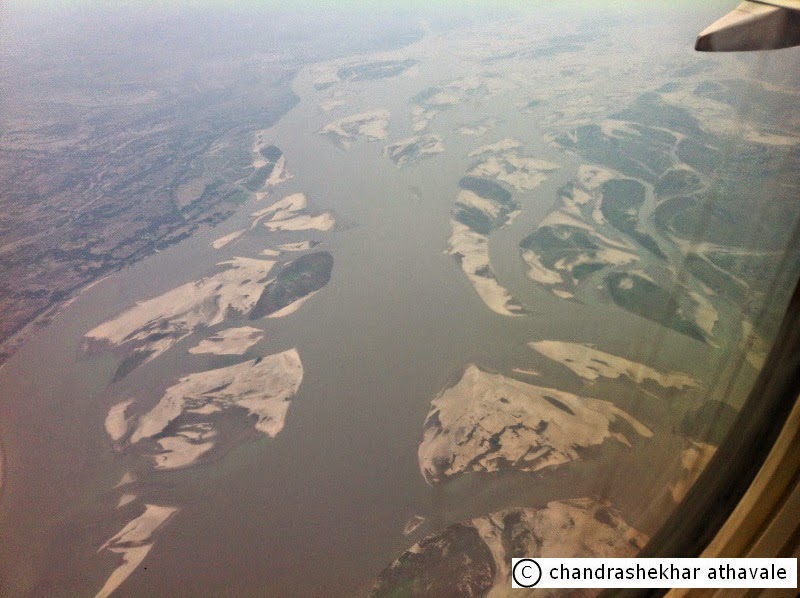 Soon announcement comes that we would be landing at Guwahati's "Lokpriya Gopinath Bordoloi" airport. The landing is quite smooth, though the aircraft gets parked at some far away remote portion of the apron and some rickety buses appear on the scene to take us to the terminal building situated far away. Since our baggage would be taking the same route, I know that there is long wait. We all decide to have some excellent Assam tea, refreshing brew at its best.

The bags finally arrive and we walk out of the arrivals area, where we are welcomed by our tour guide, who would accompany us for next 10 or 11 days. We troop out again with our unwieldy baggage trolleys to a parking lot. I find eight gleaming white Toyota Innova SUV's waiting for us. We walk to the car allotted to us. I am welcomed by the driver with a bouquet of Xenia flowers, a gesture that is a good marketing move by any standards. Our driver, Mr. Mridul, a youthful guy, has a pleasant face and I feel confident as he would be driving us over next 10 days over some of the most treacherous roads on the surface of our planet. We are also given packed snacks.

But, before we start, we find that one of the rear wheels of our car has gone flat. The wheel is changed in 10 minutes or so and we are off on the road, which leads directly to Guwahati city. The time is around 4 PM and its already dusk. Soon it would be dark. We branch off on highway NH 27 and after about an hour's drive reach Jorbet, a small town. We break here for a cup of tea. As we are enjoying our cuppa, torrential rain lashes the town. The place, where we are having tea has tin roof that amplifies the hammering of the rain to such an extent that I find it difficult even to hear what person sitting next to me is trying to say.

Soon its dark and there is nothing to see on roads except wait for our journey to end, a distance of about 130 KM. The road is quite bad with construction work going on over the entire stretch of the road as it is being converted into a 4 lane highway, when it should take probably just a couple of hours to reach Shillon. But as of now, the road is terrible and dust pervades everywhere. Finally after a long boring journey stretching to about 4 hours, we reach Shillong.

As I step out, I find the night at Shillong to be quite chilly. So its time for a quick dinner and I am off to warmth of a room with a heater. It has been a long day and sleep takes over in just a few seconds.