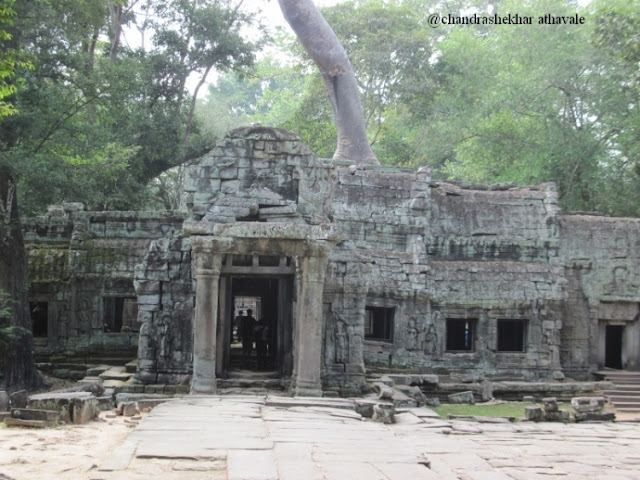 I paid a visit to Cambodia's Ta-Prohm temple ruins in November 2010. Today, even after a lapse of twenty or twenty one months, I can still remember vividly, the finest details of this mammoth temple, totally destroyed by a jungle, which grew on it. After entering the temple complex from the east gate and after walking some distance, I had my first view of Ta-Prohm. There was a stone platform ahead of me. On top of the platform a dilapidated stone building stood with a huge tree growing out of it. The view was just fit to be a shot in an Indiana Jones type Hollywood potboiler. In fact several movies have been shot at Ta Prohm. The latest one being Angelina Jolie’s Tomb Raider. After entering the building, I could see how this huge tree had spread its roots on the building, holding it in a vice like grip. Many years ago, I had seen a film called “20000 Leagues under the Sea”. In this film a huge squid or an octopus was shown with long tentacles. Trees of Ta Prohm reminded me of that creature. 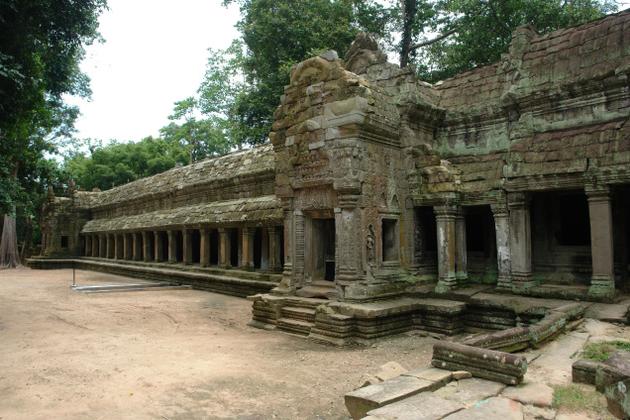 Ta-Prohm, ( word “Ta” means ancestors and word “Prohm” originates from Sanskrit word Brahma, Hindu god of creation) during its glory days was incredibly huge and also incredibly rich. A Sanskrit inscription on stone found here, tells us its story. Ta Prohm owned 3140 villages. 79365 people lived in these villages and maintained this temple, which included 18 high priests, 2740 officials,2202 assistants and 615 dancers. Among the property of the temple, there was a set of gold dishes weighing more than 500 Kg, 35 Diamonds, 40620 pearls, 4540 precious stones, 876 veils of silk, 512 silk beds and 523 parasols. I do not know whether the figures given in the inscription are true or not. One thing is certain. The temple was extremely wealthy. A Tirupati temple of sorts, of those times perhaps. It was also one of the largest monastic complex during Khmer days. The temple complex is 1150 meters long and 663 meters wide. It was constructed in form of concentric enclosures and housed as many as 39 smaller shrines with vimanas, galleries, the hall of dancers etc. There was also a causeway joining third and fourth enclosures. The temple was built by Angkor King Jayavarman VII, who ruled during 1181 to 1220 CE, and was dedicated by him to his mother. He named it as a royal palace or 'Rajvihara'. The principal deity here was Buddhist goddess 'Pragnya Paramita' , a goddess of wisdom. King Jayavarman VII, a Buddhist, was succeeded by Jayavarman VIII, a Hindu. He systematically destroyed the Buddha images at Ta- Prohm and today it is not clear wheather Ta-Prohm was a Buddhist or a Hindu temple. During my visit I had seen at one place, a Unique Lintel decoration, with the Trinity of Hinduism, Bramha-Vishnu -Mahesh., with central figure of Vishnu missing from the decoration, perhaps stolen. All this magnificence was so thoroughly destroyed by the ever growing jungle onslaught of massive silk cotton trees that what is left are few dilapidated stone buildings along with heaps of stones. These killer trees grew on Shrines, Vimanas, and uprooted many a structures such as galleries. In the jumbled heap, lying on the ground, I could see broken pillars with beautiful bass relief carvings still intact, lintel beams, and remnants of of Corbelled roofs, caved in.
I had seen, at entry point to the temple, a signboard , which proclaimed that the Government of India and Cambodian Government are co-operating to renovate this temple. I had felt happy about it then but could never judge the actual great work done by Archeological Survey of India in Ta-Prohm. UNESCO included Ta Prohm in the World Heritage List in 1992. As per UNESCO policy, safeguarding the authenticity of the monuments was of utmost importance. They therefore put restrictions; that no tree should be cut during restaration, so that the people can see here, how the trees and the complex coexist. The ASI team , which arrived from India in 2004, is now doing the restoration job as a partnership project of the ASI and the APSARA (Authority for the Protection and Management of Angkor and the Region of Siem Reap).
Before taking up the work at Ta-Prohm, ASI team studied thoroughly, behaviour and tendency of the monument, how the structures were built, their methodology and technology, their stability, the materials used in their construction, the necessity of conservation and the quantum of conservation work. They checked on the causes of neglect. They took help from Forest Research Institute, Dehra Dun, to prop up the trees that had grown on the structures. Water and Power Consultancy Service Limited, New Delhi, for hydrological and ground-penetrating radar studies to understand the movement of the roots below the soil. The Indian Institute of Technology, Chennai for resolving the structural stability of the monument.
The first building that was taken up for restoration was a completely collapsed, rectangular shaped gallery in the third enclosure. Corridor’s rear wall, decorated with bass relief figures from mythology, only stood. Everything else such as corridor, Corbelled roof and two parallel rows of pillars had collapsed. ASI team, assisted by about 200 skilled and semi-skilled Cambodian workers set to work. After documenting all details, gallery's fallen stones were moved by a crane. All parts of the gallery were documented. Each and every fallen stone was numbered, measured for all dimensions and weighted. The broken stones were rejoined by re-enforcing them with steel rods. Then like a three dimensional jig saw puzzle, it was found out to which part of the gallery a particular stone belongs. All Angkor monuments including Ta-Prohm had been built of interlocked sandstone blocks without any binding material. So while reconstructing the gallery no mortar or any binding material was used. The restoration work, which began in 2007 was completed in 2010 when the gallery and the causeway with balustrades, connecting the third and fourth enclosures were fully restored. 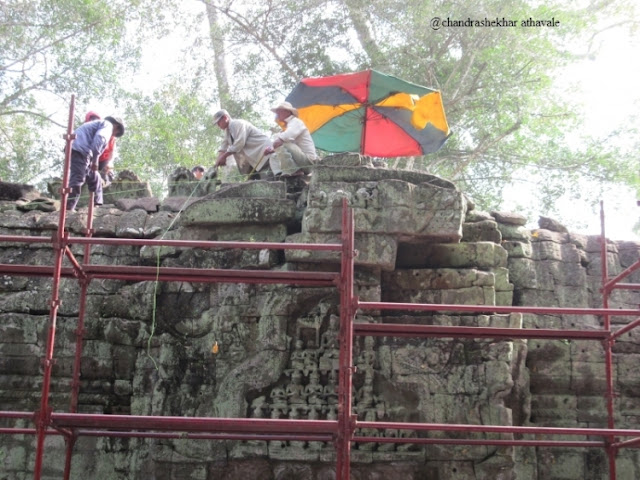 It was decided next to restore a building known as the Hall of Dancers. Actually the name is a misnomer. The hall was not meant for performing dances. Monks used it for meditation. This building was in a very bad shape. The roof had caved in. There was no access to go inside and on one side, a massive tree stood inside the hall. The ASI team again meticulously set to work. The hall was restored block by block. They found that some sandstone blocks were missing. ASI team got new stone blocks made from rocks quarried from the original source of rocks used by Khmer Kings: the Kulen mountains on Thailand- Cambodia border. UNESCO wanted to retain the tree grown inside so that people would know how the building looked before restoration. ASI would be restoring the roof only on right side. ASI is also restoring the Gupuras or towers above east and west entry gates. 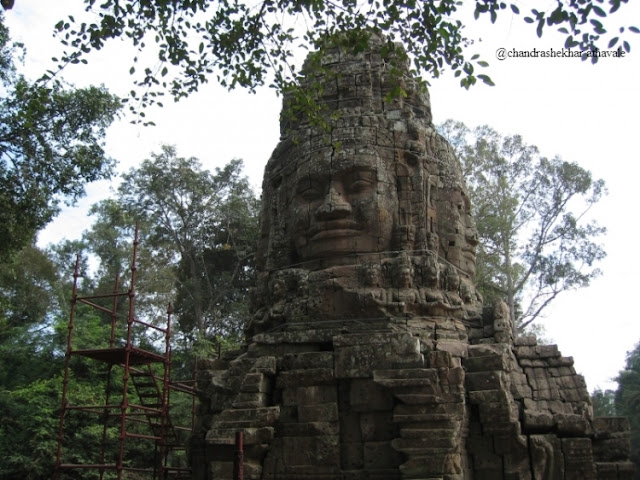 Kudos to Indian Government for making this great effort to restore this precious heritage of the mankind, particularly when it bears such direct relationship with ancient Indian culture and traditions.
16 August 2012
at 9:24 AM