A Book written by me about the epic journey
of the 7th century Chinese monk Xuan Zang
(玄奘) to India. 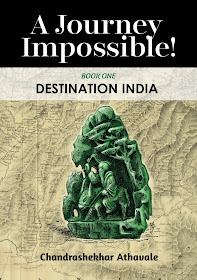 In the early years of the seventh century, a young Chinese monk escaped from Imperial China, much against the wishes of the Emperor, to embark upon a journey to India. He braved a certain death like situation in a harsh desert, survived   attacks of bandits, to reach borders of India. From here, he began his quest for a Guru, who would lead him to the sutras as told by Shakyamuni Buddha himself. His journeys, taking him over northwest and north India, finally ended at the famous university of Nalanda, where he studied for a period of five years to achieve what he had cherished.  His newly acquired fame soon reached the ears of the Emperor of north India, Harshavardhan, who requested him to carry out a task of bringing peace and harmony amongst religious sects of India.  The conference at Kanyakubja, where the monk prevailed, was the ultimate triumph for him. This is the story of this remarkable monk and his journey to India that took sixteen years to complete.  A journey, impossible! 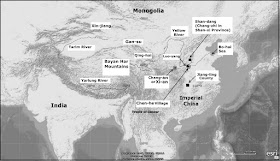 India perhaps is the only ancient civilization that has left behind no written chronicles of any type. Chinese empire has left behind, unbelievably immaculate records of their empire and its history. In the Middle East, we find Arab and Persian historians duly recording their observations, at least after onslaught of Islam. What do we have in India? Except for “Rajatarangini”, the chronicle of kings of Kashmir, all we have are the “Puranas” with their scanty and scattered bits of information.  We do have treatises like that of “Panini” and “Varah Mihira”. Yet the information they give cannot be said to be always accurate. Similar is the case with our epics like Ramayana and Mahabharata. Xuan Zang appears like a lone star, in this depressing scenario.

Books on Xuan Zang can be divided into three types. Firstly, we have translations of his manuscript (and that of Hui Li) done in French and then subsequently translated in English; like those of Julien and Beal with their copious comments. The second type of books consists of interpretations and commentaries on the original manuscripts. Examples of this type are those authored by Levy, Chavannes and Thomas Watters. Then, in the third type, we have travelogues of historians, archaeologists and just plain persons, who actually took pains to travel by the route indicated by the monk to the extent possible, simply because of their interest in the monk, his life and his itinerary. In this category, we have books of legendary people like Aurel Stein, A. Foucher, Alexander Cunningham and finally Indian author Mishi Saran. 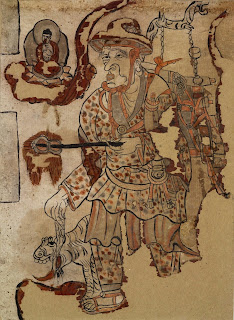 Most of the books were written in nineteenth or early twentieth century, when cartography had its obvious limitations. Almost all historians based their accounts on available maps done by someone else and with unknown accuracy. I must admit that in most of the cases, the historians did a remarkable job, yet there were gaping holes. Xuan Zang’s travel through Maharashtra in India is a prominent example of one such gap. Until date I have not came across any attempt to identify monk’s route or places here. Availability of satellite imagery today has brought about such a revolutionary change to cartography that verification of a route that has not been done so far should be possible now, sitting in an armchair.

During twentieth century, a lot more archaeological research has been carried out in India. This has brought to light some new places, which should be included in the monk’s itinerary. Sanghol in Punjab and Chandavaram in Andhra Pradesh state of India can be considered as prime examples of such places that have been discovered lately.

With these thoughts in my mind, I decided to give a try to see, if I could compile the information that is scattered around in form of many books (written over last two centuries) and add something more to it, not because I am very knowledgeable in history or archeology, but I happen to have an access to modern cartographic tools. I must admit that I am not even a novice, when subjects like Archeology and History are concerned and have totally relied on the legendary experts of the past. This work in three volumes is the result of my efforts for more than two and half years. 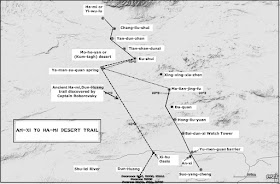 "The bandits came from nowhere. As Xuan Zhang and his troupe negotiated the narrow zigzag slopes of the silver mountain, where sharp turns on the road around the cliffs could effectively hide the view ahead, they heard a big commotion with clip-clop of horse’s hooves. Next moment, before they knew anything, the troupe was attacked by robbers riding horses and waving their naked swords. The mounted robbers in tattered clothes surrounded the troupe, shouting and threatening them with their drawn out swords. Everyone stood still. Robbers dismounted and started searching everyone; their clothes, belongings, even the food they were carrying. Xuan Zhang felt pangs of fear inside, cutting him like a cold steel blade of a sword, but only just for a moment. Next moment, he calmed down, praying to “Guanyin.” He looked steadily at the robbers with his sharp piercing eyes. The chief of the bandits, briefly looked at the monk; something terribly disturbing him. He felt that this was no ordinary man and this was no ordinary caravan either. All of a sudden, he was scared to the core that continuing here any longer would certainly bring God’s wrath on him and his men. He signalled his men. The bandits disappeared as quickly as they had come. Everyone let out a sigh of relief and started counting their losses. But losses were not important; their lives were saved."

"You cannot separate Mathura from its idol, Krishna, a God from Hindu mythology. Krishna is the tutelary divinity of the city, but for the people living in the city, it is a way of life. The city lives Krishna. It breathes Krishna. Every year, it celebrates birth of Krishna as if he is really being born on that day. It plays colours on the auspicious day of Holi, the way poets have imagined Krishna playing it with his shepherd playmates and ever-loving milkmaids. The city is believed to be his birthplace and the tale of his birth is as spectacular as it can be. Krishna is supposed to have grown up in a colony of milkmen in the environs of the city. He is imagined as a jovial, kind and humane personality for his parents, playmates and votaries, yet he can destroy even the mightiest of their foes easily. No wonder, the writers, poets, sculptures and painters have been having (and continue to have) a field day for more than a millennium with this lovable God. Over the centuries, they have created millions of works of art, such as fiction, poetry, and paintings in almost all Indian styles that feature Krishna as hero".

"In his state of ecstasy, our monk had even forgotten the altar on which he, tied with a rope,  was made to sit and the reality that he was surrounded by most cruel looking brigands, who wanted to execute him as a human sacrifice. A few minutes before, knowing that it was now the time for his departure, he had requested his executioners to give him some time so that he could pray to his lord, before he was gone. He now looked perfectly calm and composed. The puzzled robbers, surrounding him, looked at him with great wonder and astonishment. They had never before seen a human sacrifice so calm and happy with a smile on his face".

"All the buildings in Nalanda University were majestic in their size and height with richly adorned towers, fairy-like (delicate) turrets appearing like pointed hilltops, and observatories lost in the mist of the morning. The upper rooms towered above the clouds and from their windows one could see the winds and clouds producing ever new forms and from the souring eves the sunset splendours and the moonlit glories. All the outside courts in which were the priest’s chambers were in four stages (Four storeys that looked like an inverted staircase, so that the top storey projected out least). The stages had dragon projections (Supporting brackets projecting out were carved with dragon figures) and coloured eaves, pearl red pillars- carved and ornamented, richly adorned balustrades, while the roofs were covered with tiles that reflected the light in thousand shades. The grounds were beautified by deep  translucent ponds, with blue lotuses intermingled with Kanaka flowers of deep red colour. The place was shaded by mango groves".

"The proceedings of the assembly began on the 21st day of the month of Vaishakh (late April-early May) with a grand procession in which more than a hundred thousand people took part. The procession began at early dawn from the palace of the Emperor. It was led by a contingent of 500 war elephants clad in armour. This was followed by the royal elephant, carrying the golden statue of Buddha at the center. Emperor Harshavardhan sat on the right with a white flywhisk in his hand, whereas King Bhaskarvarman sat on the left of the statue with a white parasol in his hand. Both the kings wore on their head, golden tiaras designed to look like flower wreaths and jeweled ribbons. The Royal elephant was followed by two elephants loaded with flowers. As the procession continued, flowers were scattered on the image of Buddha from these two elephants. Another elephant, carrying our monk and ministers of the Emperor, followed the flower carrying elephants. This elephant was followed by 300 elephants walking in double file, on each side of the procession course, carrying the princes, great ministers, and chief priests of the different countries. This was followed by another contingent of elephants carrying musicians, who played the instruments". 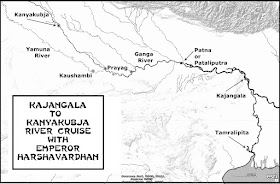 "Our monk was buried in the Western capital, but in the year 669 CE his remains were removed by order of the Emperor to a space situated to the north of the valley of Fan-chuan, where a tower was constructed to his memory. Our story too, finally ends here. We feel however, that we should end it with the description of the Nalanda University, so much loved by our monk.

We feel that this must have been the scene before his eyes, as he slowly sank and was gone.

“An azure pool winds around the monasteries, adorned with the full-blown cups of the blue lotus; the dazzling red flowers of the lovely Kanaka hang here and there, and outside groves of mango trees offer the inhabitants their dense and protective shade”.

At the end of each and every chapter, you would find a complete list of all the references that I have referred to. The references also include notes for additional information and original Sanskrit texts, wherever available. A typical page mentioning references shown below. 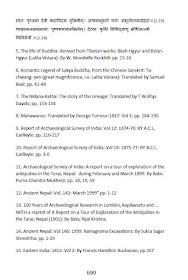 Index of Chinese names for places and persons

At the end of volume III, in Appendix I, you would find complete page index of Chinese names for places and persons as mentioned by Xuan Zang in his travelogue. The Chinese names have been Romanized according to Hanyu Pin-yin system, now universally accepted. A page from this index is illustrated below. 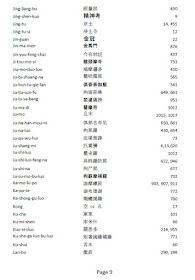 At the end of Volume III, you will find and all-inclusive Genaral Index for all three volumes. A page from this index is illustrated below. 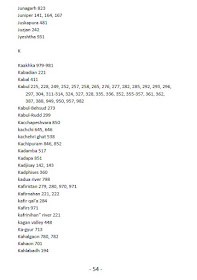