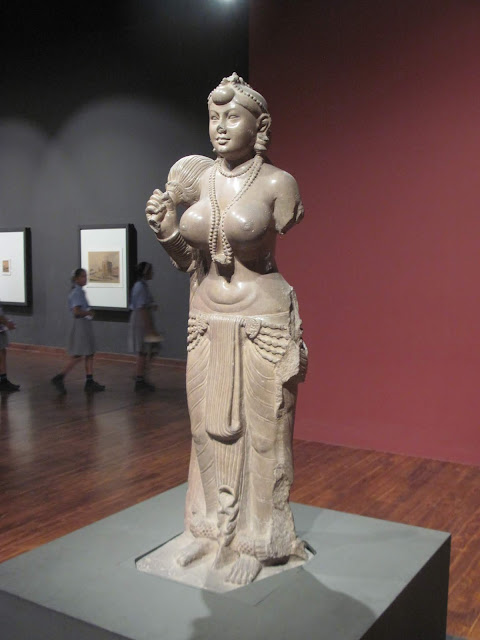 I think it to be a good omen, as our flight to Patna is announced almost on the dot. Pune airport has only two aerobridges, so most of the times; boarding or alighting from the aircraft is by a ladder; after or before a brief walk to or from the aircraft; in the cold, hot sun or even rain. We are lucky as we board the aircraft through an aerobridge and manage to avoid the walk in the hot sun. Routine announcements follow and the aircraft leaves the aerobridge almost immediately. We roll down the tarmac and start moving towards the runway by the separate taxiway built for aircraft movements. About half way to engine revving up point on the runway, aircraft suddenly stops.  Our pilot tells us that he has been asked to wait, as there are a few military flights before us. We wait patiently. After another 10 or 15 minutes, aircraft starts moving slowly again to stop somewhere near, where the taxiway joins the runway. Through the left window, we can see number of SU 30 fighters parked. They are so near us that we can even see the pilot and co-pilot sitting on their seats under the canopy. Shortly before he takes off, the pilot of the nearest parked SU-30 aircraft, waves to us. We wait for another 10 or 15 minutes, before we are allowed to take off by the control tower. Finally, we take off and are airborne.
The flight is comfortable but service is too slow. It is ages before we get our meals. As I doze off after the meals, announcement comes that we shall be landing shortly at “Jaiprakash Narayan international airport” in Patna. We land exactly at 4 PM. The weather outside is warm but not very hot. Patna airport, even now, is exactly like many other airports in India, as they were 20 or 30 years back. Most of the airports in India have been rebuilt or undergone renovations during last decade or so, but not the Patna airport. Even today, there is only one baggage belt in domestic arrivals. We get our bags rather quickly and come out of the airport. I search for the placard with my name, which our driver for next week, Ravi, was supposed to hold for us. At the first glance, I do not see him, so I decide to call him. He responds immediately and tells me, where he is standing. He takes our bags and we move slowly to a point, where he asks us to wait, as he would drive his car to that point to pick us up. The car comes in and we sit in it. Shortly, we are dropped at “Pataliputra Continental” hotel, which is barely 10 minutes’ drive away. The hotel and specially our room, both are rather pleasant; however, occupancy at the hotel appears to be rather low. Our tour operator Jackie calls to fix up tomorrow’s travel plans. For now, there is nothing else to do, but relax in the comforts provided by the hotel. 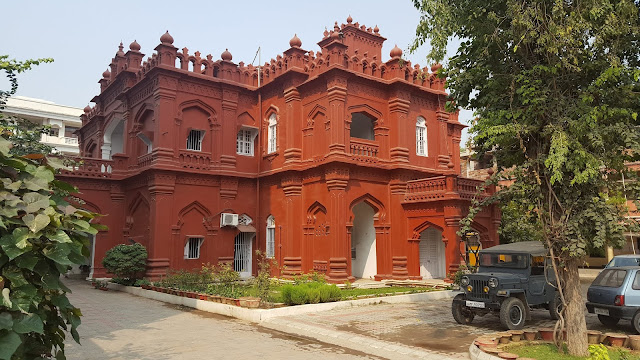 We get ready by 10 AM. Ravi, our driver, has already arrived. We check out of the hotel. As we come out, our attention is caught by two beautiful quaint buildings: constructed in the ornamental Mughal or Rajput building style of the medieval period; complete with grills, arches, decorative doors, and windows. Both buildings are well maintained; one painted in ochre red and other in light blue colour.  Enquiry with hotel people tells us that it is an Engineering College now called as “Maulana Azad Engineering College” but belonged to a former Maharaja. A few snaps, and later we head for the car. Our first destination today is “The Bihar Museum”
.
The oldest museum in Patna was established in 1917 during British Raj. It was always considered as Patna’s showcase. The museum displayed archaeological objects, coins, art objects, paintings, instruments, textiles, bronze images, sculptures, and terracotta images by Hindu and Buddhist artists. It also houses, even today, a casket — said to contain the sacred ashes (relics) of Gautama Buddha: unearthed in 1958 by archaeologist, A. S. Altekar, at the Relic Stupa of Vaishali.
A project was started in 2009 by the state Government, to build a replacement museum in Patna to enable the display of larger collections. This museum, known as Bihar museum, was finally inaugurated in October 2017. The artifacts from ancient India to year 1764 are now kept in Bihar Museum and those of the post-1764 period are kept at Patna Museum. Our tight schedule for the day means that we can visit only one museum. We opt for the Bihar Museum, simply because it houses the ancient artifacts, in which we are more interested. 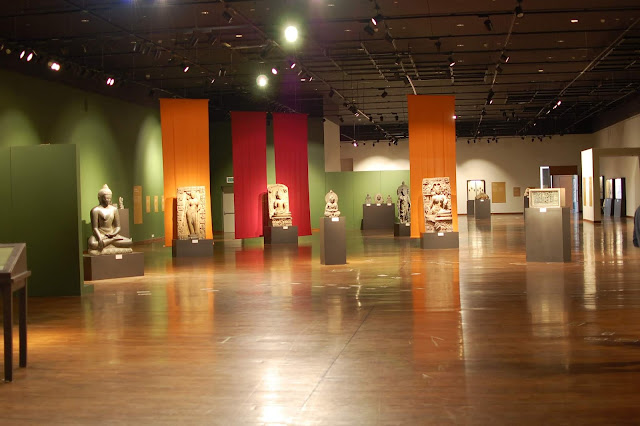 
The spanking new Bihar Museum is huge. It has an area of 25000 square meters. As we approach the gate, a guard tells us to get inside the campus from a gate on other side, to the car parking area. From there, it is a long walk to the museum entrance. After usual formalities, we get in. A huge map catches our attention. With our tight schedule for the day, we know that we can spare just about two hours for the museum. We therefore decide to visit Historical galleries only. All the Galleries are air-conditioned and have quite high ceiling height, creating a pleasant environment to visit the musum.  History Gallery follows a chronological order as prehistory, protohistory, early Bihar, the rise of Magadha Empire and successive dynasties. The collection however is not from Bihar only. There are artifacts from the Sindhu & Sarswati Civilization, Gandhar and Swat regions of present day Pakistan-Afghanistan. The gallery also has objects from the 4th century BCE to the 1st century BCE. It has objects spanning three major dynasties of India; the Mauryas, the Nandas and the Shishunagas.
Artifacts in Gallery A are arranged very aesthetically and whole arrangement is very eye pleasing. Special mention can be made of a few bas-reliefs done in Gandhar style and a lion’s head pillar capital. As I approach the last few sculptures kept towards the end of Gallery A, the lights suddenly go off, coming back after a few seconds. There is supposed to be a backup arrangement in the museum as Bihar is known to be notorious for sudden disappearance of electric power. We are in Patna for less that twenty-four hours and have our first test of the power failure. From this time onwards, until we leave the museum premises, power outages, which last from few seconds to tens of minutes, just keep happening. Luckily, for us, there is no power failures in the galleries located on first floor and we can visit them without hindrance. 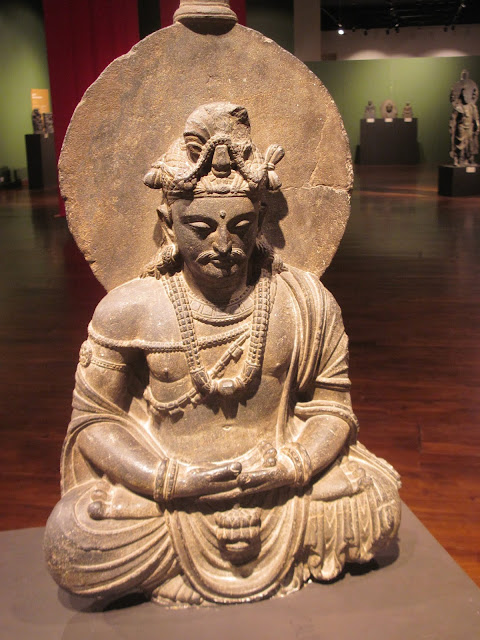 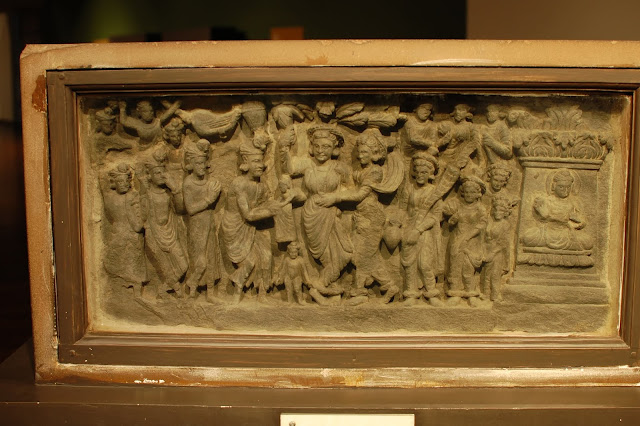 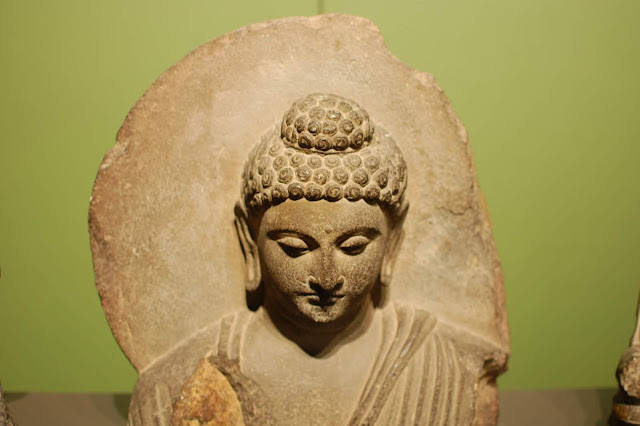 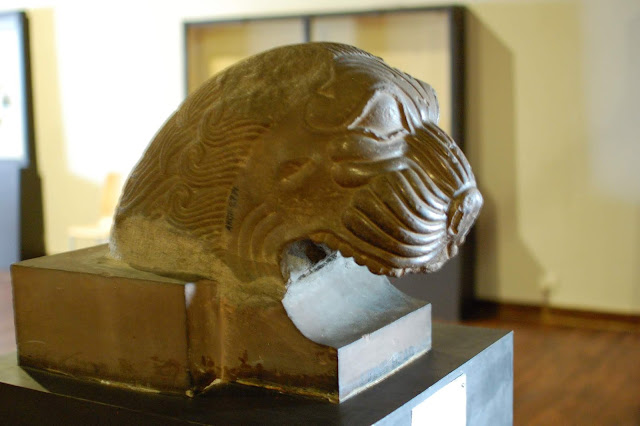 Head of a Lion  (Pillar Capital)

We come out of Gallery A. The passage leads to a staircase. In the open space or foyer, adjacent to flight of stairs, a grand three-dimensional mural has been created. The mural, named as “Silent Sermon”, shows a huge Buddhist begging bowl at center with hundreds of miniature Buddhist monks rushing around it. The large foyer, light and shadow patterns created by the tall rectangular pillars forming the wall between the foyer and the courtyard outside and the mural, all create a magical effect. I sit down on one of the benches provided and enjoy the effect. 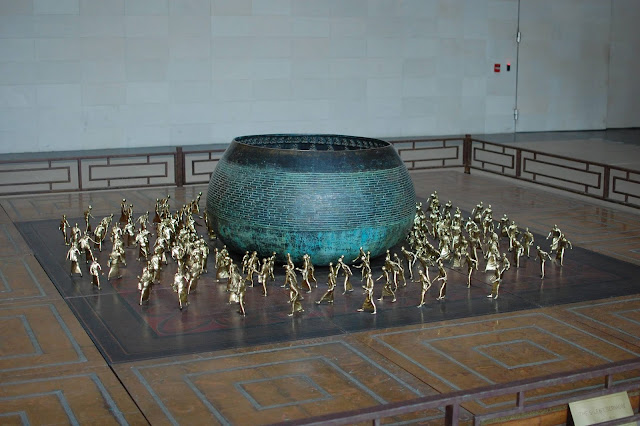 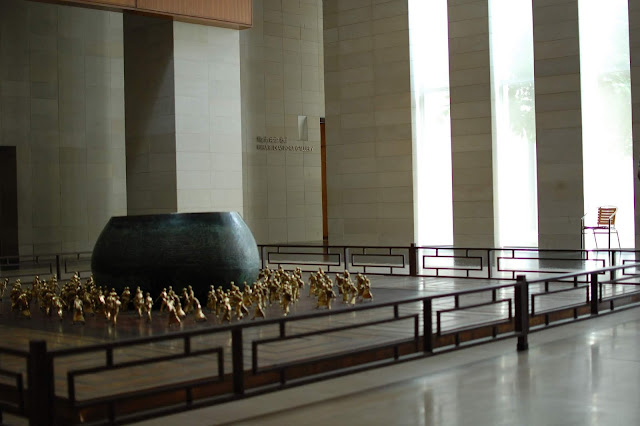 Light and shadows in the foyer
Museum also has a cafeteria. Since there is no power in the gallery, we decide to have a cup of coffee. As we finish our coffee, the lights return and we decide to climb up the stairs. Gallery B any way is closed, and Gallery C does not have any exhibits of our interest. So we move on to Historical Arts Gallery, where prime attraction of the Bihar museum, “Didarganj Yakshi” is displayed.
“Didarganj Yakshi” is considered a unique and outstanding example of Indian art. The sculpture,
displayed at the center of gallery, is 5 feet 4 inches (162.56 cm) tall and is carved out of a single piece of sandstone. The life-size standing image is of a tall, well-proportioned, freestanding female with well-polished surface, a characteristic usually associated with Mauryan polish. The Flywhisk (chauri) is held in the right hand whereas the left hand is broken. The lower garment creates a somewhat transparent effect.

According to the legend displayed in the museum, “The Didarganj Yakshi was made 2000 to 2300 years ago, possibly during emperor Ashoka’s reign. Carved out of a single piece of buff coloured sandstone, this highly polished life size sculpture was discovered in 1917 near the banks of the Ganga at Didarganj, near Patna. She was found submerged in riverbank mud, where the underside of her base was supposedly been used by villagers, when washing clothes. Pursuing a snake that crawled under the base, a man named as Maulavi Ghulam Rasul discovered the piece. The Yakshi meets the standards of beauty and proportion in Sanskrit and Pali treatises. Her face is beautifully sculpted, her skin folds delicately at the neck and the waist and she is heavily adorned. She wears a flywhisk over her right shoulder.The Yakshi has represented Indian art in international exhibitions. She remains the most beautiful and important piece in our (Bihar museum) collection”. 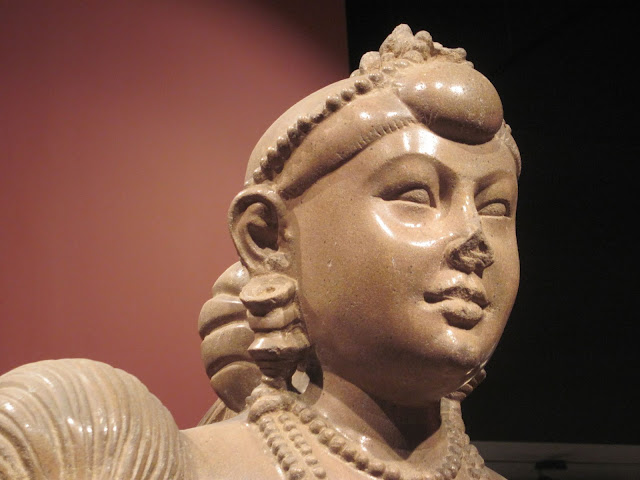 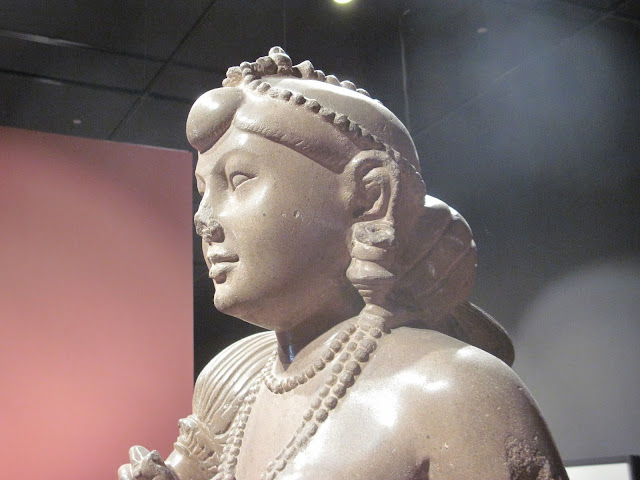 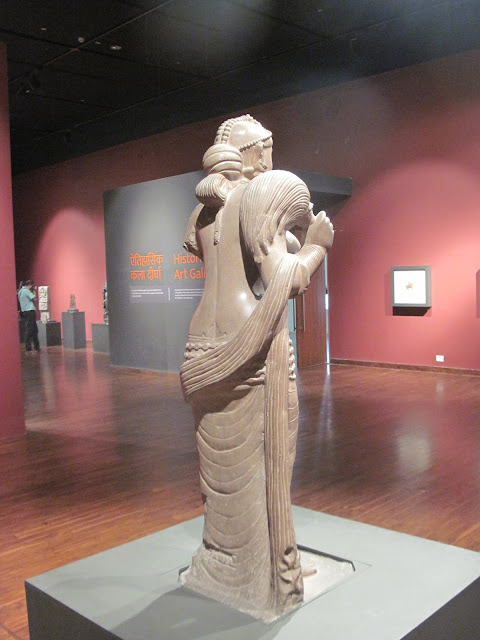 There are other noteworthy artifacts in this gallery. Just to name a few, a gargoyle and a bas-relief of a lady with a parrot can be mentioned along with miniature terracotta artifacts. 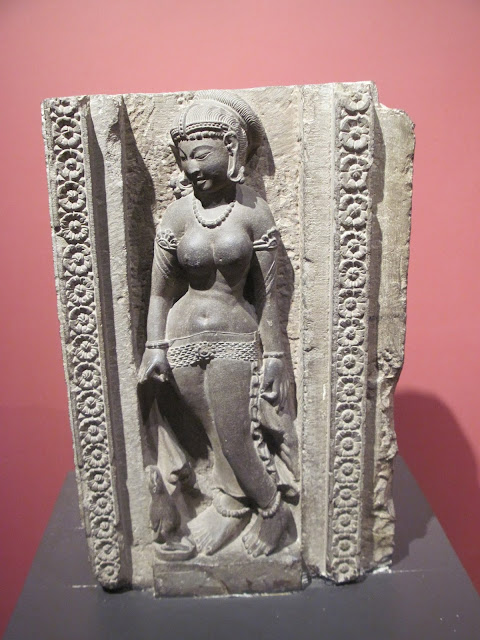 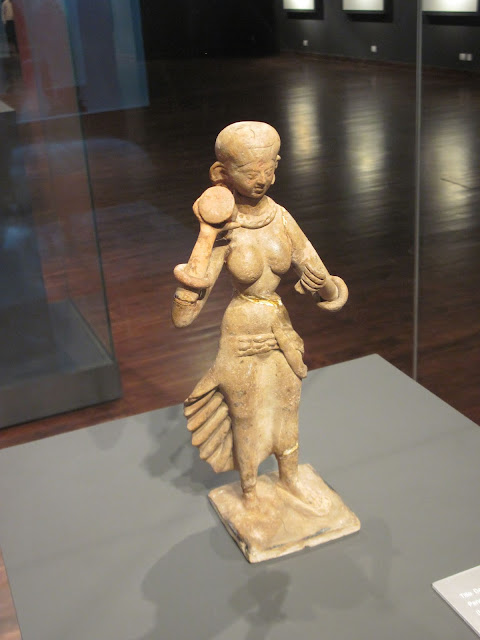 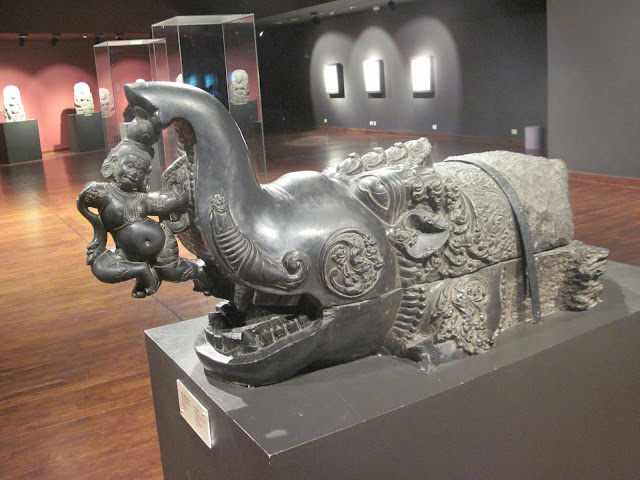 After our visit to the museum, we decide to have lunch. Our driver takes us to a place called “Ghar Angana”. A place gaudily decorated with Rajasthani décor. The food is tasty but oily. After the food, we immediately leave for Bodhgaya.  The distance between Patna and Bodhgaya is about 125 Kilometers. The road however is mostly just a two lane highway and that too not in a very good condition.   We cross two major towns on our way; Jahanabad and Gaya. Both towns are congested, shabby, dirty and highly populated. In these towns, roads are very narrow and again congested. Only after we cross Gaya and enter Bodhgaya cantonment, the road widens. After four long hours, since we left Patna, we reach our hotel, “Anand International” in Bodhgaya. At the first appearance, Bodhgaya looks to be a spread out town with many open places. Our tour operator Jackie meets us at the entrance.  After the pleasantries, we discuss tomorrow’s plans. Jackie wants us to be ready by 6:30 AM, as there is less rush at Mahabodhi temple early in morning. The hotel is nice and comfortable but occupancy again is very low. Later, when we have dinner, we find that we are the only occupants, who have checked in for that night.  I hit the bed rather early, as it has been a long day.