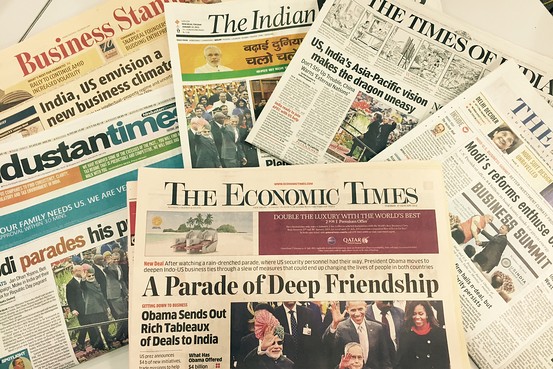 A senior friend of mine, who was a senior journalist of a well-known newspaper, often used to comment about news reporting. He would say that if a dog bites a man, it is not a news item. However, if a man bites a dog it is headline news. In today’s context, I find this observation by my friend nothing but truth. An event becomes news worthy if there is an element of unexpectedness. Higher the factor of unexpectedness, higher is the news value of an event. Take example of a sports event. Any unexpected result is always highly noteworthy.

It appears to me that today’s news media have simply forgotten this rule. According to them, report of anything happening can turn into a news report if it can be twisted or turned to produce a depressing “feel bad” factor. In fact, this thought has become so prevalent that any news event that does not produce a depressing “feel bad” factor is not newsworthy at all. Sometimes however, their attempts to put everything into a negative light can misfire badly and produce result, where a reader might start wondering about authenticity of that news media itself.

Yesterday, there was a statement made by India’s finance minister that compared to situation an year back, the “Non-performing Assets” or NPA   of India’s public sector banks have decreased, definitely a piece of good news. According to my understanding, when finance minister of a country makes a statement, it is the official word  from Government. There are no doubts about it whatsoever. It certainly is not a claim, which may prove true or otherwise. However, our news media have called or named the statement as a claim, injecting in air of uncertainty, which would mean that the claim might be true or is most probably false.

What is hilarious however, is the actual description. The news item calls this reduction in NPA, a slide in NPA. A slide always has a negative tone. The stock markets or commodity prices may slide, Rupee may slide against US Dollar. I have never heard of Non-Performing Assets, which are in reality debts that banks are unable to recover, slide. It is clear that in proving his utmost commitment to give black negative colour to each and every news item; our news reporter has goofed here.
A particular Indian news media is often found indulging in this kind of negative reporting. The problem is that we, the ordinary people, who suffer these daily injections of negativism from this media, can do nothing about it. I have a feeling that the time has come to start boycotting this newsgroup.