Searching for the original ‘Brihat-katha’ 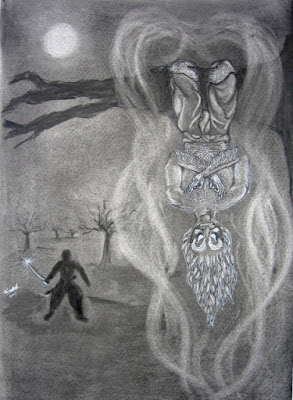 Most of the Indian readers of my blog must have read, when they were young, the famous collection of stories known as ‘Vetala Panchavimshati’ (वेतालपञ्चविंशति) either in a book form or in pictorial or comic format. For sake of other readers, I would like to give here the frame of the story, which goes along on these lines. The legendary king ‘Vikramditya’ makes a promise to a sorcerer that he will capture a ‘vetala’ (वेताल), (a celestial spirit Pishacha [analogous to a vampire in Western literature] that hangs upside-down from a tree, inhabits, and animates dead bodies). King however finds the task much more difficult than he had ever imagined. Each time the king tries to capture the ‘Vetala’, it tells a story that ends with a riddle. If the king cannot answer the question correctly, the vampire consents to remain in captivity. If the king knows the answer, but still keeps quiet, then his head shall burst into thousand pieces. Moreover, if King Vikramaditya answers the question correctly, the vampire would escape and return to his tree. Being extremely wise, the king knows the answer to every question; therefore, the cycle of catching and releasing the vampire continues for twenty-four times, giving us twenty-four amazing stories.

Readers may not know that ‘Vetala Panchavimshati’ stories come from a much larger collection (actually a vast collection) of stories, aptly called as ‘Story Ocean of many rivers’ (कथासरित्सागर), a name I am sure that all my Indian readers must have heard of. The work, consisting of 18 books of 124 chapters and approximately 22,000 Shlokas (each shloka consisting of two half-verses of 16 syllables each), is believed to have been composed by a Kashmiri Pandit, Somadeva. He was commissioned by a King of Kashmir, ‘Anantadeva’ (reigned 1028-1063 CE) of ‘Lohara’ dynasty, to compose a cycle of stories to amuse and calm the queen ‘Suryamati’ (सूर्यमति) during a political crisis. Though the basic story line of this book narrates, the exploits of King Naravahandatta (नरवाहनदत्त) of ‘Vatsa’ dynasty, who ruled from the ancient city of ‘Kaushambi’, located on bank of River Jamuna. Author Somadeva skillfully manages, during course of his book,  to interweave an unbelievably large number of short and long stories, which sometimes have no connection whatsoever  with the main story line. The Book begins with birth of King ‘Udayana’, narrates his life, loves and queens. Story then proceeds with birth of Udayana’s son ‘Narvavahandatta’, his upbringing and finally how he acquired his many (twenty-six) wives.

Somadeva, though a great story teller, to be fair enough, accepts in the beginning of his magnum opus that he is not the real author of this work and he has merely abridged it from the work of a great poet (who lived between first and third century) known as ‘Gunadhya’(गुणाढ्य). This original work was known as ‘Brihat katha’ (बृहत्कथा, a widely spread story). Somadeva says.

“Gunadhya for his part using the same Paisachi language threw the original tale of Kanabhuti consisting of seven stories into seven hundred thousand couplets in seven years; and that great poet, for fear that the Vidyadharas should steal his composition, wrote it with his own blood in the forest, not possessing ink.”

(Paishachi language was a form of ‘Prakrit’ language and is believed to have been popular in northwestern region of ancient India. The present Pakistani –Afghan languages of ‘Pushtu’ and ‘Dardistan’ people are believed influenced by ‘Paishachi’ language.)

However, it so happens, that Somadeva is not the only Kashmiri Pandit to compose such a work of ornate poetry based on Gunadhya’s ‘Brihat Katha’. Another Kashmiri Pandit, Kshemendra (क्षेमेन्द्र) had also composed about thirty years earlier (year 1037 CE), a poetic work known as ‘Btihatkathamanjari’ (बृहत्कथामञ्जरी). In all fairness, ‘Kshemendra’ also accepts, like Somadeva, that his work also is a recension of Gunadhya’s ‘Brihat Katha’. He says.

Even though these two above-mentioned works of ornate poetry, based on Gunadhya’s ‘Brihat-Katha’, have been always available to scholars including European Orientalists, the original ‘Brihat Katha’ written by Gunadhya remained untraceable. Surprisingly, as more and more scholarly interest was shown in Gunadhya’s  ‘Brihat-katha’ during Nineteenth and Twentieth centuries, more recensions of the original ‘Brihat katha’ came to light or became known, from study of ancient literatures. In 1906, S. Krishnaswami Aiyangar reported in Journal of Royal Asiatic society that a Tamil work of poetry known as ‘Udayanan Kadai’ or ‘Peruugadai’ was according to him a literal translation of  Gunadhya’s ‘Brihat-katha’. He felt that it was written around second century CE. In 1913, R. Narsimhachar reported in Journal of Royal Asiatic society, discovery of a copper plate inscription of a king of ‘Ganga’ (गान्गेय) dynasty, ‘Durvinita’ (दुर्विनित), who reigned in first half of sixth century. The inscription attributed the king with the authorship of three books. One of the books was called as “Vadda-kathena”, which Narsimhachar interprets as the Sanskrit translation of original ‘Brihat-katha’ in Paishachi language. Prof. F.Lacote, in his essay published in 1908, claimed that he knows about even a Persian version of ‘Brihat-katha’ that was stored at India Office Library in London. The book was titled as ‘Kutha and Purana’ and consisted of 34 stories, which unfortunately were not coherent. Readers might be aware that the stories from ‘Brihat-katha’ were found used in many famous Sanskrit poetic works and dramas, such as ‘Swapna-vasavadatta” (स्वप्न-वासवदत्ता), ‘Pratidnyayaugandharayan’ (प्रतिज्ञायौगंधरायण), ‘Ratnavali’ (रत्नावली), ’Harshacharita’ (हर्षचरित), and ‘Meghaduta’ (मेघदूत). 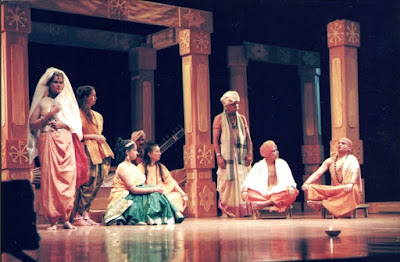 In 1893, Pandit Hara Prasad Shastri reported in Journal of the Asiatic society of Bengal,  about the discovery of twelve manuscripts that originated in Nepal and were obtained through the good offices of his friend Babu Kshirodchandra Raychaudhari, Headmaster of Chapra Zilla School in Bihar. I quote from his report as follows.

“The twelfth manuscript is labeled as unknown. The first page is missing and the end far away. On examination, it is found that pages from 2 to 210 exist. The handwriting is beautiful but much older. On examination, the manuscript proved to be a portion of the ‘Brihat-Katha’, about tenth of the whole work. It is not Somadeva’s ‘Katha saritsagara’ nor Kshemendra’s ‘Brihatkathamanjari’ because in both these works the chapters are divided into ‘lambhakas’ and ‘tarangas’, whereas in the present manuscript it is divided into ‘Adhyayas’ and ‘Sargas’. The manuscript contains one complete Adhyaya and a portion of second. It has in all 26 ‘sargas’. Some of the markers at the end of a page or Colophons bear significant words; ‘Brihatkatha- ShlokaSangraha’ (बृहत्कथा- श्लोकसंग्रह), Names of ‘sargas’ and some proper names also appear in some of the Colophons, which I have not been able to identify in Somadeva’s or Kshemendra’s works”.

Based on his observations, Pandit Hara Prasad Shastri came to the obvious conclusion that his manuscript must have been the third recensionof Gunadhya’s ‘Brihat-katha’, originally written in Paishachi language, and it bore a name ‘Brihatkatha- ShlokaSangraha’. He also noted from the archaic style of letters written in ‘Devnagari’ script that this manuscript was much older period (from Gupta period, Fourth to Sixth century) than those written by Somadeva and Kshemendra. He also pointed out that the manuscript was part of a large work with only the first Adhyaya  itself comprised of 4200 Shlokas or verses. In comparison, Kshemendra’s entire work consists of little more than 7000 Shlokas.

A famous French Orientalist, Prof. F. Lacote managed to collect three or four manuscripts of ‘Brihatkatha- ShlokaSangraha’. One of the first things that he noted was that colophon of ‘Sarga’ 28, gave name of the composer of this book by saying ‘Shribhatt Budhaswamin krit Brihatkatha-shlokasangraha ’ (श्रीभट्टबुधस्वामि कृत बृहत्कथा- श्लोकसंग्रह),  which could be translated as  ‘Brihatkatha, abridged in epic verses by Budhaswamin’. After a thorough study of all the manuscripts of ‘Brihatkatha-shlokasangraha’ collected by him, Prof. Lacote, thirteen years later (1906) wrote his famous essay, titled ‘Essai sur  Gunadhya et la Brhatkatha’. However, before we jump to the conclusions drawn by Prof. Lacote, let us examine another book of great relevance to the subject,  titled as,’ History of Indian literature’ by M. Winternitz,  written in 1922. Winternitz points out in this book and I quote.

“There are many points that go to suggest that ‘Brihatkatha- ShlokaSangraha’ stands closer to the work of Gunadhya than the Kashmiri recensions .” He gives two examples to support this argument. Firstly, the introductory verses about Gunadhya (quoted above) that are present in ‘Katha Saritsagar’ and ‘Brihatkathamanjari’ are completely missing in ‘Shlokasangraha’. Secondly, Budhaswamin’s book says in chapter 14, verse 60-61 that “Gunadhya could not sing in his own praise”; a sure indication that ’Shlokasangraha’ is a verbatim version of the original, in the form of a poem. Winternitz adds that the nature of the main story in ‘Shlokasangraha’ creates a stronger impression of the work being original than the Kashmiri recension.

Prof. Lacote, in his essay, comes to the same conclusion, when he guardedly says. “Budhaswamin may have innovated a little in the detail of the adventures, and much, if one likes to think so, in the style, is not unlikely, more essentially, in the necessary tales, which are of a nature more vague than the frame story itself. I do not believe that Budhaswamin has deliberately given to the ‘Brihat katha’ a commonplace, even a vulgar character, which did not exist already in the original. Everything considered, it does not seem to me as if he had altered considerably either the plan or subject matter (of Gunadhya’s Brihat-katha)”.

Considering the three recensions (two Kashmiri and one from Nepal) together, Prof. Lacote tries to reconstruct in his essay, the main frame of the story of Gunadhya’s  ‘Brihat-katha’ that he considers is nearest to the original. However, as readers must have realized by now, our purpose here was never the story itself, which readers can always read from the plethora of translations available in many languages. What is more fascinating is the account of the attempts made and efforts put in by many a scholars and Orientalists to try to retrieve the original ‘Brihat-katha’, a masterpiece of ancient Indian literature, even when the original manuscript has been lost forever.