A celestial marriage fancied in stone and words 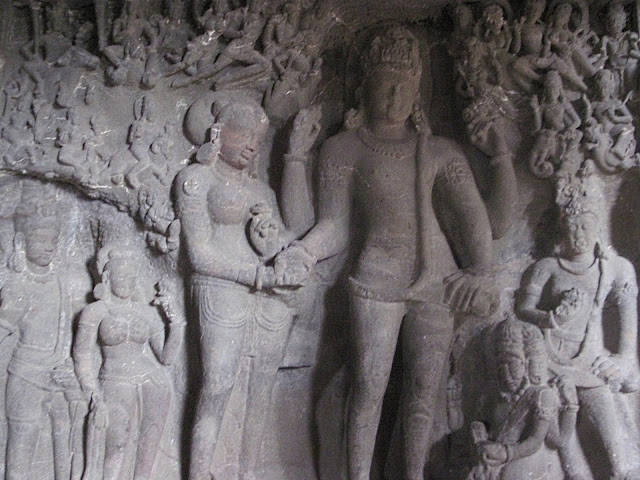 Hindu scriptures narrate tale of a demon known as ‘Tarakasura’, who was blessed by Gods that he would never be killed by anyone except son of Lord Shiva. This was almost an impossibility because Lord Shiva had killed the God of Love, ‘Madan’. Meanwhile, Uma, a daughter of Mountain Himalaya,  fell in love with Lord Shiva, who would not even look at her. To change his mind she carried out a long spiritual penance (तप), because of which Lord Shiva changed his mind and agreed to marry her. This marriage of Gods, which eventually took place according to this story, has been a great source of conjecture for poets and carvers in stone of ancient and medieval India.

We find scene of this celestial marriage, carried out according to Hindu Vedic traditions, depicted at least in two rock cut temples of in Maharashtra (Elephanta and Verul or Ellora). In cave no. 29 of Verul caves near Aurangabad city, this scene is depicted towards the east end of the great hall of this cave. The two main figures in the mosaic are Shiva and Parvati or Uma, each with a flower in their left hand. Uma wears heavy earrings and slightly inclines her head as if bashful. Below, to the right, kneeling by the sacrificial fire, is Brahma, with three heads, acting as priest; to the left are Mena and Himalaya, the mother and father of the bride, with a flower and a coconut. Above are the gods and goddesses; on the left are Vishnu, Yama, Vayu or Soma, Agni, and perhaps Varuna; on the right is Indra on Airavat.
Verul caves are believed excavated between seventh and eleventh century CE. We however cannot exactly pinpoint the century when this particular mosaic must have been sculptured.  Yet, since this mosaic is in cave 29, which is located towards north end of the caves, it must have been done in later periods as earliest caves in rock cut temples are always located towards the center. We can therefore place this cave (no. 29) as excavated in eighth or ninth centuries approximately.
At least three centuries before these stone carvers would  start their work with the chisel, a famous Sanskrit poet ‘Kalidasa’ had already conceived an epic poem, which he named as ‘Kumarsambhavam’ or ‘Birth of Kumara’, based on the theme of this celestial marriage. The ‘Kumrasaṃbhavam’ is widely regarded as one of Kalidasa’s finest works, a glowing example of his poetic genius. The style of description of this poem would set the standard for metaphors that pervaded the Indian literary tradition for many later centuries.
Kalidasa describes the marriage ceremony in these words.

The original Sanskrit poem was aptly translated by Ralph Griffith in 1853 in a beautiful free flowing manner. Here is the translation of the verses quoted above.

“Around the fire in solemn rite they trod,
The lovely lady and the glorious God;
Like day and starry midnight when they meet
In the broad plains at lofty Meru's feet
Thrice at the bidding of the priest they came
With swimming eyes around the holy flame
Then at his word the bride in order due
Into the blazing fire the parched grain threw,
And toward her face the scented smoke she drew,
Which softly wreathing o'er her fair cheek hung
And round her ears in flower-like beauty clung.
As o'er the incense the sweet lady stooped,
The ear of barley from her tresses drooped,
And rested on her cheek, beneath the eye
Still brightly beaming with the jetty dye
This flame be witness of your wedded life:”
Be just, thou husband, and be true, thou wife!
Such was the priestly blessing on the bride.
Eager she listened, as the earth when dried
By parching summer suns drinks deeply in
The first soft droppings when the rains begin.
Look, gentle Uma, cried her Lord, afar
Seest thou the brightness of yon polar star”

We can easily agree that the beauty of these words equally projects out of the stone carving at Verul, leaving us in a quandary as to which one is more beautiful, the mosaic or the poetry of Kalidasa?