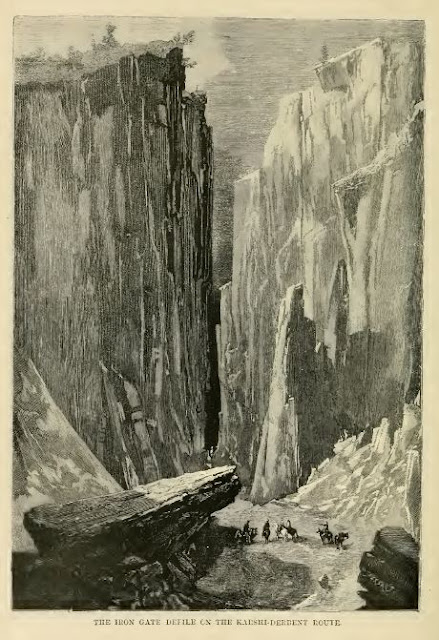 Searching on internet with a search engine has become a routine task these days. All of us use the search engine almost every day to find out about things we do not know or things that we know but do not remember precisely.  All of us have now become used to the exhaustive search results that these search engine spiders present to us that are interspersed with advertisements cleverly. Yet sometimes, the search spiders come up with an odd find of a gem that simply baffles you and makes you think, Hey! How did I never know that?

It happened with me a couple of days ago.  I was searching for an obscure place in south Uzbekistan; very near the Afghan border. This place was described in old books as a mountain pass and only two writers gave a detailed description of it. The first writer was the famed 7th century Chines traveler, Xuan Zhang, who calls it as Iron Gate and goes on to describe it as; “ The pass so called is bordered on the right and left by mountains. These mountains are of prodigious height. The road is narrow, which adds to difficulty and danger. On both sides there is a rocky wall of an iron colour. Here there are set up double wooden doors, strengthened with iron and furnished with many bells hung up. Because of the protection afforded to the pass by these doors, when closed, the name of Iron gates is given.”

The second description comes from the travelogue of one “ Ruy Gonzalez De Clavijo,” who was ambassador of Henry III. of Castile, to the court of Timur in 1404. He describes this pass as ;” This hill is very high and there is a pass leading up by a ravine, which looks as if it has been artificially cut, and the hills rise to a great height on either side, and the pass is smooth and very deep. In the center of the pass there is a village, and the mountain rises to a great height behind. This pass is called the great gates of iron.”

Among the hundreds of links thrown up by the search engine on my computer screen, there was one link of a book that looked most uninteresting because of its old fashioned long name; “The universal geography: the earth and its inhabitants; edited by E.G. Ravenstein and A.H. Keane.” Since I was not able to find any further details from any of the other web sites, I thought of downloading the book and did it. When I opened the book, I found that the author of the book was actually someone else. It was written by a person known as Elisee Reclus.

This book surprisingly not only gave full details of the place, but had also included a line sketch of the place. It described the pass as;” One of the southern branches of the Kashka rises in a highland district formerly famous for containing one of the " wonders of the world. This is a defile 40 to 65 feet broad, and nearly 2 miles long, traversed by the route leading from Balkh to Samarkand by the Shirabad River, Shehi'-i-sebs, and the Samarkand tau range. When visited by the pilgrim Hwen-T'sang this defile was closed by folding gates, strengthened with bolts and adorned with belfries. Eight centuries afterwards Clavijo, Spanish envoy to the court of Tamerlane, also passed through the "Iron Gate," but the artificial structure had disappeared, and the place is now called Buzgola-khana, or the "Goat Hut." But the nearest town retains the significant name of Derbent," 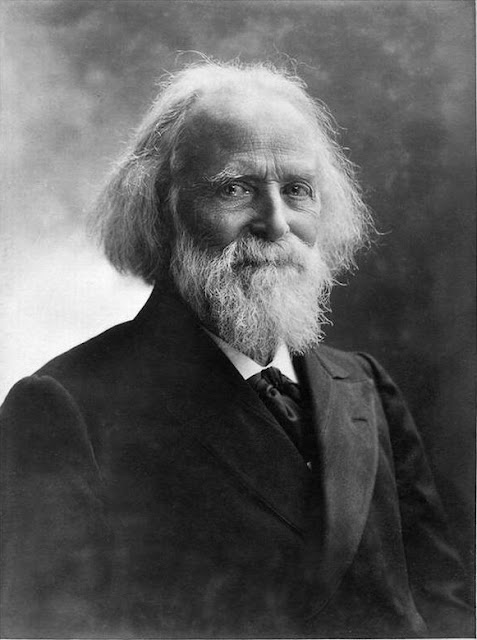 I really got interested in this book and its author, after finding detailed information about such an obscure spot, in it. To my utmost surprise, the book turned out to be a giant; by any standards. “The universal geography: the earth and its inhabitants” is a masterwork that has been published in 19 volumes, originally in French. Each volume is dedicated to a different part of the world. The author,  Élisée Reclus or Jacques Élisée Reclus (15 March 1830 – 4 July 1905) was a renowned French geographer, writer and anarchist. He produced this 19-volume masterwork, originally titled as “La Nouvelle Géographie universelle, la terre et les hommes” over a period of nearly 20 years (1875–1894.)

Reclus was born in the French town of Sainte-Foy-la-Grande, as a second son of a of a Protestant pastor and his wife. The couple had fourteen children, quite a few of which achieved renown as men of letters, politicians or members of learned professions. His two brothers Onésime and Élie Reclus, actually also became like him geographers. Reclus began his education in Rhine province of nearby Prussia and later continued it at Protestant college of Montauban in southern France.  He completed his studies with an exhaustive course in geography under famous German geographer, Karl Ritter (1779 – 1859), considered as one of the founders of modern geography at University of Berlin.
A major political upheaval tormented France in December 1951, when the then president, Louis Bonaparte proclaimed himself the Emperor Napoleon III. Fed up with the developments, Reclus left France and spent next six years travelling and working in Great Britain and United states. He settled down as a tutor in 1853 at a plantation, about 50 miles upriver from New Orleans in Louisiana. He published two books,’ impressions of antebellum New Orleans’ and ‘Fragment d'un voyage á Louisiane,’ in 1855. 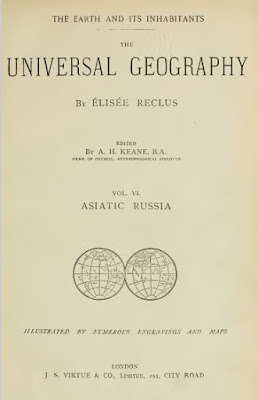 He returned to Paris and was attracted to the anarchist movement. He was arrested in 1871 for anti-national activities and sentenced to deportation for life. Because of intervention by supporters from England, the sentence was commuted in January 1872 to perpetual banishment from France.
Reclus settled in Clarens, Switzerland, where he wrote his masterwork ‘La Nouvelle Géographie universelle, la terre et les hommes.’ An English edition also was published simultaneously, also in 19 volumes, the first four by E. G. Ravenstein, the rest by A. H. Keane. This masterwork examined every continent and country on earth in terms of the effects that geographic features like rivers and mountains had on human populations. Reclus’ books were profusely illustrated with maps, plans, and engravings.

For their extreme accuracy and brilliant exposition, which gave them permanent literary and scientific value, Reclus’ writings were awarded the gold medal of the Paris Geographical Society in 1892. He was also awarded the 1894 Patron's Gold Medal of the Royal Geographical Society in London.Reclus was appointed chair of comparative geography at the University of Brussels, in 1894, and moved with his family to Belgium, where he stayed till his death in 1905. An independent scholar and author, Kirkpatrick Sale has this to say about Reclus’s writing.” His geographical work, thoroughly researched and unflinchingly scientific, laid out a picture of human-nature interaction that we today would call bioregionalism. It showed, with more detail than anyone but a dedicated geographer could possibly absorb, how the ecology of a place determined the kinds of lives and livelihoods its denizens would have and thus how people could properly live in self-regarding and self-determined bioregions without the interference of large and centralized governments that always try to homogenize diverse geographical areas.”

Fortunately for us, most of the volumes of “The universal geography: the earth and its inhabitants” are available on net and can be downloaded. It may be worthwhile to download them and keep them in our library.