My ventures in scare land 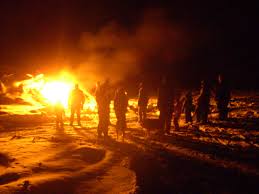 During my young days, something that scared me most was a fire. It had to something with a memory that is permanently etched in my mind. On one of those days, when I had come home from school, I had found everyone in the house collected in the backyard and looking towards something far ahead. I could see nothing because of a thick tall hedge that was planted along the fence of our house. All I saw was heavy black smoke that had ballooned in the sky like a giant black ball. I begged everyone to lift me up and show me what was happening. No one really complied with my request as they were too much engrossed in watching something that was happening. Finally, my father, taking pity on me, lifted me in his strong arms and I still vividly remember what I saw, even when so many decades have passed since.

Our house was situated at the far end of a stretch of a wilderness area that mostly consisted of low earthen mounds interspersed with low rocky outcrops and quite a few thorny “Babhul” or Gum Arabic bushes scattered around. At the other end of the wilderness, began the low rocky foot hills of Western Ghat Mountains. As I recollect, some people connected with milk business had established a huge cowshed or a barn that was popularly known as "Gavaliwada,"  near the base of the foothills with scores of bovines tied inside to wooden poles firmly fixed in the ground. I remember my mother complaining to my father before this incident happened, about the foul smell of cow dung hanging in air all the time. The entire barn structure was supported by wooden poles with woven bamboo mats as substitute for walls and thatched roofs. Apparently, some shepherds also stayed there alongside, though in separate huts of similar construction. On that fateful day, this entire cowshed complex was lit in bright red orange flames that seemed to touch the skies. So vast was the fire, that I watched it spell bound, before my father put me down again. Readers may not believe but the fire created such a scare in my young mind then that for months later, I would see the flames in my dreams and would wake up crying.

Being near such wilderness area and also in the vicinity of an irrigation canal, our house was often visited, by a few uninvited guests of a creepy kind. On many a days, I would see the wavy tracks left by some giant slithery visitor left in the soft clay in our yard. At least four or five times every year, these guys would cross their limits and would be found taking refuge under the moist soil in the area where a few banana trees used to thrive on wastewater in our backyard or amongst stone piles created for no specific purpose that would be lying around. My father usually shot them to pieces with his twelve bore gun. I was always scared of these guys then, but now I think that the main reason for my fear was my great grandmother, who would threaten and warn me about not going into back yard, where she used to grow vegetables; as if it was infested with snakes.

At a slightly older age, one of my uncles once took me against my mother’s wishes, to watch some horror film that had vampires in key roles. After watching the film; I was scared of vampires to the core. For long length of time afterwards, I sincerely believed that I would come across one of them with arms spread across with a scarlet robe hanging from them and glistening silvery fangs projecting out from its villainous mouth. I even dreamed of these characters sometimes.

I am aware that readers may ask me as to why am I recollecting and describing these childhood scares, when they are so much out of place and now  irrelevant. Living in the middle of the city, I must be now free from all such scares. Dear readers, nothing can be far from truth. To be frank, I am as scared even now, as I was then. My ventures in scare lands continue as before;  only the causes or reasons  have changed.

My biggest scare today is the traffic around my house. It so happens that just outside my house, there are traffic controlling lights that keep on their green-amber-red cycles throughout the day. This in theory should be a pleasing proposition, because it is supposed to bring orderliness around. But it does not, believe me! Adventurous riders and drivers of Pune consider it below their dignity or pride to obey such silly orders that too are given by a mere machine in form of blinking of some idiot coloured lights. Come red or green, they simply march ahead. Another peculiar feature of these young explorers is that whenever they realize that they need to slow down to avoid a crash with the vehicle ahead, they vent out their anger on their vehicle horn. Sitting in the house, these horn sounds give me a feeling all the time.  that I am watching a Z grade movie with an equally horrendous sound track.  Yet all this would pale in comparison, when I am actually on the road, driving my car. Usually I get dry lips and sore throat, the moment I take my car outside my compound. Like the molecular motion discovered by Einstein, modern two wheeled molecules whirr and breeze past my car from all directions; from front, back and sides of the car. I have since given up my silly old age notions like being on wrong side of a road, giving proper driving signals or not cutting corners while turning etc. etc.

Mu second big scare these days is the crowd on the streets. You can go anywhere, streets, shops, restaurants, cinema halls, book-stores; the places are always filled with people. I often wonder, whether it would be good thing not to allow people out on the streets after mid-night, like they used to do a few centuries ago. People drive at midnight like crazy, shop and eat at well past midnight. I feel terribly irritated, when I am woken up at 3 AM by loud talking and laughing of crowds merrily walking on streets, as if it is day time. I often wonder why these people do not find 12 hours of a day enough for their activities and leave night time alone, for people, who want to get some sleep.

There are some minor scares too. One is about eating out. There are so many eating joints, snack bars and restaurants near about my house that I have lost the count. They all however follow one standard, of dishing out tasteless, oily stuff that is given some high sounding French or Italian or at least Yanki name.  Even for Indian dishes, the basic brew is always found to be the same, only the additives like meat, chicken or eggs are changed. The restaurants also seem to have a wrong notion that all over India, only Punjabi food is loved and eaten. I have become so much averse to eating out these days that I try and avoid it as far as possible.

Every morning I go for a walk. Just round the corner, there is an area on the side of the road (that includes portion of foot path too) used for storing garbage heaps for onward distribution. Every morning, I see mini mountains of the collected garbage. It so happens that we have there, a very efficient supervisor, who manages to get the place devoid of any garbage efficiently managing the staff.  Last year, there was some problem with onward garbage disposals, with the result that mini mountains of garbage that I see every day, had changed to midi-mountains extending their bases to road proper. I am really scared these days about the garbage and often wonder, what would happen, if the super-efficient garbage disposal staff is unable to do their work of moving the Garbage Mountains. I shudder even to think about what may befall on us then.

I can go on and on, but would rather restrict myself to my main tormentors of today in this tour of scare land.  Readers must have realized by now that I have always been a much scared person; as a child or as an adult. Only the villains keep changing all the time. There is no escape really.