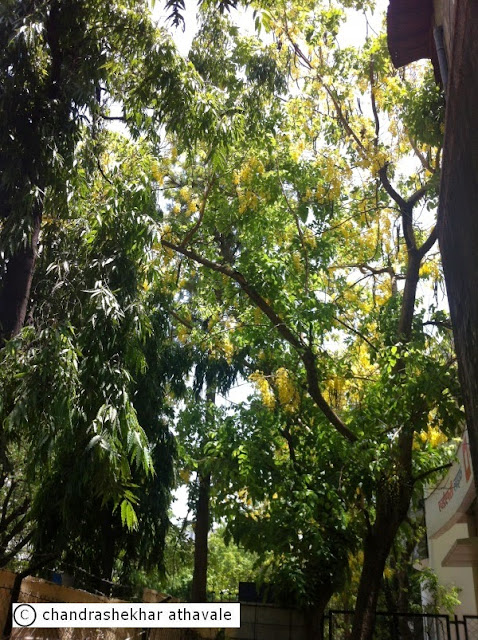 Finally, the summer is here in my hometown Pune. We had a mild, almost pleasant, April this year with noon temperatures hovering around mid thirties and cooler nights with temperatures actually dropping to fifteen or seventeen degrees Celsius. Everyone was deceived by the April weather into thinking that we might even have a mild or a temperate summer this year.

Off course, nothing of the sort happened and as May arrived, within a span of four or five days, we were in the baking or roasting heat, produced by consistent noon time temperatures well above forties. The hot weather immediately has an effect on the enthusiasm and zeal and one starts feeling run down with a feeling that his energy is being slowly sapped out. The afternoon turns the outdoors to a vast or giant oven and one feels the necessity of a nap so overwhelming, that a very few can avoid the temptation of overcoming it. Most of the working population can not indulge in such a luxury and have to work or travel in the sweltering heat. There always are a few lucky ones, such as IT guys, who have air conditioned offices and are not affected during work time. But when the working day is over and they are on their way home, the heat nevertheless grips them and takes its revenge. Summertime is probably the most hated season of the year in India. One of my now departed friend, used to count every morning, how many days of the summer are left, and would feel increasingly happier each day, because the number of remaining days of summer would be dwindling on every day. Those who are not familiar with Indian summers, are likely to ask a question as to how my friend would know, when the summer is going to end, so that he can count number of days left?

That is the beauty of Indian summertime. We know precisely, when it is going to end. A geographer may define summertime as a period between June to September each other. However on Deccan plateau in India, the summer starts much earlier; sometime in late March, but always ends by 7th June, when the monsoon winds arrive. The rains may come or might get delayed, but the winds arrive , declaring the end of the summer.

Indians may be hating summertime, but for many people around the world, it is the best season of the year. It is no wonder that summertime takes the enthusiasm of the people living in north America and western Europe to peak. They plan excursions to beach, have open air concerts and so on. In India, if any one has to arrange a concert in summer, it can be organized in the nights only. Day time is simply out of question.

People in India may hate the weather in May, but for nature, it is still the springtime. The best time of the year, with hundreds of flowering trees in full bloom. When I was young, a famous Marathi writer and anthropologist, Dr. Iravati Karve used to stay just across the road. She had planted a great many flowering trees along the road side including Acacia, Jacaranda, Laburnum, Spathodia and the Gul Mohor (Delonix regia .) They all would bloom to full glory in summertime with pinkish white flowers of Acasia, bright yellow of Laburnum, Jacaranda purples and bright red of Spathodia and the Gul Mohor creating a flowery rainbow. On many days, there world be high winds in the night, which would produce a beautiful carpet of flowers on the entire stretch of road below the trees. The trees are all gone now. I tried to retrieve the situation to some extent by planting some Laburnum and Gul Mohor trees. Today, only the Laburnums survive and still flower. (See the photo at the header.) To supplement this feast of colour, the “ Golden Champak” (Magnolia champaca) tree near my bed room would bloom at early dawn, with hundreds of flowers filling my bed room with a haunting smell. Even that tree is gone now.

In spite of the heat and the discomfort, I still love Indian summers. I feel that the European or North American summer is like Bollywood film music record, with music reaching the crescendo in minutes before it ends. Against this, Indian summer builds up slowly and when at crescendo, stays there for weeks. It is like a classical music performance spreading its magic over.

The best part of the Indian summer happens, when all of a sudden, dark clouds develop and appear from no where on a hot sultry afternoon. A torrential rain starts within minutes, taking away all the heat with it. The next few days are pleasant and then the heating up begins once again its slow torturous cycle.

To see the real glory of summer in my hometown Pune, one must visit the “Vetal” hills early in the morning. By this time of the year, most of the trees in the hill top forest would have shed there leaves leaving behind weird skeletons, which would appear almost ghostlike in early dawn. And then the fiery red ball of the Sun would rise behind these trees, creating an everlasting magical impression.

The summer in my hometown might be gone in another fortnight, only to return after an year. Gone with it also would be the heat and discomfort also. The monsoon rains would arrive, with their full fury and might, but also bringing up with them a new hope.