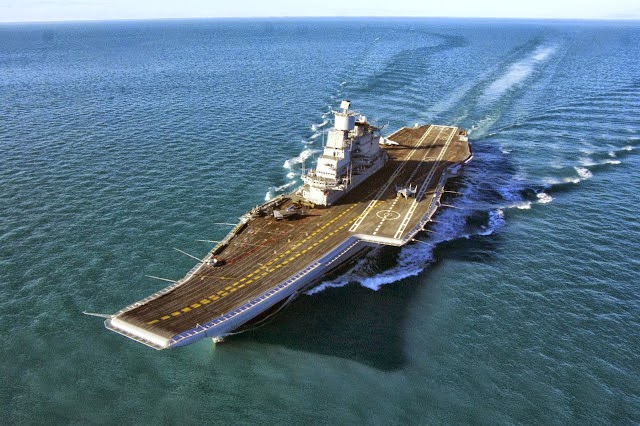 I had reported only last month that  Indian Navy was planning to launch indigenous construction of its largest-ever (65,000-tonne ) aircraft carrier code names IAC-II. The news has come true. This week, as India's Prime Minister was leaving on a state visit to China, India's Defence acquisitions council (DAC) cleared acquisition of huge tranche of military manufacturing projects that included  ultra-light howitzers, medium-transport aircraft, light utility helicopters and a few other things. The total value of projects cleared was a staggering amount of Rs. 250 Billions. An insignificant portion of this amount was allotted for a project, as "Seed money" or money for the commencement of preparatory work for construction of IAC-II,  which should eventually lead to construction of  India's largest-ever warship, the 65,000-tonne aircraft carrier INS Vishal.

What is more significant is that INS Vishal is likely to have nuclear propulsion for greater endurance as well as catapult assisted take-off but arrested recovery (CATOBAR)  configuration for launching fighters as well as heavier aircraft from its deck.

One of India's aircraft carriers,  “ Viraat,” would be decommissioned sometime in the middle of 2015. It was not a new ship, when it was commissioned into Indian Navy in 1987. The ship was built and actually commissioned in 1959 for the British Navy as HMS Hermes. The construction work had continued for fifteen years. She had then served as the flagship of the Royal Navy's task force during the Falkland Islands campaign in 1982.
With “Viraat's” exit, Navy will be left with just one aircraft carrier, INS Vikramaditya, which has became operational after a long wait, only on 7th May 2014. Indian navy would prefer to have at least two carriers, but may have to be satisfied with just one for time being or at least till 2019. 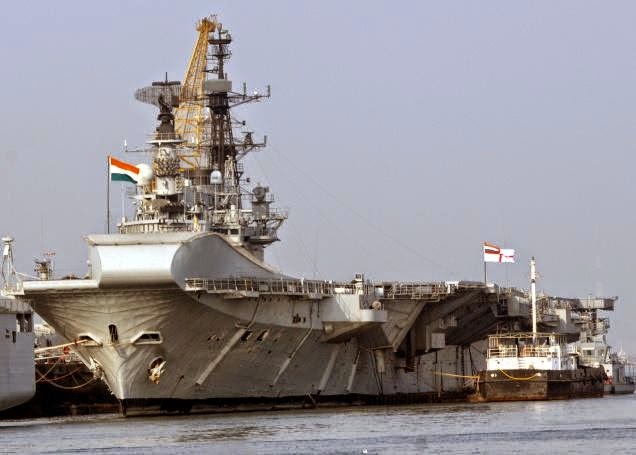 
Meanwhile, as I have reported in another post, People's daily of China in an article on 5th February 2015 has come up with a report on future of aircraft carriers in China and says;
“ Military expert Cao Weidong said that China pursues a defensive national defense policy and four aircraft carriers are appropriate. Aircraft carriers are typically required for training, maintenance and duty. If China has four aircraft carriers, with two in the South China Sea and two in northern China, they can better accomplish their missions.
The displacement of an aircraft carrier will greatly affect its combat capability. A 60,000 ton ship can carry from 30 to 40 fighters, while a 100,000 ton vessel can carry between 70 and 80 fighters. Carriers of 60,000 to 80,000 tons are appropriate for China's needs at present. China has no need to build 100,000 tonnes or larger carriers, like the United States.”
60,000 or 80,000 tonne ships are quite large ones. In comparison, India’s aircraft carrier, Vikramaditya has a displacement of around 40,000 tonnes. Building these ships is likely to be a tall order for Chinese shipyards. What is of more relevance now, are the news leaks pointing to China's plans for second aircraft carrier. A report in South China Morning post has quoted number of such news leaks. The report says;
“ A city government microblog and an official newspaper in Changzhou, Jiangsu province, separately mentioned on Saturday that a power cable manufacturer in the city had "won a tender for the second aircraft carrier". The sources cited a city government economic and information technology conference held on Friday.
In January last year, Liaoning party chief Wang Min reportedly told a provincial people's congress panel that the second carrier was being built in Dalian, home to the country's first carrier.
Under the headline, "Planes, High-speed Railway, Aircraft Carrier - all bear 'Made in Changzhou'", the Changzhou Evening News reported that the city government meeting highlighted the ambitious plans for the year of several top manufacturers, ranging from car makers, to producers of planes and naval vessels. It said Jiangsu Shangshang Cable Group had "won a tender for the second aircraft carrier" ”


As seen from India's experience in building aircraft carriers, it is really a tough project. China already is aware about this, because it has taken them 12 years to convert an incomplete hulk of a ship to an aircraft carrier, which is still not functional to its full capability. To build 3 aircraft carriers with 60000 to 80000 tonne capacity would be very challenging, to say the least and would take China a few decades for sure.China already has one aircraft carrier “Liaoning” and as per above report it is planning to build three more.
One shortcoming of all three carriers that India has or has planned, is that they all have angled ski-jumps for fighters to take off under their own power called as STOBAR (short take-off but arrested recovery) operations in Navy terms. This limits the carrier operations to only smaller fighters like MiG-29Ks. IAC- II is likely to have CATOBAR (catapult assisted take-off but arrested recovery) system for launching fighters as well as heavier aircraft from its deck. India is believed to have asked US to share this technology developed by General Atomics, under the bilateral Defence Trade and Technology Initiative, which these two countries have signed. With CATOBAR, IAC-II will also be able handle more as well as heavier aircraft for surveillance, early-warning, electronic warfare and other operations.
Carrier-battle-groups (CBG) are considered today the most versatile platforms of military power available. One such CBG can contrl around 200,000 square nautical miles of ocean area, and is capable of moving over 600 nautical miles a day. With China planning in all 4 CBG's, India is not left with any other choice but to start work on construction of this carrier as soon as possible.
16th May 2015
at 8:42 AM