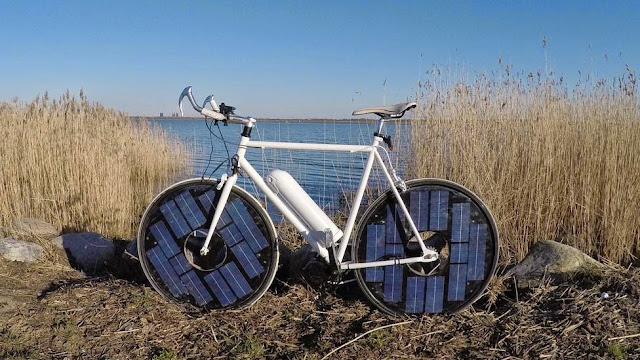 In the earlier parts of this series, we saw some real crazy bicycles like those made from cardboard, bamboo and hemp. In another part, we saw custom made bicycles from Singapore. The crazy bicycle that I am going to describe to you here is made like any other conventional bicycle with the only difference that it need not be peddled around. It actually runs on solar power.

Jesper Frausig is a Danish solar-energy engineer, who works for Gaia Solar, a solar-energy integration company based outside Copenhagen, where he lives. Like most of the Danes, Jesper is an avid biker. As per Government data, 90% percent of Danes have their own bikes and almost 36% of them use them to pedal to work every day. Frausig was always interested in electrically powered bicycles as they are completely pollution free. But normal electric bikes did not excite him at all because they are very heavy and not built for young people.

With his job as a solar engineer, Frausig had much specialised knowledge of how solar power systems work. He decided to put this in use and tried to come out with a bicycle that could be solar powered. He says that his knowledge of solar power facilitated him to design a bike with lightweight custom made components instead of what was available readily in the market, but decided not to change the basic two wheel design of a bicycle.

Frausig started by mounting a 500-watt electric motor on the pedal assembly. This would be powered by a lithium-ion battery pack, housed in a tubular container, which was mounted on the main frame of the bicycle. He decided that relying only on solar power to charge the batteries would be impractical as sunlight sometimes is not available for days in Denmark. He therefore provided a socket so that the batteries could be charged from a household electrical outlet.

Main solar panels to charge the batteries were fitted in form of disc-shaped arrays mounted inside the wheel spokes. Each wheel is capable of collecting 25 peak watts of solar energy on a sunny day. Although in the present version, it is possible to do it only when the bicycle is at rest. A lacuna, which Frausig wants to change in future versions. Another problem faced by present version is because of the solar panels having been integrated only on one side. This puts a restriction on panels that they can receive direct sunlight only on one side. In the present version, it can take five days to fully charge the battery, depending on sun conditions.

Because Frausig's bicycle has wheel mounted solar arrays, the wheels look similar to the disc wheels used by indoor track cyclists. The main problem with such disc wheel bicycles is that they are extremely sensitive to crosswinds. Frausig wants to overcome this by increasing the density of the solar cells on the rear wheel and eliminate them completely from the front wheel. 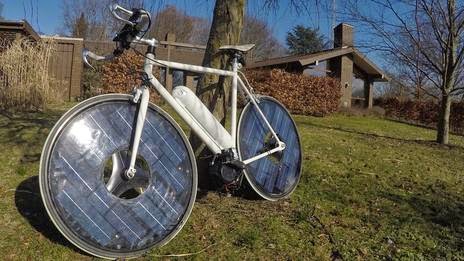 Frausig's bicycle is a single gear ratio bicycle that can run at 30 mph under optimal conditions and the bicycle can run about 40 miles on a fully charged battery. The desired speed can be set on a handlebar-mounted control. Sensors fitted in the pedals adjust the speed of the motor so that the motor is always supplementing the pedal power.

Frausig's bicycle would not be available at present for customers, who might wish to buy one. He feels that the bicycle needs lots more improvement and wants to further improve it, before it can be made commercially and sold to people. One thing is for sure. His bicycle has generated much interest for two things; first being it's sporty design with only about 19 Kg weight instead of typical e-bikes weighing around 35 Kgs. Perhaps the most important reason for interest of people is that it is solar powered and that is why people stop Frausig any time, when he is riding his bicycle, and ask him, what is he riding?