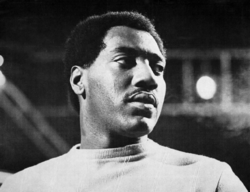 This week's song "(Sittin' On) The Dock of the Bay" is a song co-written and performed by Otis Redding just days before his death in a plane crash. The song went on to become the first posthumous single to top the charts in the US. It charted at number 3 on the UK Singles Chart.Billboard ranked the record as the No. 4 song for 1968. It went on to gain success in countries across the world, and sold more than four million copies worldwide. It won two Grammy Awards: Best R&B Song and Best Male R&B Vocal Performance.

Otis Ray Redding, Jr. ( 1941 – 1967) was an American singer-songwriter, record producer, arranger and talent scout. He is considered one of the greatest singers in the history of American popular music and a seminal artist in soul and rhythm and blues.
Enjoy!

If you can not see the embedded video on your android devices, here is the link. https://youtu.be/rTVjnBo96Ug You can also copy and paste the link in your You Tube App. If that also does not work, search You tube, (Sittin' On) The Dock of the Bay, Otis Redding

Email ThisBlogThis!Share to TwitterShare to FacebookShare to Pinterest
Labels: (Sittin' On) The Dock of the Bay, Long forgotten musical tracks, Otis Redding