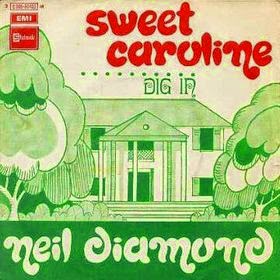 "Sweet Caroline" is a soft rock song, that was performed by American artist Neil Diamond and was officially released on September 16th, 1969, as a single. The song reached #4 on the Billboard chart and eventually went platinum for sales of one million singles. In 1971, it reached It later reached #8 on the UK singles chart. Neil Diamond Diamond revealed in 2007 that the real inspiration for his song was John F. Kennedy's daughter, Caroline, who was eleven years old at the time it was released. Ever since then the song has remained continuously popular, and by November 2014, there have been over 2 million digital downloads in the United States.

Neil Leslie Diamond is an American singer-songwriter, who holds distinction of having sold over 125 million records worldwide of his songs and is one of the world's best-selling music artists of all time
Enjoy!

If you can not see the embedded video on your android devices, here is the link. https://youtu.be/NsLyI1_R01M You can also copy and paste the link in your You Tube App. If that also does not work, search You tube, Sweet Caroline,Neil Diamond
19th April 2015