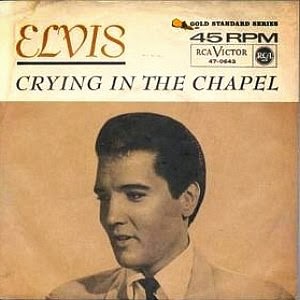 You saw me crying in the chapel
The tears I shed were tears of joy!

It turned out to be the the greatest chart success for Presley over a six-year span. It hit number three on the Billboard Hot 100 singles chart and topping the Easy Listening chart for seven weeks. The single reached number one on the British charts in 1965 where it stayed for two weeks.The single was eventually certified "Platinum" by the RIAA for sales in excess of one million units in the US

If you can not see the embedded video on your android devices, here is the link. https://youtu.be/11W34yK2So8 You can also copy and paste the link in your You Tube App. If that also does not work, search You tube, Crying in the Chapel, Elvis Presley
5th April 2015