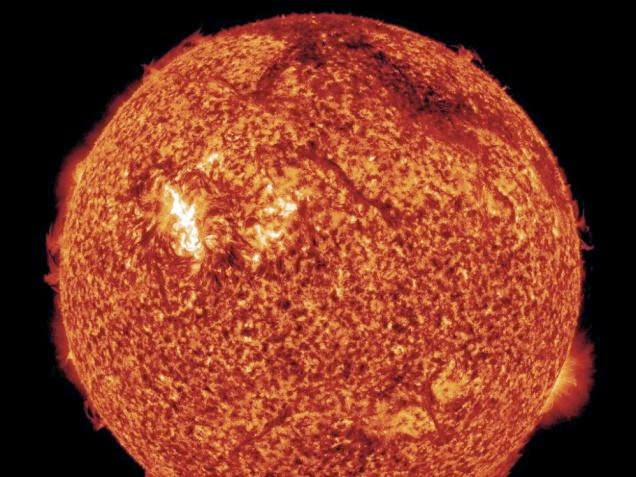 The sun is the most powerful and easily accessible source of energy to us. India's landmass gets about 300 clear, sunny days every year. According to an estimate, India's theoretical solar power reception, on only its land area, is about 5000 Petawatt-hours ( 10^15 watts x hours) per year. The daily average solar energy incident over India varies from 4 to 7 Kilo watt hours for every square meter of land with about 1500–2000 sunshine hours per year.

But how does sun produce all this energy? To understand this, we need to go to basics of particle physics. All matter has mass, which means that the mass is the basic quality of matter. scientific community believes that the universe has been created by 12 types of basic particles which include Quarks of 6 types, Electrons and some more particles, which have a short, transitory life. There are also forces that gather atomic and sub-atomic particles at designated places, assemble them in required order and then hold them together permanently. First of these forces is the Gravitational force, whose power, we all know. The next force is the electromagnetic force, which makes all electrical stuff that we use work and has a profound effect on the daily life of modern humans. Going to sub-atomic level, this force ensures that the nucleus and the electron stay together in form of the atom, which happens to be the basic building block of all the materials we use. The third or the strong nuclear force ensures that atoms and electrons form various orders and arrangements and stay in those arrangements in spite of disturbing effects of the electromagnetic force and actually give us all the elements of the periodic table.

There is one more basic force known as Weak nuclear force. This works essentially for the nuclear transformations that go on inside the stars, which also includes our Sun. This force is principally responsible for getting us the energy from the Sun or in reality, our life. How does the Sun manage to perpetually create all this uninterrupted energy? Sun is a perfect spherical ball of hot plasma, the fourth state of matter. Plasma is a highly ionised gaseous state of matter. A plasma can be created by heating a gas and subjecting it to a strong electromagnetic field applied with a laser or microwave generator. This decreases or increases the number of electrons, creating positive or negative charged particles called ions, and is accompanied by the dissociation of molecular bonds, if present. The presence of a significant number of charge carriers makes plasma electrically conductive so that it responds strongly to electromagnetic fields. Like gas, plasma does not have a definite shape or a definite volume unless enclosed in a container. Plasma also is the most abundant form of ordinary matter in the Universe. Plasma shows internal convective motion like a gas cloud and also generates a magnetic field like a dynamo process. 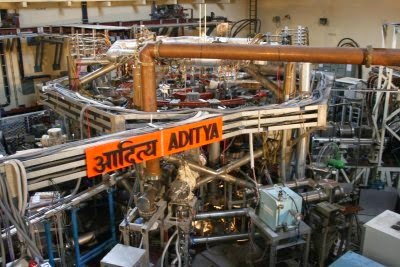 The energy is created inside the sun by a nuclear process known as fusion in which hydrogen nuclei, bound together by strong gravitational force, fuse in a chain of reactions to produce finally Helium. The actual reaction takes place in three steps. In the first step two protons (hydrogen nuclei) fuse to produce a deuterium ( a stable isotope of Hydrogen, nucleus of which contains an additional neutron) and a positron ( an electron like particle with a positive electrical charge.) In the second step this deuterium atom fuses with another hydrogen proton to produce a light isotope of Helium, He3. After these two steps are repeated, resultant two atoms of He3, further fuse to produce He4 atom and release 2 neutrons.

The most basic problem with Plasma is that it is extremely difficult to confine it in a Steady State so that it can function like the sun. This can be done by confining it in a special Super Conducting vessel known as Tokamak by passing Electric current with microwave wavelengths through it. This keeps the plasma hot and confined inside the Tokamak. A current of the order of 70,000 amperes is passed and plasma is heated to 200 to 300 million degrees. In such process, plasma gets confined inside and through that heat, energy can be generated. 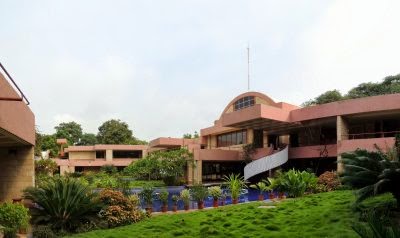 Institute of Plasma Research( IPR), located on the outskirts of Indian city of Ahmedabad, is an autonomous physics research institute. It is involved in research in aspects of plasma science, including basic plasma physics, research on magnetically confined hot plasmas and plasma technologies for industrial applications. It has been running experiments on hot plasma for last 25 years with the contribution from nearly 50 scientists. 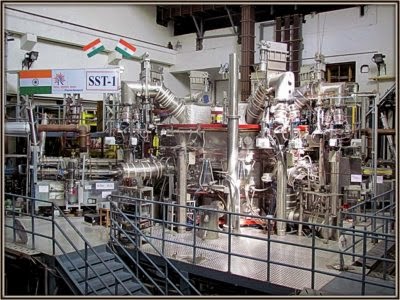 IPR has been successful in producing and confining plasma inside the Tokamak from Hydrogen gas with the help of superconducting magnets. This is very similar to what happens inside the Sun and s similar to creating sun-like energy inside a laboratory. This heat can be extracted in the form of energy and can be connected to turbines to generate electricity. The process is so energy efficient that about 5,000 MW of thermal energy can be produced by using just 50 MW of electricity.

IPR's successful experiments have brought in the realms of possibility, generation of power, exactly in the same way the sun has been doing it for us for Billions of years, even when we were not there.