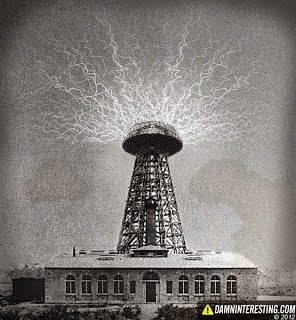 Nikola Tesla, (1856- 1943) was a Croatia born (He was born to Serbian parents in the village of Smiljan, Austrian Empire,modern-day Croatia as per wikipedia) scientist and later became a naturalized American citizen in 1891. He is remembered for his work in the fields of high-voltage electricity and development of radio transmission, where he made many discoveries and inventions of great value. The most well known of his inventions is a coil that can generate high frequency currents and a transformer, which boosted these alternating currents to a high voltages. This coil is actually named after him and is known as a Tesla coil. He also won fame for his victory over Thomas Edison in the well-publicized "battle of currents," where he proved that his alternating current was far more practical and safe than Edison-brand direct current. Soon his technology dominated the world's developing electrical infrastructure, and by 1900 he was widely regarded as America's greatest electrical engineer.

One of the pet projects of Nikola Tesla was the development of a system of transmitting electric power without wires, though the project never got completed because of lack of enough funds and obvious technical flaws and glitches. In 1905, a team of construction workers in the small village of Shoreham, New York, started work to erect a truly extraordinary structure. Over a period of several years, they had managed to assemble the framework and wiring for the 187-foot-tall 'Wardenclyffe Tower,' on top of which perched a fifty-five ton dome of conductive metals, and beneath it stretched an iron root system that penetrated more than 300 feet into the Earth's crust. Tesla wanted to make this tower a part of a chain of "magnifying transmitters" across the globe, saturating the planet with free electricity and wireless communication as early as the 1920s. According to his plans, towers like the one at Wardenclyffe, would send columns of raw energy skyward into the electricity-friendly ionosphere fifty miles up. To tap into this energy, all that the customers would require would be a relatively small spherical antenna on the roof of their homes along with a buried ground connection. Between these two, enough electrical power would be available for their domestic use. Tesla could never complete his tower and eventually it was dismantled. However concept of wireless transmission of electricity, has always remained as a topic of hot interest amongst researchers in this field. 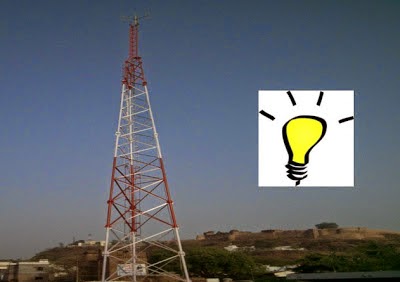 I remember a visit that I had made many years ago, to a high power radio transmitter of 'All India radio' used for transmitting medium wave band radio signals. The engineer, who took us around, had given us an interesting demonstration of the power that was being transmitted. He had connected a normal 230 V household use, incandescent bulb to a short loop of wire. When this wire loop- bulb arrangement was taken near the transmission tower, the bulb had lit up drawing electrical power from thin air, proving to us that high frequency electrical power can be transmitted through thin air without any cables.

Sun is the largest source of energy for earth. To illustrate how much energy the Sun sends to us, we can consider India's land mass. According to an estimate, India's theoretical solar power reception, on only its land area, is about 5000 Petawatt-hours per year. The daily average solar energy incident over India varies from 4 to 7 Kilo watt hours for every square meter of land with about 1500–2000 sunshine hours per year. This is far more than current total energy consumption of India. But the main problem in setting up a solar power station on surface of earth is that it can generate power only during daylight hours and that too when the sky is not cloudy.

To overcome this problem, can we station our solar panels above in space? This appears quite feasible with present status of space technology. However we still would face two hurdles. Firstly how do we send the electric power generated in space, down below on earth? And secondly even if we have an arrangement to do that, how do we keep the solar panels up in space in a stable position relative to receiver's position on earth?

The second problem is easier to solve. there is a specific region in space, which consists of a single ring above the equator, approximately 35,800 km high up into space and is known as a Geostationary orbit and many more rings that are inclined to this ring above equator. Any object placed at this height is pulled by gravitational forces of earth and moon in such a way that they exactly balance out each other, or in other words, a solar panel placed here will move in an orbit with exactly same speed as that of earth. This means that for an observer on earth, the satellite appears stationary all the time.

Now returning to the first problem, even if we have a solar panel permanently placed in a geosynchronous orbit position above us, that is generating electricity 24 X 7 in space, how do we get that power back on earth. Perhaps Tesla's ideas might help!

In a breakthrough, Japanese researchers have successfully transmitted electric power wirelessly to a pinpoint target. But unlike Tesla's 'Wardenclyffe Tower,' they have done this by converting direct current (D.C.) electric power generated by solar panels into microwaves,( Microwaves are a form of electromagnetic radiation with frequencies between 300 MHz (0.3 GHz) and 300 GHz. Compared to our domestic electric power, which has a frequency of 50 or 60 Hz only.)

According to Japan Aerospace Exploration Agency, or Jaxa, the researchers were able to transform 1.8 kilowatts of electric power into microwaves and transmit it with accuracy into a receiver located 55 metres away. This breakthrough certainly brings space-based solar power closer to reality. At the receiving point, the microwaves were successfully converted into direct electrical current.

This experiment done in Hyogo prefecture in western Japan last week, really opens up great new possibilities for future. Yasuyuki Fukumuro, a researcher at Jaxa, says that the concept can be put to practical use around 2030. He adds; “a receiver set up on Earth with an approximately 3-kilometre radius, could receive up to one gigawatt of electricity, about the same as one nuclear reactor.” 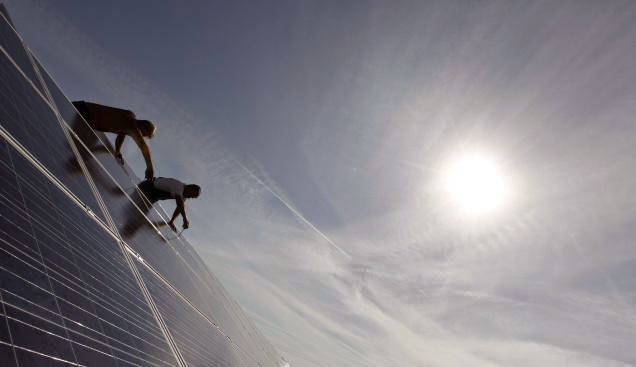 Obviously, the concept requires much more work, as establishing a principle is quite different from producing a practical contraption or a system that would generate power at high efficiency and low cost.