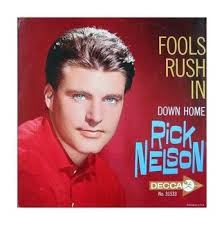 “Fools rush in where angels fear to tread
And so I come to you, my love, my heart above my head
Though I see the danger there
If there's a chance for me, then I don't care”

Says a popular song “ Fools Rush in”, first written in 1940. This week we feature the song performed by Ricky Nelson. This version was an enormous hit, reaching #12 in the Billboard pop charts and would become the most famous version of this song. It had also featured in a film produced in 1963 with the title “Scorpio Rising.”

If you can not see the embedded video on your android devices, here is the link. https://youtu.be/oqiOBp4ITlM You can also copy and paste the link in your You Tube App. If that also does not work, search You tube, Fools Rush in, Ricky Nelson
29th March 2014