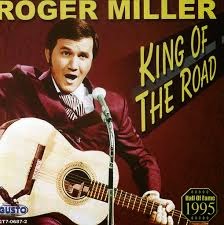 This week's track will delight the hearts of the lovers of American Country Music.
The song, "King of the Road" was written and performed by country singer Roger Miller ( 1936-1992) in 1964. The lyrics narrate the day-to-day life of a vagabond,who despite being poor describs himself humorously as the "king of the road". The single hit No. 4 on the Billboard Hot 100, and No. 1 on their Country and Easy Listening surveys. It was also No. 1 in the UK Singles Chart, and in Norway. The song has been re-recorded by many other singers including Dean Martin and has been used in many Hollywood feature films including recent Brokeback Mountain.

If you can not see the embedded video on your android devices, here is the link. http://youtu.be/7HBQFjoqDYE You can also copy and paste the link in your You Tube App. If that also does not work, search You tube, King of the road, Roger Miller