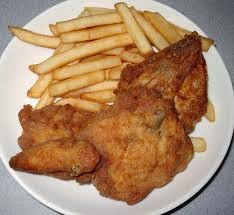 I read a story somewhere about a seven year old boy, who was asked by his class teacher, during his arts class to draw a chicken on a piece of paper. He immediately and gladly accepted the task and went ahead with his colour pencils and all that stuff and was totally engrossed in the task for next half an hour. He returned his drawing to the teacher, happily expecting that it would be appreciated and he would get some like 'stars' as is the practice these days. Expecting the drawing to contain at least some outlines of a domestic fowl with feathers and a red beak, the teacher was most surprised to find in the drawing a plate in which some long yellow things were drawn along with an orange coloured blob. When the boy was asked to explain, what he had drawn, he explained that the plate shows potato chips and chicken; the way his mother always gives to him. He must have seen pictures of fowl in his books, but for him chicken meant a dish that his mother cooked or ordered in a restaurant.

It would be easy to conclude from this story that the boy was so ignorant because he must have been a city lad. No kid from the village would make such a mistake because he must have seen fowls running around. I however feel that this kind of ignorance is far more wide spread and is not just restricted to kids. It essentially comes from the principle of division of labour, the underlying and guiding principle of modern societies. Just name few of the things, we consume or use in our day. I am sure that not many would be able to explain, how these things are produced or where from they come. Let me explain. How many of us know, how the fine cotton shirt, we are wearing is actually produced? Or where from the ink in a fountain pen comes or how it is made? As a cog wheel in the society, we all have certain skills, which we make available to the society. Using my skills, I do some work for which I am remunerated. From this remuneration I can get other goods and services and I do not have to know how they are produced.

Once, a group of my friends and their wives were visiting Mahabaleshwar, a lovely hill station near my home town. While returning, we saw a board showing direction to a strawberry farm. We turned in and went to visit the farm. I had seen strawberry bushes earlier and knew that this fruit does not grow on trees but on small or dwarf bushes. Many from our group were really surprised to seen the strawberry bushes as they were expecting trees similar to mulberry trees. This surprise was a mild one compared to the reaction shown by a lady from our group later. On the way, we saw another board about a sericulture farm and timings, when it was open. We went in and saw how silkworms are cultivated on leaves of mulberry trees and when the cocoons are ready, how they are boiled and silk thread is unwound. This lady was shocked to know that the silk cocoons are boiled in water when the silk worm was still inside, just to kill him. She felt that it was too cruel a step to get a fine gossamer fabric for our luxury. She happened to be, till that date, rather fond of silk sarees. I never saw her again in a silk saree after that day. 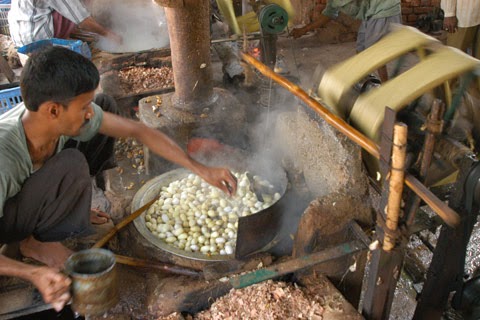 We are such cocooned and protected lot today that we are becoming ignorant about realities that support our lives. Humans have been killing and eating other animals ever since they evolved. Yet how many of us city dwellers really know about abattoirs, where we kill animals to get our meat or poultry. For most of us a chicken leg is just a frozen packet, which we remove from the deep freezer. I am quite sure that the reality will shock many meat lovers.

Indian ladies are fond of fine sarees with intricate in lay designs. How many of them really know, how labourious and time consuming work it is to weave a saree on a hand loom, which they wear on an evening. I am not trying to say that we go back to primitive societies, but we should not become blind to the hard work that is put in by some one to make available all our daily needs and luxuries. We are loosing our connectedness with the society and even worst; with nature. 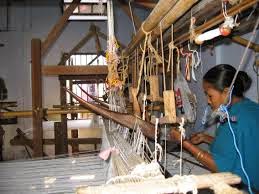 Just a generation or two earlier, man lived, adjusting himself to ever changing nature. During summer, when even nights became hot, he slept outside his house on terraces. He ate freshly cooked foods. During monsoon months he avoided travelling. Certain foods were recommended or avoided during each of the seasons. With the division of labour principle, there is now always someone else to take care of all eventualities. Now we have air conditioners, antibiotics to protect us. Instead of avoiding travel during monsoon, we insist to travel to places where monsoon fury is highest. I am not really against any of these things. What I feel is that we should be aware of realities a little more and the risks. A seven year old boy should know what a chicken is and certainly it is not only something that his mother serves.