"Cheating at Exams" capital of the world 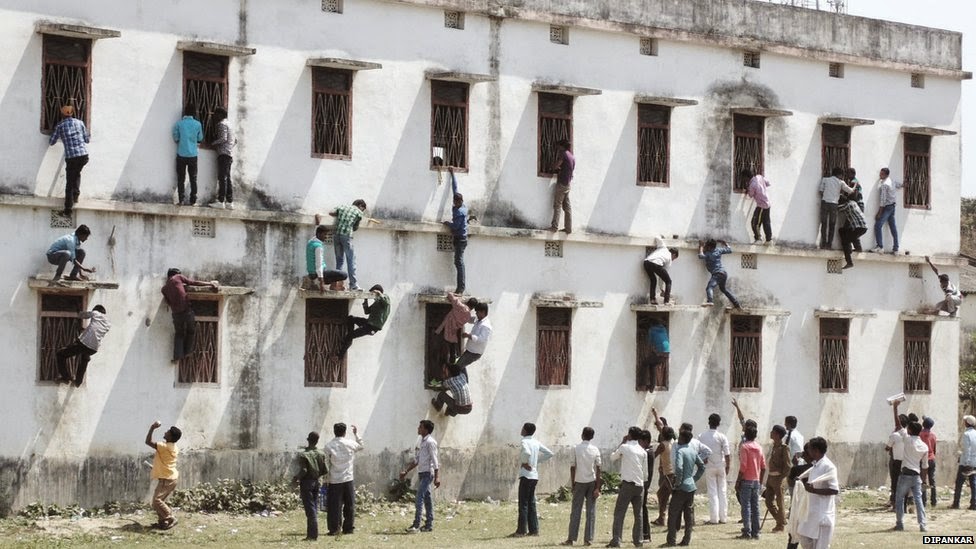 We all have fixed ideas in our minds regarding what is fair and what is not? Even my 7 year old granddaughter has her own fixed ideas. If she observes that her elder sister is being favoured with more than an equitable share of something, she gets angry and starts questioning whether it is fair? We also feel in a similar way many a times in our daily lives. Imagine standing in a long queue in the bank or for buying movie tickets. If we observe someone breaking the queue, we all get angry because that queue breaker could get an unfair advantage of finishing his work in minutes, whereas we would be waiting patiently for next half an hour or so. Our feelings can be best described as righteous indignation. It is the reactive anger over perceived mistreatment, insult, or malice. It is akin to what is called the sense of injustice.

Copying at exams is one such disgraceful act, which brings out such reactive anger in all of us. A copying student, using unfair means to get through exams for which he has not studied well, surely means a gross injustice to hard working, honest students, who might have slogged for months to study and learn the subjects. When I was a student, copying was considered as the worst crime a student can commit. If caught, he faced no sympathy, but immediate disqualification from appearance at the examinations. Not only that, he probably was never allowed to attempt again to appear for that examination. It was the end of his educational career.

Luckily, things have not changed much in my home town Pune, over the years. Copying is still looked at as an criminal act, though the punishment is no longer that harsh, the student allowed to re-appear for the examination at a late date. In fact all over Maharashtra state, the standards are being held, though at some places, we do get reports of copying being resorted to.

I brought up this subject today, after seeing a report yesterday about mass copying going on in one of India's poorest states, Bihar. Cheating in Exams has been routinely done here but latest reports show just how large-scale and blatant the practice is. It is incredible and unbelievable that even parents and relatives try to help their children to cheat even at considerable risk to their own lives.

The school leaving or the Board examinations for Standard X students have began in Bihar this week on March 17 and would conclude on March 24. Over 14.26 lakh students are appearing at more than 1,100 centres. Most of the incidents of cheating this year have been reported from Saharsa, Chhapra, Vaishali and Hajipur districts. According to board officials, the friends and relatives of examinees go to extent of pelting stones at authorities, who try to prevent this cheating going on. They are bribing policemen and teachers to pass on chits to their wards writing the examinations. People scaled walls to hand over chits to examinees from the windows at centres in Sharsha and Khagaria districts. Reports also say that over 1,000 examinees have been expelled in the first two days for using unfair means. A schoolteacher at Vaishali says that friends and family members of the examinees gang up to threaten intimidate the teachers if they try to stop the cheating at an examination centre.

Bihar's State Education Minister is feeling helpless as he is finding that stopping these malpractices in Board examinations was a huge task. While seeking public cooperation for conducting free and fair examinations in the State he says:

“It is a big challenge to stop 100 per cent unfair means in the examination. I also want to ask people if it is not the responsibility of society as well to stop it?”

The press photographers, who went to take photos of students copying, were surprised to find that the students writing the examinations were not worried at all as photographers clicked their pictures. A report says that the authorities seized sheets containing answers, which filled up nine sacks during a raid at just one school.

As per laws in Bihar, a person caught cheating can be barred from taking an examination for up to three years, he can also be jailed or ordered to pay a fine, but punishment in such cases are very rare. Nearly 20 parents were detained briefly for trying to help their children cheat, but they were let go after a warning.

It is obvious that the Government Of Bihar has a real problem on its hand as the entire credibility of the education in the state is at stake and can be doubted by anyone , who has seen the pictures, I have included here.