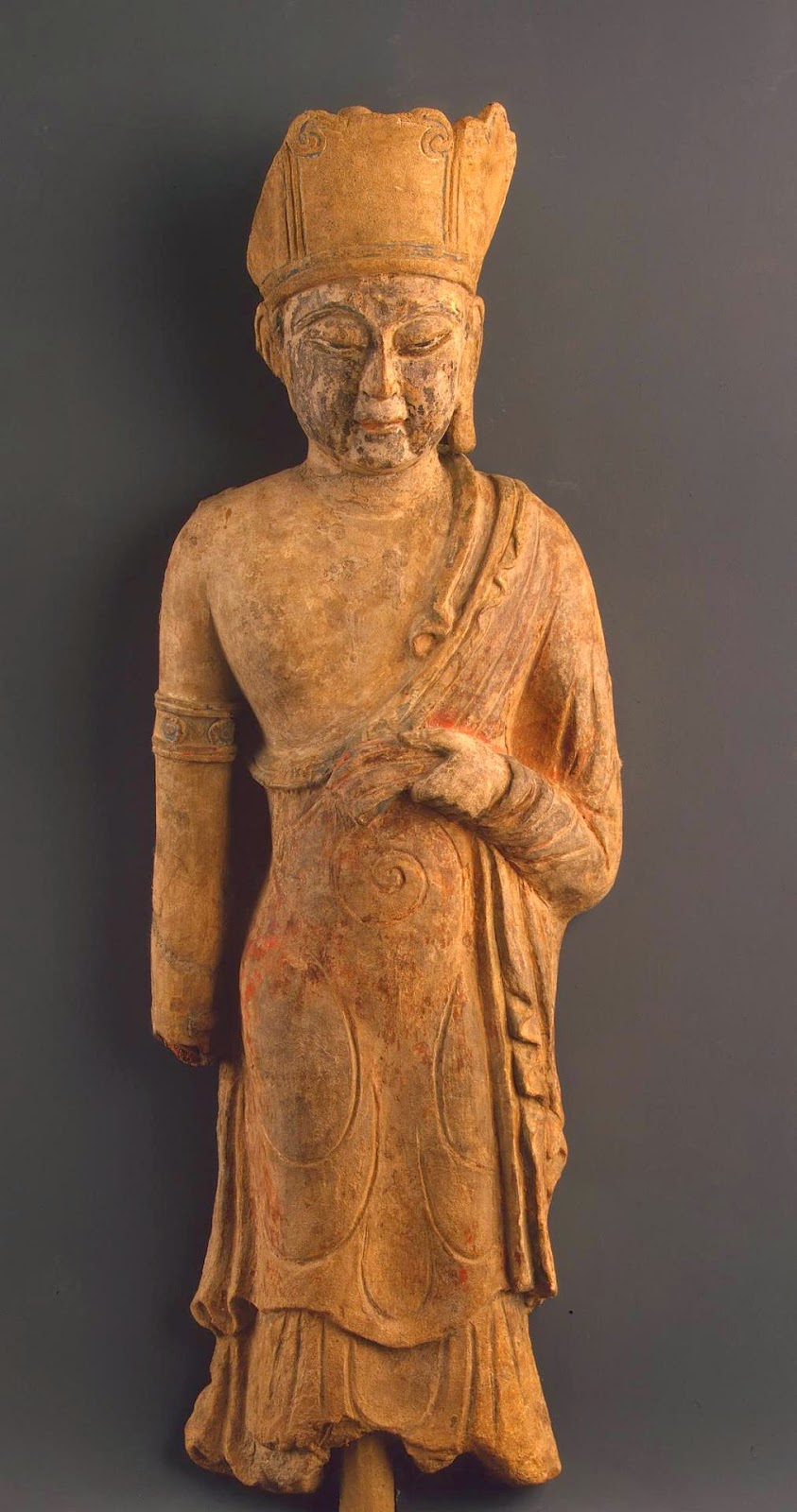 I have already mentioned before, that Tanguts held the Hexi corridor for 191 years through which the caravans on silk road moved. It nay not be an overstatement therefore to say that they were at the crossroads of three cultures: the Chinese, the Central Asian and Tibetan, which was culture of their ancestors. It is natural that Tangut art should draw from each of the three cultures in their works of art. The Tangut artists, over the centuries, tried to combine all three styles to create a distinctive, uniquely Tangut style.

In the concluding part of this series, let us have a look at some of the graphic images and figurines salvaged by Col. Koslov. His entire collection has been safely stored in the Hermitage museum in St. Petersburg, Russia. Before we see some examples of the wonderful art of the Tanguts, it might help to get some ideas cleared about various characters that are often repeated in Buddhist paintings.

The term 'Buddha' means an enlightened one and therefore anyone who attains complete enlightenment is called a Buddha. Prince Siddharth or Gautam is known as 'Shakyamuni Buddha' because of the name of the tribe to which he belonged; Shakyas. Bodhisattvas are the 'enlightenment heros' who have chosen to work, life after life, reincarnation after reincarnation, for the enlightenment of all humankind. Bodhisattvas have chosen to renounce their own freedom until all creatures are enlightened. Bodhisattvas are sent into the world by Buddhas in order to help living beings more effectively. Amitabha, Avalokiteshvara, the Green and White Taras, Vajrapani, Manjushri, and Samantabhadra are the Bodhisatvas that appear in these fine works of art produced by Tanguts. 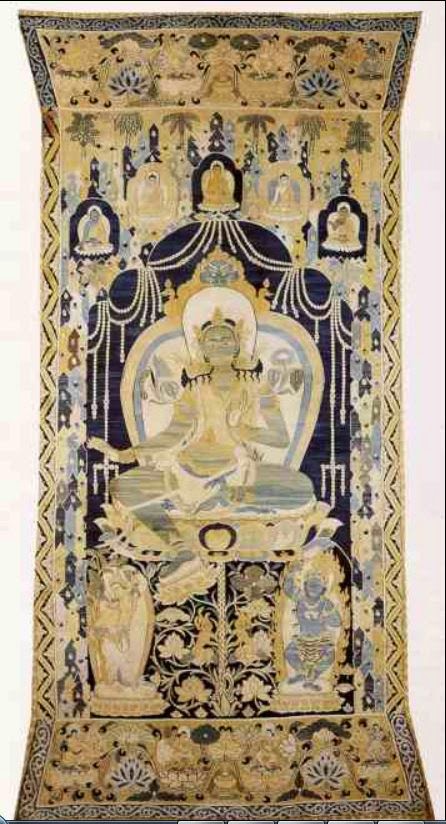 This is one of the finest example of Tangut art. This is not a painting but the figures have been woven in kesi technique (“incised silk,”a particular type of Chinese tapestry) like a carpet. This image can be attributed to the Tibetan school of the Tangut tradition. Tara's name means 'the one who saves', and her desire to save is said to be stronger than a mother's love for her children. In some myths Tara was born from the compassionate tears of Avalokiteshvara in the Pure Land (a concept very similar to that of heaven.) Tara is is the best example of the Bodhisattva as goddess, and represents the miraculous activities of all Buddhas by helping beings overcome difficulties on the path to enlightenment. The goddess is shown here seated on a lotus; above her are the five Transcendent Buddhas and flanking her two Taras: the benevolent Aśokakāntā, with a yellow body, and the blue angry Ekajatā. At the stem of the lotus are genuflecting nagas; above and below the composition are additional miniature figures of heavenly musicians and dancers. 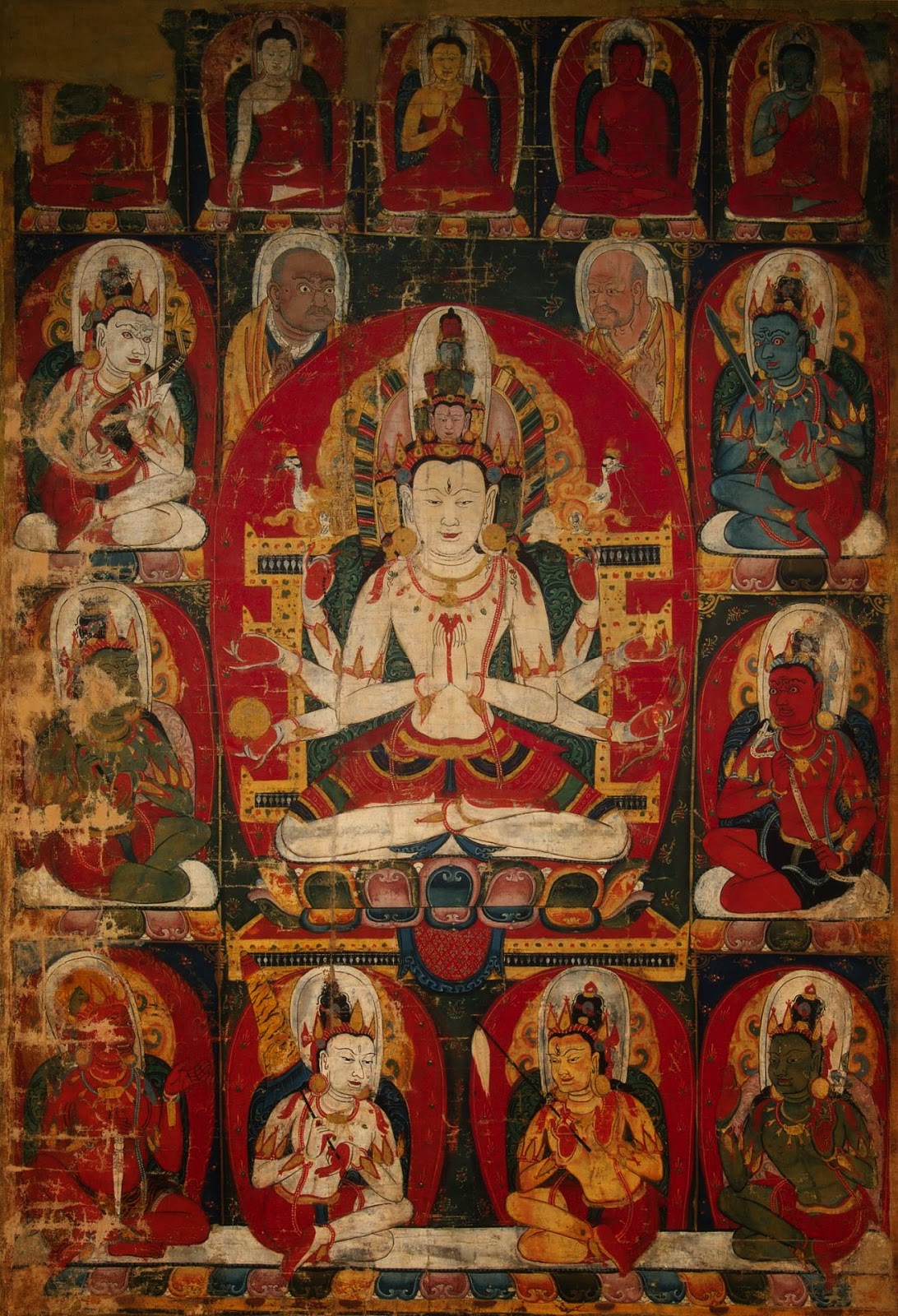 The Bodhisattva Avalokiteshvara is one of two Bodhisattvas (along with the Tara) that come from the 'Western Pure Land' of the Amitabha Buddha. Avalokiteshvara is the Bodhisattva of Compassion, and is said to have taken his vows to protect the people of Tibet, the 'Land of the Snows'. He is therefore often considered the protector of the mountain kingdom of Tibet. This painting on canvas shows Avalokitesvara with 11 faces. In Tibetan Buddhism this is one of the forms of Avalokitesvara and is known as Ekadasamukha. 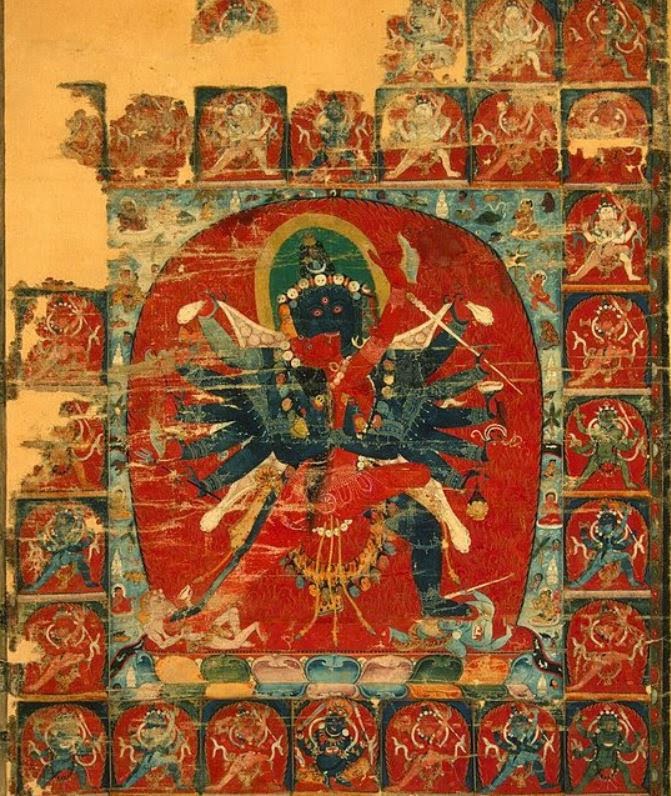 Here in this painting on linen, the male and female figures of Samvara avd Vajravarahi actually indicate Compassion and Wisdom. Buddhahood, or enlightenment, is often shown as the perfect union of compassion and wisdom. This whole is often expressed visually by the sexual union of a male figure and a female figure, or Yab-Yum, which is sometimes translated as Mother-Father. By meditating on this image, and imagining themselves to be both figures in the image, Tantric Buddhists gain an insight into the deeper aspects of reality. 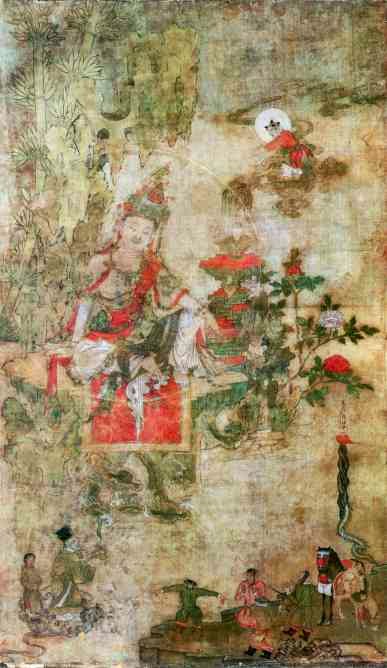 In Chinese Buddhism, Avalokiteshvara is often considered in a female form and know as Guanyin. In this painting on silk, she is shown sitting in western pure land (heaven). What is interesting is that at the bottom, some Tanguts are shown as playing musical instruments and dancing. There is pole on right that connects heaven with earth. On left, the figure in black cap is the emperor, who has died and is going to heaven. His grave also is shown next to him. In the upper right, the dead man is shown again, this time reborn as a boy,reaching out his hands to the Bodhisattva in prayer. 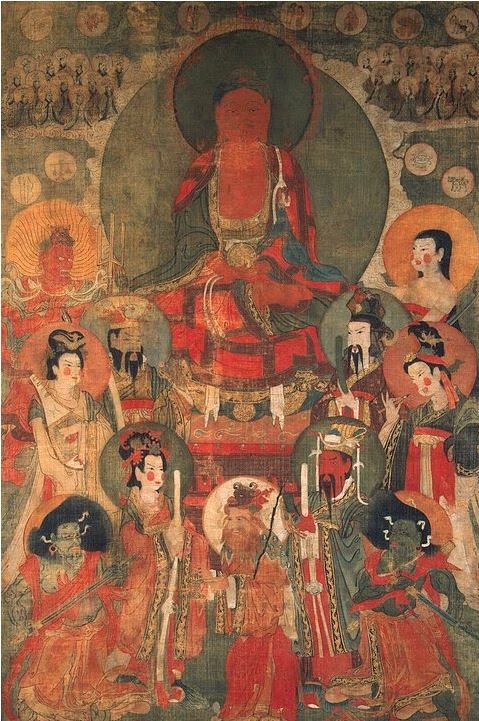 This is one of the most interesting paintings done with mineral colours on silk. It combines, Indian and Greek ideas about astronomy. Buddha is shown seated with 10 planets that include Indian imaginary planets of 'Rahu' and 'Ketu.' The Sun and the Moon are show as Emperor and Empress. All 12 signs of Zodiac of Greek origin such as Aries, Taurus, Gemini are shown in circles in two rows towards top. In between these two rows there are images in 28 circles in all. These are the Indian constellations along the Ecliptic, known as “Nakshatras.” This painting is perhaps the best example of mixing of ideas of Indian, Greek and Chinese origin that happened all the time along the silk road. 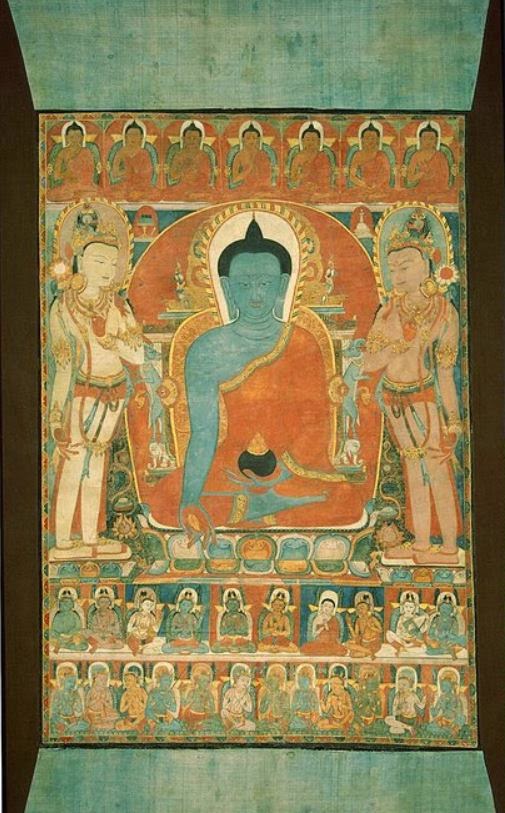 According to Mahayana Buddhism, Shakyamuni turned himself into a deep blue
Buddha, giving off healing rays of light, and taught a gathering of men and gods the science of medicine. In many Buddhist countries the Medicine Buddha, is the patron of medicine and healing, and the special god of physician. 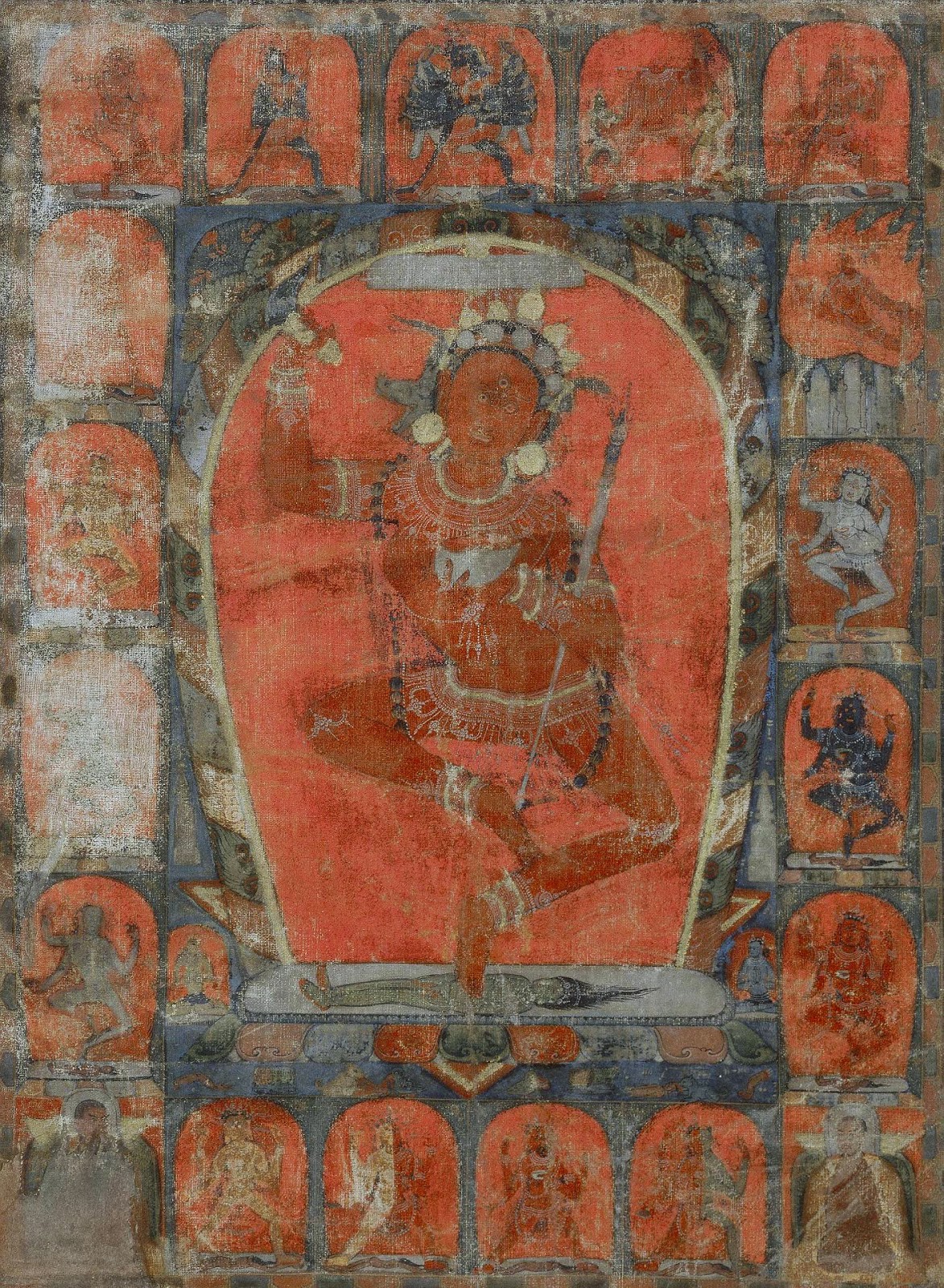 Tantric Buddhism believes the keys to enlightenment can be found in the human condition, however coarse or humble. They believe that even the most negative human emotions - hate, lust, envy, greed - can be turned enlightenment, or realisation of the Truth about reality. This belief is shown in pictures of 'wrathful' deities: Bodhisattvas trampling human bodies, Bodhisattvas drinking blood, Bodhisattvas carrying terrible weapons. Meditation on these frightening images help the viewer understand the possibilities for enlightenment even in the most dreadful aspects of human character. These images help the viewer understand how to change negative feelings into positive feelings. Vajravārāhī is one of the most popular female Tantric deities in all traditions of Tibetan Buddhism. She is shown one face, two hands and two legs, is usually red in colour, and standing in a dancing posture on a human corpse. She has a garland of human heads around her neck. She is also sometimes shown with a pig's head and that is why the name Varahi. 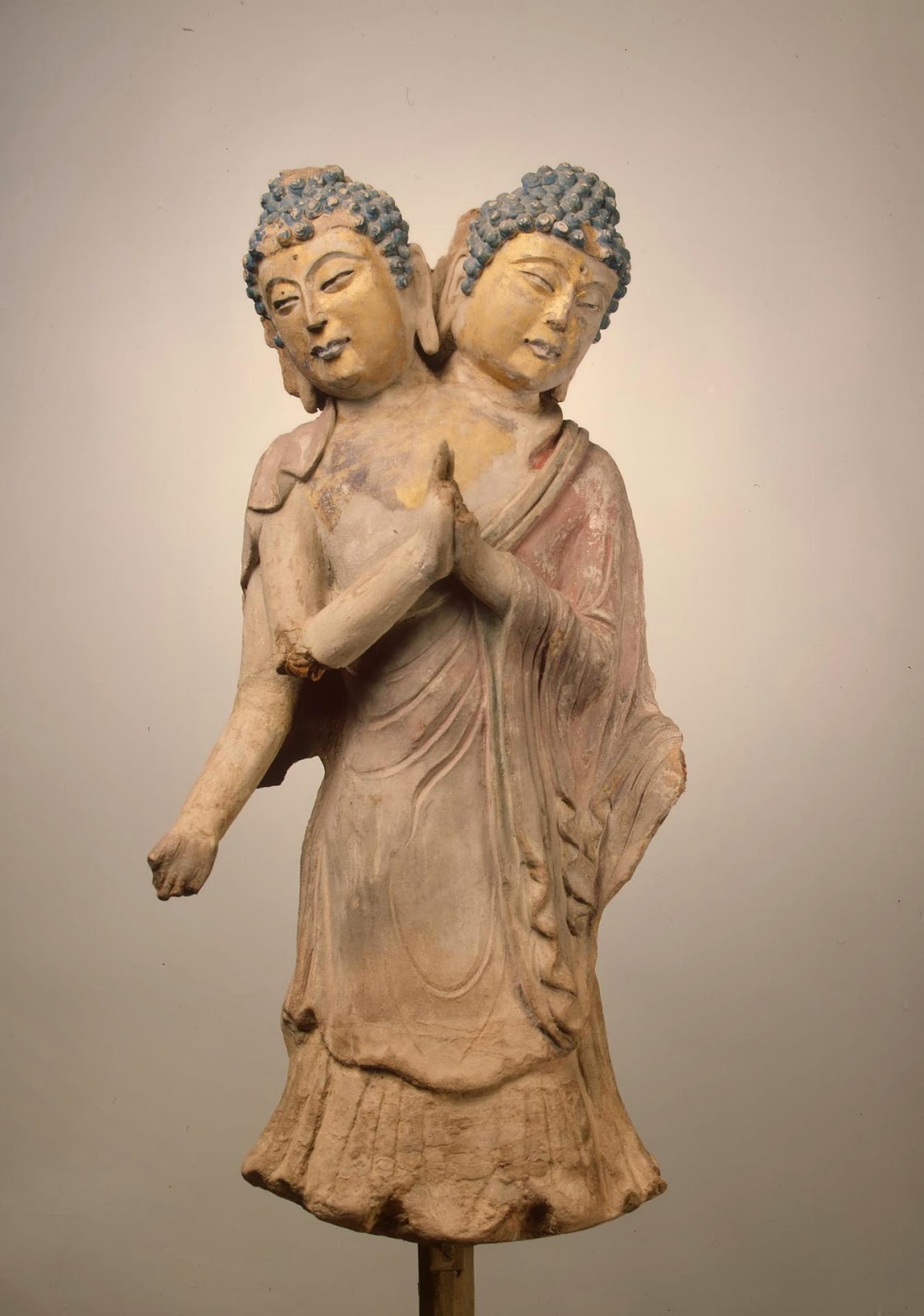 This story was told to a Chinese pilgrim during one of his long wanderings in the north:once upon a time, there were two men, both devoted to the teachings of Buddha. Each of them dreamed an image of the Buddha, but they were too poor to pay for two sculptures, so they asked an artist to make them only one. Buddha himself, in an act of kindness, divided the image in two. Kindness, or compassion, is an important teaching of Buddhism.
This clay statue was found in the stupa uncovered by Kozlov in 1909. The statue is made from the simple materials of earth and straw, but the artist has given the Buddha a smile and a gentle tilt to the head, and added colour and gold to the two faces to emphasise Buddha's compassionate nature.

The Hermitage museum carries more than 3500 works of art from Khara Khoto along with 8000 manuscripts. An unknown number is safely stored with British and India museums. Availability of such large number works of art indicate the quality of life of Tanguts. Tangut society was a 'melting pot' of Tanguts,
Chinese, Tibetans and Uighurs from Central Asia, and except for the rare
occasion when a native Tangut claimed seniority, all were considered equal
under Tangut law.

It is an irony of fate that such people and their culture was destroyed by the barbarians. Tanguts made the mistake of resisting the Mongols when they began to extend their control over the Hexi Corridor in the first decade of the thirteenth century. They were successful initially, but right at the end of his life in 1226-1227, Genghis Khan's armies destroyed the Tangut state. Along with it, the city of Khara khoto also disappeared into oblivion.