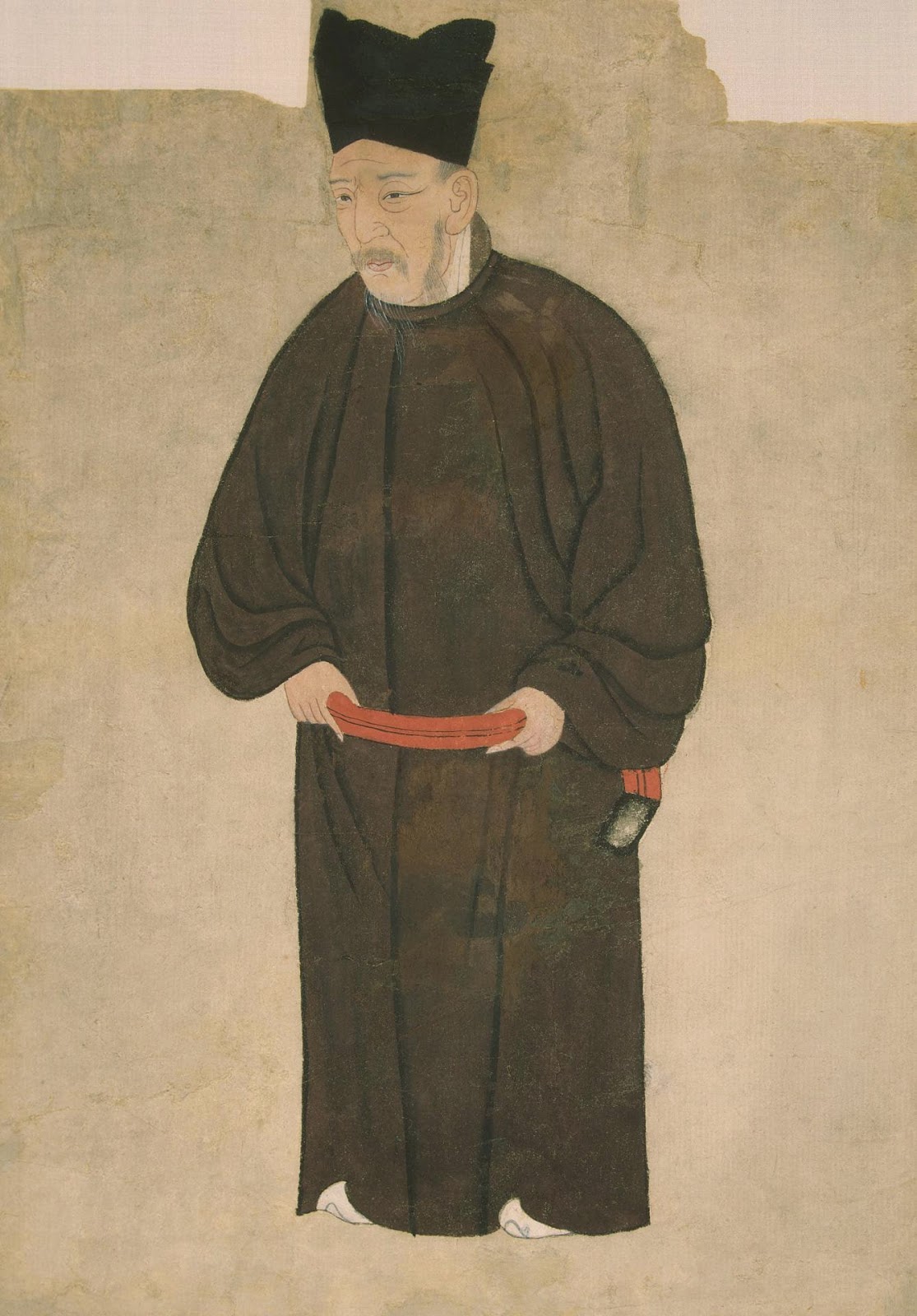 On his visit to Khara Khoto in 1914, Aurel Stein records his first impressions about the walled city in these words.

“ It was a striking site, the most impressive perhaps that I had seen on true desert ground, this dead town with massive walls and bastions for the most part still in fair preservation, rising above the bare gravel flat which stretches onwards it from the river bank. A conspicuous Stupa, of distinctly Tibetan appearance, crowning the big bastion of the northwest corner and a row of smaller Stupas on the ground outside the bastion, seemed at first sight to proclaim the predominantly religious character of the site.There was nothing in the surroundings of the dead town to impair the imposing effect created by the massive strength of the town walls and the utter desolation which reigned within.” 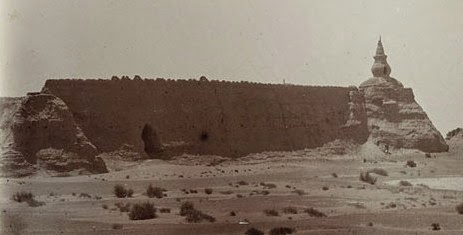 Another explorer. Langdon Warner, who visited Khara Khoto in 1925 describes it in more of poetic fashion in his book- The Long old Road in China:

“ No city guard turned out to scan my credentials now, no bowman leaned from a balcony above the big gate in idle curiosity, and no inn welcomed me with tea and kindly bustle of sweeping my room or fetching fodder for my beasts. One little grey hawk darted from her nest high in the grey wall, her set wings rigid, and sailed low over the pebbles and sparse thorn bushes of the plain. No other life seemed there, not even the motion of a cloud in the speckless heaven nor the stir of a beetle at my feet. It was high afternoon, when no ghosts walk. But, as sure as those solid walls were built up by the labour of men, just so sure was I that the little empty town had spirits in it. And the consciousness never left me by day or night while we were there.” 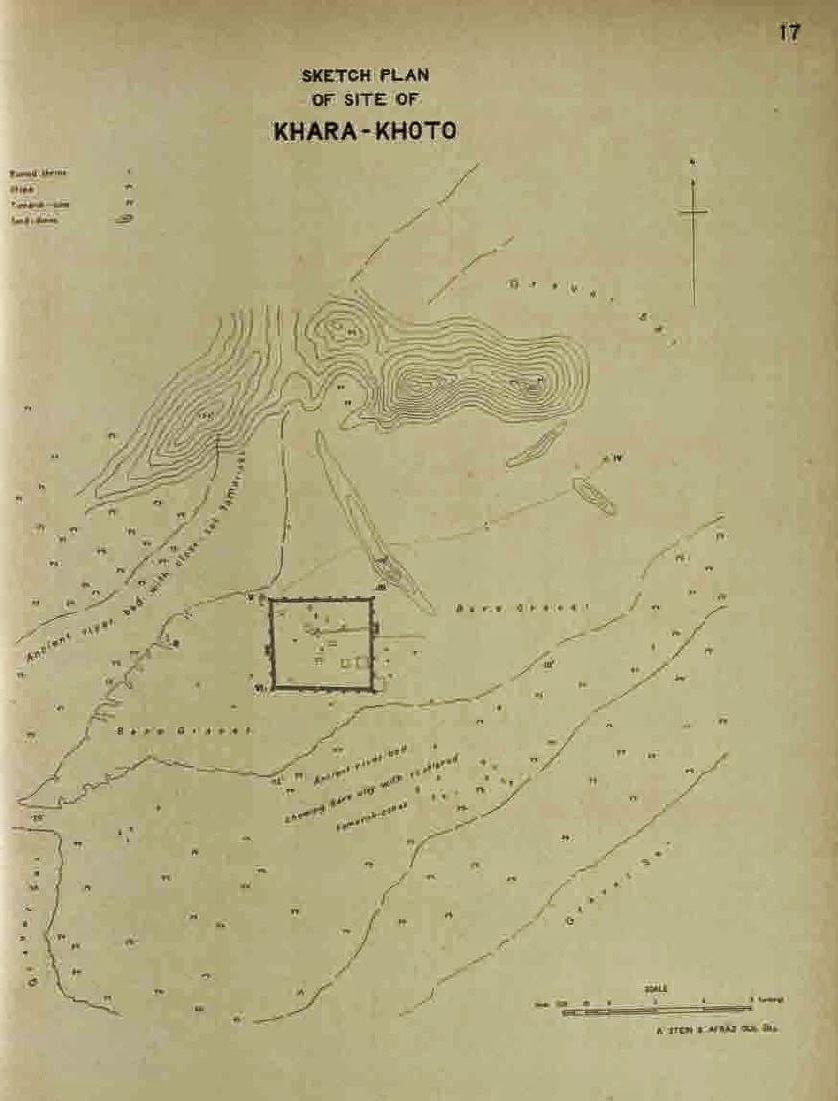 Aurel Stein, as per his usual practice, drew a plan of the walled city, with several structures and neatly laid out streets still visible in all pervading sand blown on them. Stein describing the site further says:

“The most striking ruins of the Khara Khoto are those of its circumvallation (surrounded by rampart). The plan shows an approximate rectangle neatly oriented. The area enclosed measure about 466 Yards on the north side and 381 yards on the west.... The walls are built of stamped clay and reinforced by a wooden framework of which the big rafters could be traced in three rows all around the inside faces of the walls. The walls are about 38 feet thick at the base... the width at the top, about 30 feet from the ground is only about 12 feet. The width is however greatly increased near the northwest corner where the top is crowned by the Stupas with a correspondingly greater thickness at base. In places a parapet about 1 foot thick, with loopholes still survives to a height of 5 or 6 feet. Ramps leading up to the top of the walls can be traced at the gates and at the north-western and south-western corners. Gates 18 feet wide, lead through the western and eastern wall faces, each protected by by a rectangular outwork built as massively as the walls themselves.” 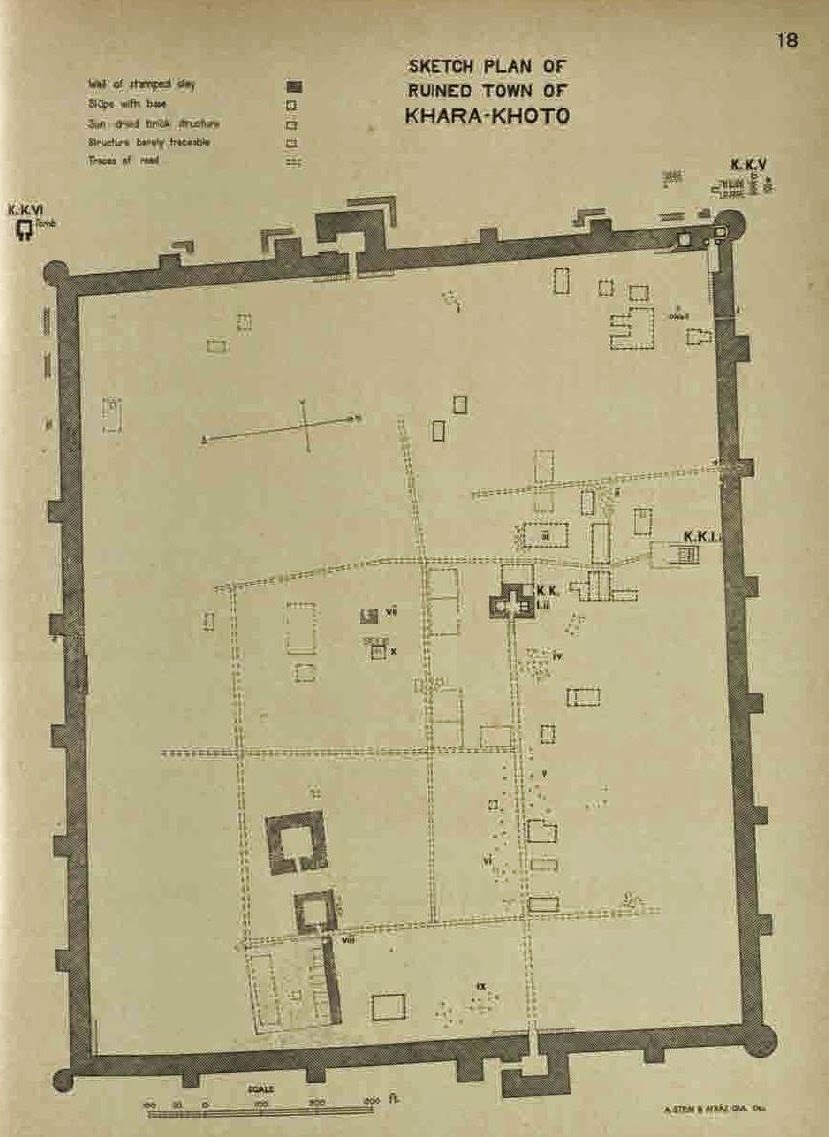 Stein found the ruins of only one temple (mentioned as K.K.I.ii in plans) within the outer walls. It occupied a conspicuous position at the end of the road, which led from the eastern gate towards the center of the circumvallated area. The temple was was built on a high platform of stamped clay measuring about 82 feet by 63 feet. South eastern portion of the interior within the walls appeared to have been occupied mainly by the “Sarais” ( dwellings for travellers) and like, whereas the western portion of the town appeared to have been mostly occupied by shrines. Stein was able to make a rich haul of fragments of silk and cotton pieces, iron daggers, hooks, pottery, porcelain, figurines, Buddha heads and many other things. He also discovered many manuscripts that were discerned to be Tibetan, Tangut, Turkic, Chinese and Uygur scripts. 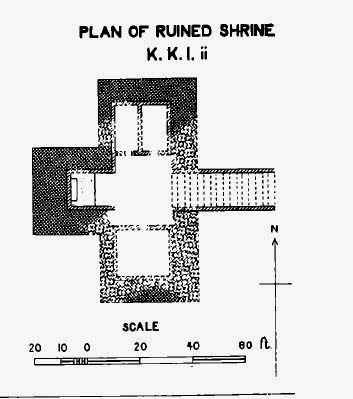 Readers would be able to appreciate from these descriptions, how solidly this walled city was built to protect not only against vagaries of nature but also from invaders. Strategically speaking, it was an important military outpost where the Tanguts stationed one of their 12 columns of armies. 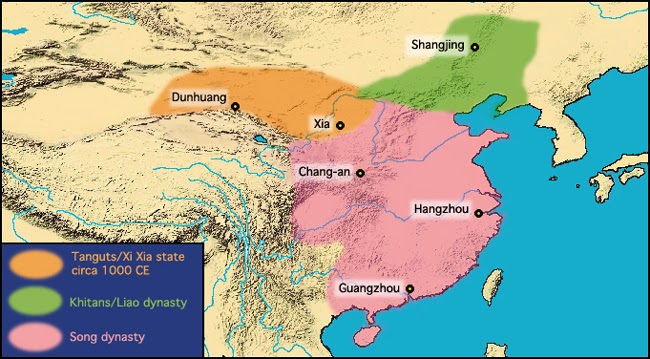 By the year 1038 CE, Tangut empire had become strong enough to control and hold the Hexi corridor, aposition which they held for next 191 years. However, in the thirteenth century the situation changed dramatically as a new power rose in Mongolia, that of much feared Genghis Khan.

From 1205 CE onward, Mongols led by Genghis Khan, attacked Tanguts six times, in 1207, 1209, 1217, and 1226-1227, to extend their control over the Hexi Corridor, retracting their forces each time even after inroad to Tangut capital. However Khara Khoto remained unconquered.

In the spring of 1226, Genghis Khan attacked Tanguts on some or other pretext with two columns of armies. During this campaign Genghis Khan took over Khara Khoto in month of February. Inhabitants were forced to convert to Islam. Mongols established a Tangut province in their empire and Khara Khoto continued with the name “Etzina” and struggled on. It was during this time that Marco Polo had visited the city.

During 1372 CE, troops of Chinese Ming dynasty attacked Khara Khoto and as per official records, the town's defender “Buyan'temur' surrendered. Documents found at the site by the explorers date no longer than 1380 and it can be concluded that the defeat, along with climate changes, which lowered the water table, forced the city's inhabitants to move away and Khara Khota city disappeared from memory.

The cultural legacy of Khara Khoto however lives on in form of paintings, manuscripts, figurines and documents preserved at Hermitage, British and National museums in Russia, England and India.