Availability of food and hungry of the world 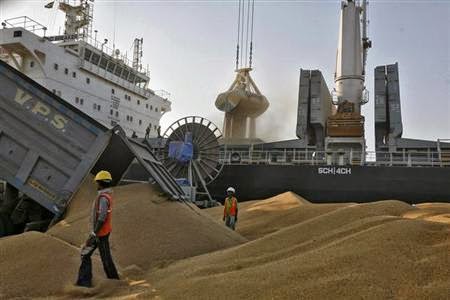 Just imagine a hungry small boy in a cake shop, absolutely bewildered by the mouth watering range of cakes, pastries, tarts and brownies nicely arranged in brightly lit show cases all around him. He wants to eat to his heart's content. Yet he has a problem, he only has a 1 rupee coin in his hand and with that he can not buy even a bread, leave aside cakes and pastries.

World's hungry perhaps are facing same kind of trouble today as world's food production has peaked again (2014) even surpassing the all time records of 2013. According to UN affiliated Food and Agriculture Organization (FAO), world cereal production has reached a new all-time record of nearly 2,534 million tonnes (MT) in 2014, beating the previous record of the 2013 by over 13 MT. This really means that in one decade, global cereal production has gone up by almost 25%, setting all-time high records in five years out of 10. The year ending stocks are at an all-time high of nearly 623 MT. Because of series of bumper harvests with not so bad years in between in last decade the prices af all main cereals are down sharply. 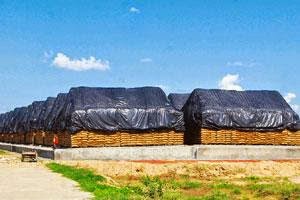 What about India? Total Cereal production in India was 245.5 MT with wheat production at 96 MT and rice production at 106.5 MT in 2013-14, compared to production of earlier year with wheat at 92.3 MT and rice at 105.31 MT, this indicates a substantial gain. All these figures are record breaking with a growth of nearly 33% over a decade, according to agriculture ministry estimates.

Does this mean that world's 805 million hungry (according to FAO estimates for 2012-14) now have enough food to eat? Sadly, the answer to this question is “No.” According to FAO estimates, out of 2434 MT, 1104 MT of cereals would be used for food consumption, and believe it or not! 876 MT of cereals would be consumed for feeding animals, which will ultimately be consumed as meat.

Samuel Taylor Coleridge was a poet, literary critic and philosopher from Eighteenth century England and was contemporary of William Wordsworth. He is probably best known for his poems, The Rime of the Ancient Mariner and Kubla Khan. Four lines from his poem about an ancient mariner, are rather well known and read:


And all the boards did shrink


Nor any drop to drink.”

With his ship, standing idle in the middle of sea for days, its no wonder that in spite of oceans of water surrounding him, this mariner can not find a drop of water that he can drink. Similarly, for Millions of 'below the poverty line' poor Indians, even when there are mountains of grains around, they have nothing to eat.

The bitter and hard truth is that even with plentiful food around, people are going hungry because they cannot afford to buy it. Poverty is the main reason for hunger and not cereal production or trade flows.