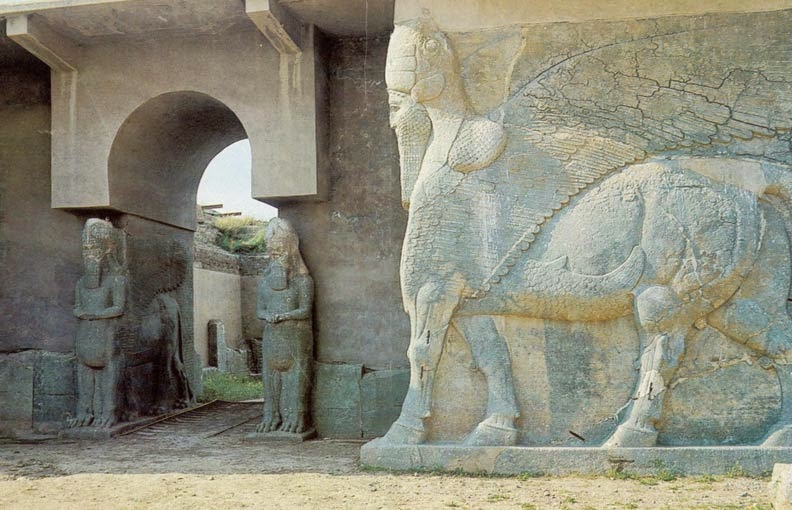 2nd March 2001, turned out to be the blackest day for all history and archeology lovers of the world, because on this day, Afghanistan's Taliban rogue forces began their most criticized task; that of destroying the Bamiyan Buddhas. In spite of repeated requests from all over the world not to destroy Bamiyan Buddhas and make the world loose one of its historic monuments, they went ahead and completed the task after several weeks. They could not destroy the massive Buddha idols with gun shots and had to use missiles and tank mines to complete the job.

No one knows exactly when the Buddha statues were carved out of the rock, but they were there in full glory when Xuan Zang visited Bamiyan in 632 CE. It is generally assumed that the statues were carved out during first two centuries of the first millennium, when Kushan kings ruled Afghanistan. In spite of the statues having such important historical heritage status for Afghanistan, Taliban not only destroyed them completely but even boasted about that to the world.

Within 8 months from destruction of Bamiyan Buddhas, the Taliban rule in Afghanistan ended with US and NATO forces intervening along with forces of Northern alliance and world heaved a sigh of relief. It was hoped that such wanton destruction of heritage artifacts of tremendous historical values would not be repeated anywhere else in the world. Unfortunately, these hopes are dashed as the world is finding to its horror that a new force has started destroying signs of heritage even on a much greater scale. 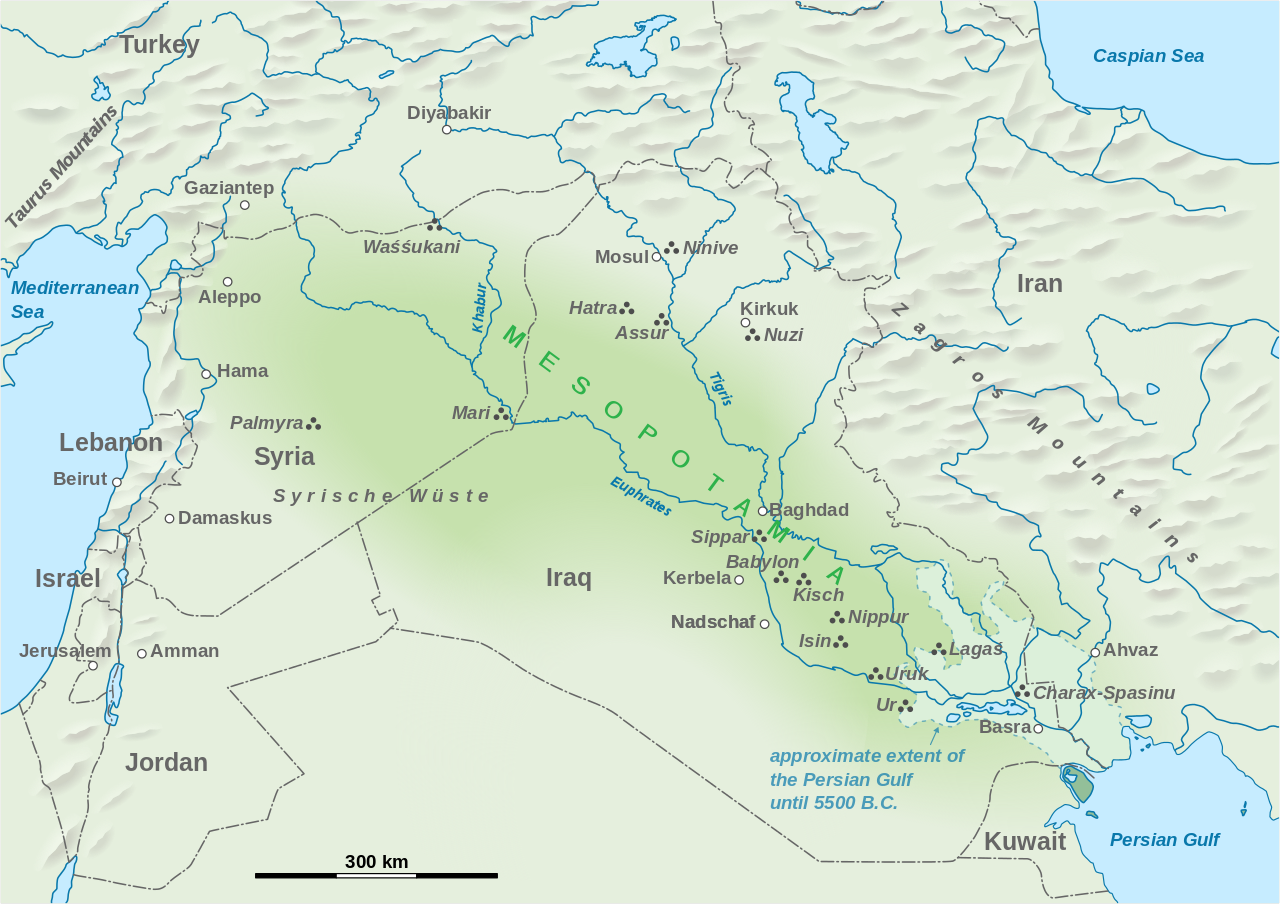 Ancient Mesopotamia is often considered as the cradle of western civilization. It is the name given to the area of the Tigris–Euphrates river system in the middle east. The present boundaries of modern-day Iraq, Kuwait, the northeastern section of Syria and to a much lesser extent southeastern Turkey and smaller parts of southwestern Iran, were all parts of this land. In Bronze Age, Mesopotamia included Sumer and the Akkadian, Babylonian, and Assyrian empires, all native to the territory of modern-day Iraq.

Around 900 BCE, the ancient kingdom of Assyria, had become a powerful regional power in Mesopotamia. It existed as an independent state for a period of approximately nineteen centuries from c. 2500 BCE to 605 BCE, with 'Assur' as its first capital. The capital was moved to Nimrud in the Ninth century BCE and was continued for next 180 years, before getting finally destroyed in 612 BCE. This city was located on the Tigris River just south of Iraq’s second largest city, Mosul. 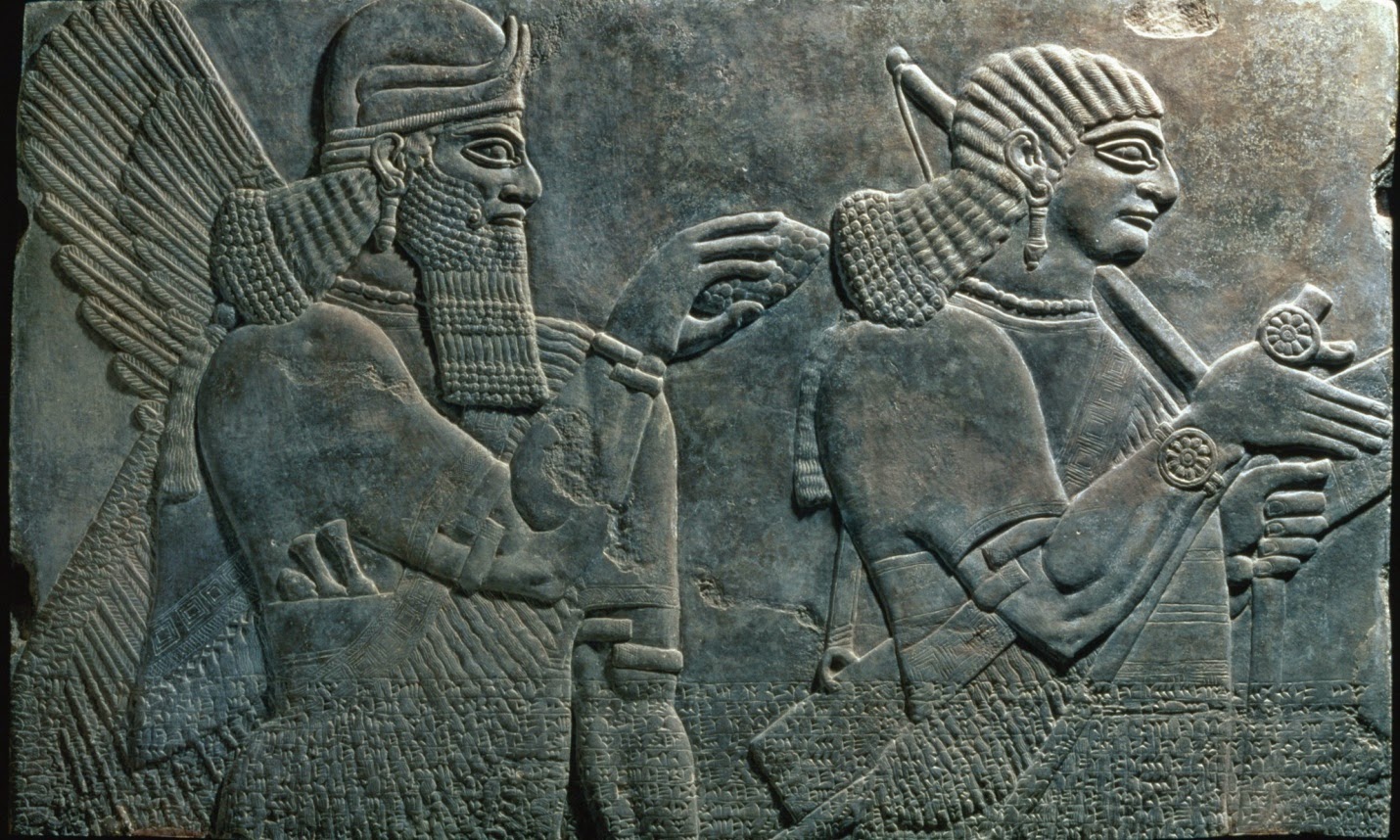 Nimrud was first described by the British traveler Claudius James Rich in 1820. Archaeologists have been excavating sites from the city from 1849 right up to 1989. Excavations have revealed remarkable bas-reliefs, ivories, and sculptures. Statues of kings, colossal winged man-headed lions weighing around 9 tonnes, large number of inscriptions have been discovered here. Temples, palaces and a monument commemorating the king's victorious campaigns of 859–824, also have been discovered. 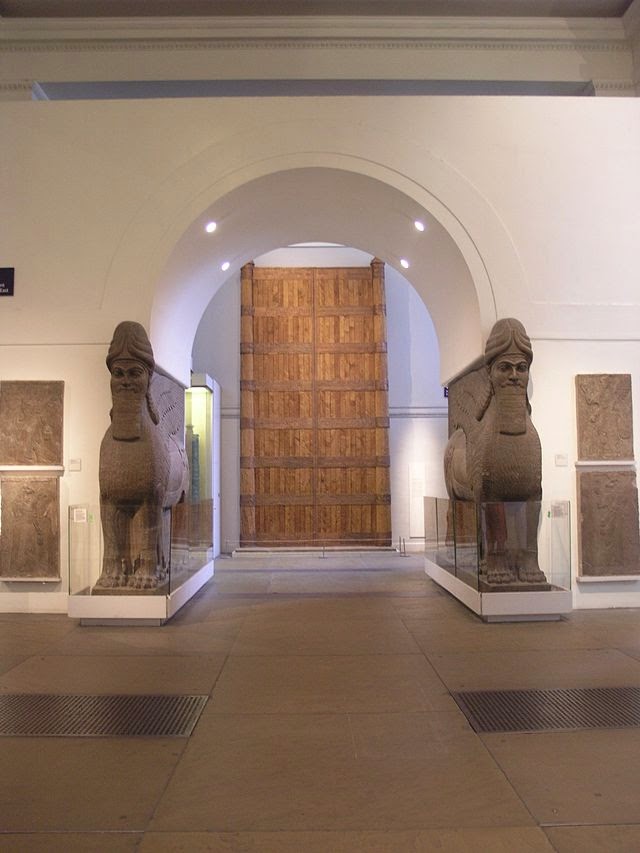 Another remarkable discovery at Nimrud was The "Treasure of Nimrud." It is a collection of 613 pieces of gold jewelry and precious stones. It has survived the confusions and looting after the invasion of Iraq in 2003.Archaeologists were relieved, when the treasures were found hidden in the country’s central Bank in a secret vault-inside-a-vault submerged in sewage water. It was put away for 12 years and was "rediscovered" on June 5, 2003. Readers must have by now got a fair idea about archaeological importance and heritage value of ruins found in Nimrud.

In June 2011, a new development took place that has now shaken the world. This was the rise of ISIS, (sometimes known as ISIL and later renamed simply Islamic State), which is a Jihadist militant group in Iraq and Syria influenced by the Wahhabi movement. It aims to establish a caliphate, or Islamic state in Sunni majority regions of Iraq and Syria. Abu Bakr al-Baghdadi was named its Caliph. As a caliphate, it claims religious, political and military authority over all Muslims worldwide and that "the legality of all emirates, groups, states, and organizations, becomes null by the expansion of the khilāfah's (caliphate's) authority and arrival of its troops to their areas. 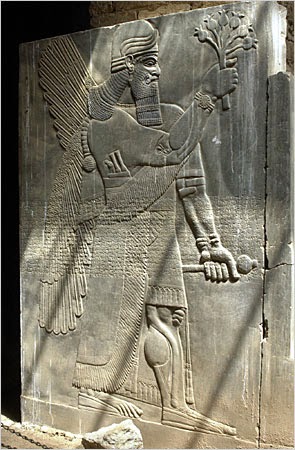 In early 2014, ISIS forces drove the Iraqi government forces out of key western cities in Iraq while in Syria it conquered and conducted ground attacks against both the government forces and rebel factions in the Syrian Civil War. Iraq’s second largest city, Mosul, was captured by the ISIS in June 2014 and are still holding it. 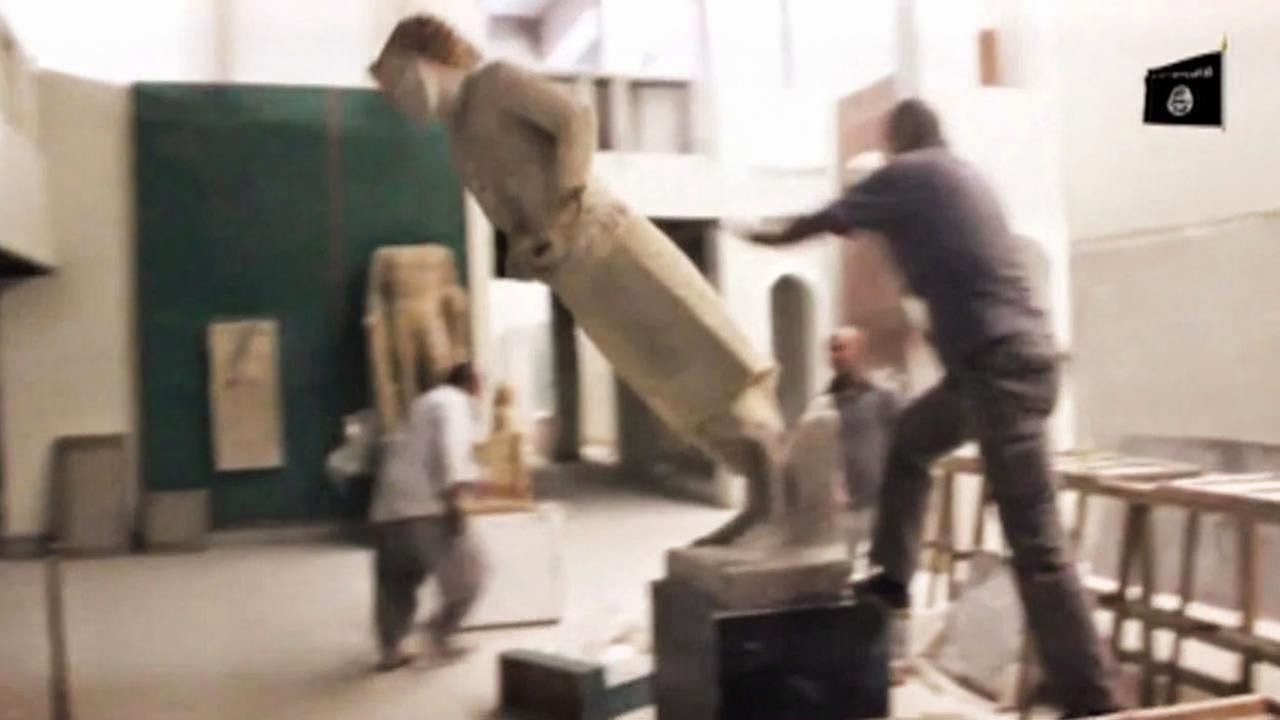 ISIS has been following a policy of the deliberate destruction of a heritage and its images that are found in captured territories. The intention is clear; to erase history and the identity of the people of Iraq, whether in the past or the present.

In 2014, ISIS zealots destroyed the Mosque of the Prophet Younis or Jonah and the Mosque of the Prophet Jirjis, two revered ancient shrines in Mosul. Last week, they released a video that showed militants with sledgehammers destroying ancient artifacts at the Mosul museum. ISIS is belived to be following a policy that art pieces that can be carried away are sold to fund the IS group, while the larger artifacts and sculptures are simply destroyed.

Last week, ISIS has taken the ultimate step to destroy Iraq's history. Militants have actually “bulldozed” the renowned archaeological site of the ancient city of Nimrud in northern Iraq using heavy military vehicles. Iraq’s Ministry of Tourism and Antiquities says that ISIS continues to defy the will of the world and the feelings of humanity. Iraq's prime minister Prime Minister, Haider al-Abadi has described the acts as efforts to destroy the heritage of mankind and Iraq’s civilisation.

There has been a world wide outrage against these acts of vandalism by ISIS zealots. But there is precise little that the world can do except watch helplessly its heritage getting lost. In this respect, I am well reminded of a new policy that is being followed in Afghanistan. A joint Japanese-Afghanistan group has been working since 2004 in Afghanistan. In September 2008 they made significant discoveries near Bamiyan like traces of a Buddhist Vihara, a palace and dozen or more statues. In a surprise move, no more excavations were done by this group. On the contrary, all artifacts, dug out were buried again and all excavated area was covered up so that no clues to buried treasures can be seen. Chief of the UNESCO mission in Afghanistan agrees with this policy. According to him the safest place for these archeological heritage treasures is underground. He says that there are thousands of prehistoric, Buddhist and Islamic sites dotted around the country and policing all of them is an impossible task. Deep below the ground, the relics are protected from endemic looting and illegal smuggling.

The archeologists world over are always very keen to dig and unearth objects and artifacts that can lead us to new traces of history. If any such new find is ever made, anywhere in the world, more resources and manpower is employed to unearth as many objects as possible. These are subsequently studied, new inferences drawn and then the objects and artifacts are carefully preserved in some museum or other. The time has come to change this policy, at least in the middle east and west Asia. After any new archaeological discoveries are made, the artifacts should be studied, documented and then re-buried to protect them from religious hotheads and zealots.