A Tale of three statues 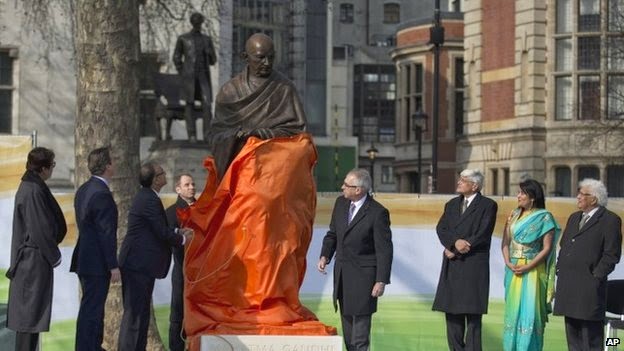 London's Parliament Square is just a mere square of open land at the northwest end of the Palace of Westminster. It features a large open green area in the center with trees to its west. It is however so famous that it has become one of London's main tourist attractions. One of the reasons for this popularity or fame is obviously it's location. It is overlooked by various official buildings: Houses of Parliament to the east, Whitehall to the north, the Supreme Court to the west, and the Westminster Abbey church to the south. Anyone, who is even remotely interested in history, makes it a point to visit Parliament square. The east side of the square, opposite to the entrance to the Palace of Westminster, is a historic place known as a common site of protest against government action or inaction. 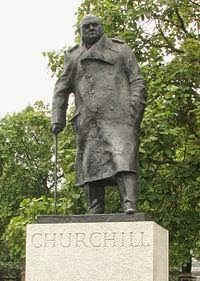 Also stand in the square amongst the greens, statues of personalities from Britain, Commonwealth, and foreign statesmen. To be frank, it is a motley crowd. It includes statues of hard core colonialists like Churchill and Benjamin Disraeli, supporters of racial segregation like Jan Smuts of South Africa and on other hand there are statues of leaders who fought against racial discrimination and slavery like Abraham Lincoln and Nelson Mandela. 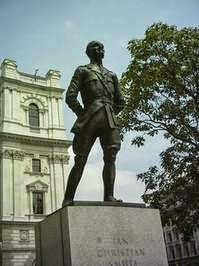 Leaving aside, Churchill's colonial bearings, I always had a great respect for him as he was a true statesman. I made it a point therefore to visit his statue in the Parliament square in Westminster district of central London, in 1975, when I visited England for the first time. This 12 feet tall bronze statue no doubt is very impressive. On the lighter side, it is located exactly on a spot referred to by Churchill himself in 1950's when he had said: "where my statue will go". The statue was unveiled by Churchill's widow, Lady Clementine Spencer-Churchill in 1973, just two years before I had visited it. The unveiling was considered as such a great occasion that it was attended by the serving Prime Minister of UK then and four former Prime Ministers, while Queen Elizabeth II gave a speech.

Last week saw another statue being added to Parliament square. India's finance minister unveiled here a 9ft (2.7m) bronze statue of Mahatma Gandhi in presence of British Prime Minister David Cameron and Gandhi's grandson, Gopalkrishna Gandhi. The unveiling marked the 100 years, since Gandhi returned to India from South Africa to begin his struggle for independence. The statue has been sculptured by a British sculptor, Philip Jackson, who says that he was inspired by photographs of the Mahatma Gandhi outside 10 Downing Street on a visit in 1931 for discussion on civil rights for Indians.

The statue was funded by The Gandhi Statue Memorial Trust, who has a target of raising more than £1m for the work, which has been described as a "magnificent tribute". Surprisingly, the largest donor to the trust is the Indian IT company Infosys, along with its founder Mr. Narayan Muthy. Together they have donated quarter of the target amount. According to the trust website, Infosys has donated 250,000 pounds (Rs 2.3 crore) and N R Narayana Murthy and family 200,000 pounds (Rs 1.9 crore). 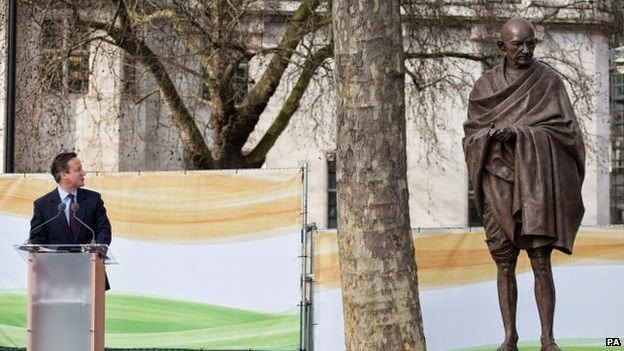 Installing a Gandhi statue in Parliament square is certainly a welcome step, even more so because as British Prime Minister David Cameron said at the occasion: "This statue is a magnificent tribute to one of the most towering figures in the history of world politics and by putting Mahatma Gandhi in this famous square we are giving him an eternal home in our country."

But the iron of the situation is that the statue is in company of others, who were Gandhi's biggest nemeses. Statue of one of his arch-enemies, Sir Winston Churchill, who once had said, he hoped Gandhi would die from fasting and famously and had derided him as a “half-naked fakir” stands almost next door.

In 1893, twenty four year old Gandhi, had started a nonviolent protest campaign for the rights of all Indians in South Africa, after having been thrown off a South African train for being an Indian sitting in a first-class compartment, despite having a first-class ticket. As a result, Gandhi was jailed by Smuts’ government for his campaigning for the rights of downtrodden Indians. The non violent protest had snow balled and had become so effective that General Smuts, who hated this young Indian leader, had to reluctantly agree to cancel the new laws and was forced to free the protesters. Ironically, a statue of this general Smuts also stands in Parliament square.

As an Indian I certainly feel happy that a statue of the Mahatma would now stand in London's Parliament square, but I am more amused to see how history has its own little revenges.