There is a hole in the river! 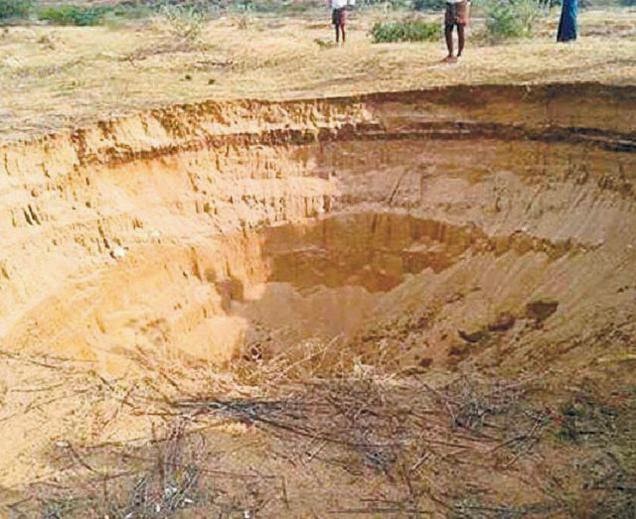 Goddumarri is a small village with a population of 3000, in Yellanur Mandal of Anantapur district in Andhra Pradesh state of India. The village is located on the banks of Chitravati river, a tributary of Pennar river. It is really a seasonal river that comes alive after the monsoons. For rest of the year the river bed remains mostly dry.

Last week, Obula Reddy,a farmer who owns an orchard near the river bed on the outskirts of the Goddumarri village, was standing in his farm. He heard a deafening sound and saw that the ground in the dry river bed was suddenly giving way or sinking. Obula started running away fearing that the hole might pull or drag him in. Later, villages checked the hole in the river bed. It had a depth of 30 feet and a diameter of 25 feet.

What did exactly happen? Was it some totally new and first of its kind phenomenon? The answer to that is NO. This is a naturally occurring geographical phenomenon know as a “Sinkhole.” Wikipedia says that a sinkhole is a depression or hole in the ground caused by some form of collapse of the surface layer. Some are caused by processes like chemical dissolution of carbonate rocks or suffosion processes. Sinkholes may vary in size from 1 to 600 m (3.3 to 2,000 ft) both in diameter and depth, and vary in form from soil-lined bowls to bedrock-edged chasms. Sinkholes may be formed gradually or suddenly, and are found worldwide.

Sinkholes also form from human activity, such as the rare collapse of abandoned mines and salt cavern storage in salt domes. (A salt dome is a type of structural dome formed when a thick bed of evaporite minerals (mainly salt, or halite) found at depth intrudes vertically into surrounding rock strata.) They can also occur from the overpumping and extraction of groundwater and subsurface fluids. Sinkholes can also form when natural water-drainage patterns are changed and new water-diversion systems are developed. Some sinkholes form when the land surface is changed, such as when industrial and runoff-storage ponds are created.

But what did happen at Goddumarri village in the Chitravati river bed? This river originates at Chikkaballapur in Karnataka state and flows through the Kolar district of Karnataka before entering Andhra Pradesh, where it drains the districts of Anantapur and Cuddapah before joining the Pennar. Illegal sand mining is rampant in the Chitravathi basin and this has resulted in severe depletion of groundwater resources in the region. There are number of sweet lime orchards along the bank of the river that depend on groundwater in the riverbed, resulting into a string of agricultural bore wells that bring up a high volume of ground water to surface.

Sinkholes may be formed in a soil if there are rocks of gypsum or dolomite or limestone under ground, which melt in water available in the sub surface channels. This may lead to a sudden collapse of the ground. Near Goddumarri village, limestone occurs at a depth of 250 ft below the surface in the Chitravati river bed. The village lies in perennially drought-prone district of Andhra Pradesh state and there has been a lack of good rains for last six years. This has resulted in almost no recharge of the under ground water table. As a result of the overpumping of ground water, the water table has now depleted to around 750 or 800 ft. The absence of water here is probably causing the cavernous limestone zone collapsing into itself to start developing into a layer.

However scary the formation of the sinkhole might have been for the villagers of Goddumarri, it is just a naturally happening phenomenon. If enough rains come their way next rainy season, the villagers might have some additional water stored for them in the river bed, when the river turns dry. They should however take care and not turn the sinkhole into a giant garbage can, throwing garbage and waste into the sinkhole, because there is a real danger of polluting the river water, when rains come next.