The suit that created a storm 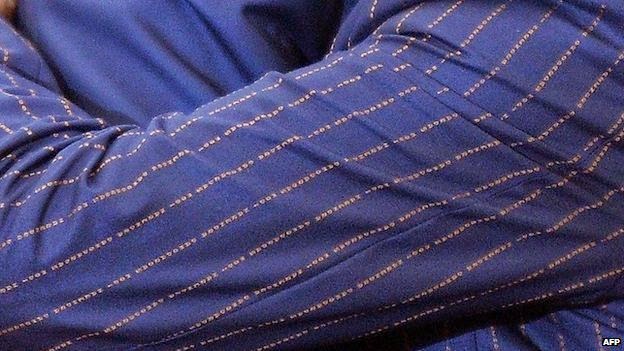 From a distance, it was just an ordinary dark blue Jodhpur style or Bandhagala suit with gold coloured pinstripes. But as TV cameras took up close up shots of India's prime minister, who was wearing this suit, offering tea to US president in a special pendol erected for the occasion on the lush green lawns of palatial Hyderabad House, the viewers could see that they were no ordinary pinstripes. Each pinstripe actually consisted of alphabets written in a vertical line. On closer look, it was clear that prime minister' full name was actually written in a vertical line, that looked like a pinstripe. Without any doubt the suit was exclusive and something extraordinary, though not something that was done for the first time; in March 2011 former Egyptian President Hosni Mubarak was photographed in a similar suit.

There was immediate speculation in media about the cost of this kind of exclusive garment with someone coming up with a figure of 1 million Rupees. Ordinary Indians just viewed the suit with awe and wonder but for the media and opposition parties it was a ready fodder to hammer the Government and the Prime minister and truly he was slammed by his political opponents for wearing such an expensive suit. A Senior opposition called the PM a "megalomaniac" for wearing such a suit, and others accused the prime minister of being "self-obsessed" and "narcissistic".

Very little of this ruckus would have touched the imagination of a Gujarat businessman Rameshkumar Bhikabhai, who had presented this suit to the prime minister during January 2015. Bhikabhai was in embarrassment and pain as he explained how he came about giving this present to the PM, with whom he has a friendship for last 40 years and considers him as his elder brother. Explaining his stand he said:

"I am from Gujarat. I presented this suit to him ,when I attended the recent Vibrant Gujarat Summit. I gave it while extending an invitation to him to attend my son's wedding on January 26. I gave this gift to my elder brother on behalf of my son. ( In India it is a tradition to present new clothes to all your close relatives for wearing in a marriage) My son had this idea of making this monogrammed suit. He said he wanted to give a surprise to him. The price of Rs. 1 million quoted for the suit is not the correct price. My son does not have the guts to spend that kind of money.”

Bhikabhai also clarified that the PM had told him there itself, that he would wear the suit on the marriage day of his son and then give it away in charity. His son's marriage happened to be on January 26th, when by coincidence, US president was visiting India.

In India, there is a strict code of conduct for ministers issued by the home ministry, that clearly restrains both Union and state ministers from accepting a valuable gift unless it is from a close relative. The code stipulates that;

The clause 4.2 of the code says that a minister may receive gifts during his visits abroad or from foreign dignitaries in India. Such gifts fall into two categories. The first include gifts that are of symbolic nature, like a sword of honour or ceremonial robes, which can be retained by the minister. However, the second category of gifts, which are non-symbolic, may be retained only if their value is less than Rs 5,000. Gifts of a higher value must be deposited in the Toshakhana (government storehouse) or purchased by the recipient by paying the difference between value of the item as assessed by Toshakhana and Rs 5,000. Only household gifts retained by Toshakhana such as carpets, paintings, furniture exceeding Rs 5,000 are kept in Rashtrapati Bhavan, Prime Minister's House or Raj Bhavan as State property.

It is better to leave the matter to legal pundits to find out whether accepting a garment falls in any of the above categories or not, let us move on to something that has turned out to be even more news worthy. 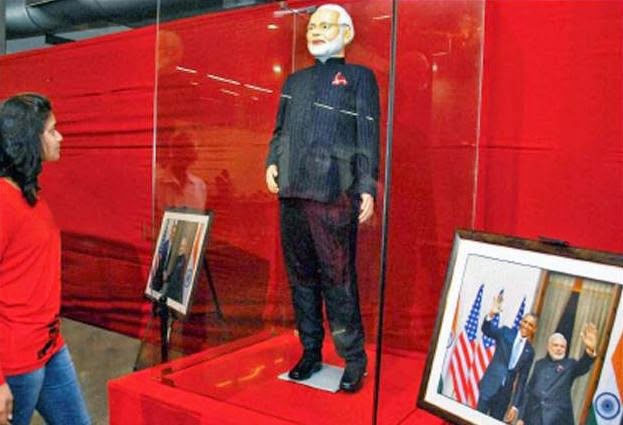 The prime minister handed over the suit along with 450 other gifts received by him during last nine months to municipality of Surat city in Gujarat state for being disposed of in an auction, which began on 18th January 2015 and would continue for 3 days. This city, famous for its diamond industry, is known to be wealthy.

The suit surprisingly has received bids in the range of Rs. 12.5 to 14 Million from rich merchants of Gujarat. The total proceeds from the auction would go in the Prime Minister's ambitious 'Clean Ganga Mission'. The opposition parties however remain unconvinced and say that this has nothing to do with Ganga river cleaning. It is a “Damage Control Public Relations” because of criticism by them.