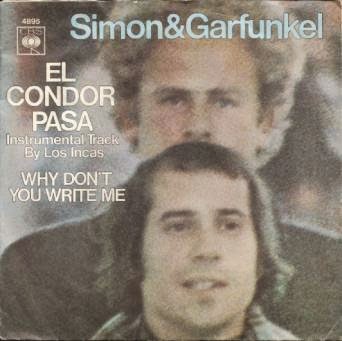 El Cóndor Pasa (If I Could) is an orchestral musical piece written in 1913, based on traditional Andean folk tunes of Peru by the Peruvian composer Daniel Alomía Robles. Simon & Garfunkel performed it in 1970 for their album “Bridge over Troubled Water” after adding some lyrics in English.

In 2004, Peru declared this song as part of the national cultural heritage.

If you can not see the embedded video on your android devices, here is the link. http://youtu.be/pey29CLID3I You can also copy and paste the link in your You Tube App. If that also does not work, search You tube, El Cóndor Pasa, Simon & Garfunkel,