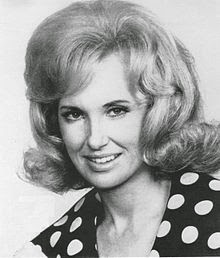 Tammy Wynette (1942 – 1998) was an American country music singer-songwriter and one of country music's best-known artists and biggest-selling female singers. She was a country music icon.
This week, we have a song, "Stand by Your Man," originally recorded by Wynette and released as a single in the United States in September 1968. The song reached number one on the U.S. country charts in late 1968 for three weeks. It also crossed over to the U.S. pop charts, peaking at number nineteen.. It reached number one in the UK Singles Chart when the record was finally released in Britain in 1975, subsequently also reaching number one in the Netherlands.
Enjoy

If you can not see the embedded video on your android devices, here is the link. http://youtu.be/bV6tKIuPHe8 You can also copy and paste the link in your You Tube App. If that also does not work, search You tube, Stand by your man, Tammy Wynette.