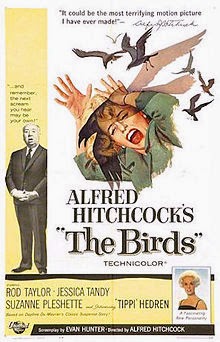 Remember the 1963 suspense/horror film directed by Alfred Hitchcock “The Birds.”? I have always thought it to be one of Hitchcock's best films. This film was actually based on a story by master storyteller Daphne du Maurier in 1952 with the same name. The plot of the film takes place in an hypothetical town; Bodega bay in California, which is, suddenly and for unexplained reasons, the subject of a series of widespread and violent bird attacks over the course of a few days. I can still remember the last scene from the film in which the main characters try to take a little girl to hospital; injured in a bird attack as a sea of birds ripple menacingly fly around their house. The radio reports the spread of bird attacks to nearby communities, and suggests that the National Guard may be required to intervene because civil authorities are unable to combat the inexplicable attacks. The film ends on an ambiguous note, as the car carrying main characters slowly makes its way through a landscape in which thousands of birds are perching.

Dozens of residents in the peaceful town of Purmerend, about 10 miles north of Dutch city of Amsterdam, have been injured in bird attacks, very much reminiscent of the Hitchcock film. In recent weeks there has been a scare in French capital Paris about possibility of aerial terror attacks from drones flying in skies over Paris at night, but for this town, the attacks are real and are being made by a large bird.

For last three weeks, a large bird known as European eagle owl (Bubo Bubo) has been silently swooping down on unsuspecting residents of this town and attacking them at nights. This bird, known as the most feared hunter of the night, comes down so silently that the victim does not hear him at all before he strikes. The attack is usually bloody because its claws are razor-sharp. The European eagle owl is one of the largest owl species, with a wing-span of up to 1.80 metres (almost six feet) and weighing up to three kilos (seven pounds). 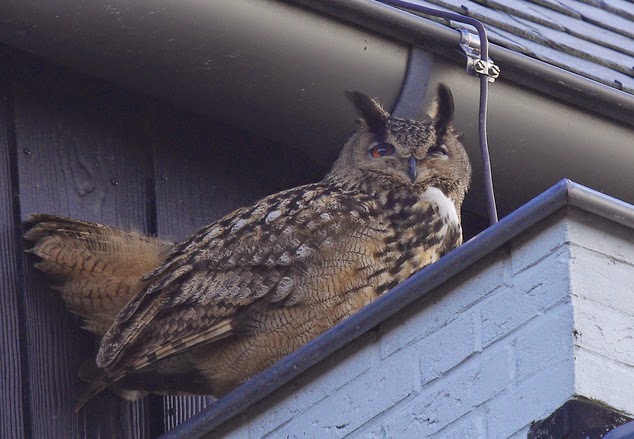 In a latest attack this week two members of a local athletics club were attacked, with one runner requiring stitches for six head wounds caused by the nocturnal bird of prey’s talons. The club has cancelled all training until further notice. Earlier, the bird has carried out at least 15 attacks on residents and workers at Prinsenstichting home for the handicapped, who have so much terrified that they do not want to venture outside in night times.

The owl has injured so far dozens of residents of this northern Dutch town of Purmerend. The town city council has advised residents to take up umbrellas against vigilante owls and venture out at night armed with umbrellas, helmets and hats. It also says that it is trying to find a solution. According to a report in the Dutch English-language news site NL Times, "The municipality plans to apply for an exemption from the province so that the bird can be caught and released somewhere else."

Mr. Gejo Wassink of the Netherlands' OWN owl foundation has tried to give an explanation of this strange and unusual behaviour of this bird, which appears to be a female. He says; " 'Either the owl was reared in captivity and released into the wild and now associates humans with food — meaning it's not really 'attacking' people or it may have heightened hormone levels as the breeding season starts, which influences its behaviour and makes it defend its territory.” 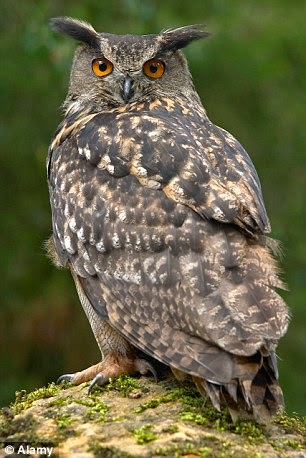 Meanwhile, Dailymail of UK has reported on its web site that a bird of the same breed has attacked and has broken the arm of a 70 year old woman living in Wotton-under-Edge in Gloucestershire, England. She saw this bird and tried to photograph him perched on a lamppost and hooting. Because the bird was so noisy, she went outside and shone her torch on bird's enormous brown eyes. The owl did not like that and drew his wings up and straight flew towards her. She tried to run back to her house but while dodging the bird,she tripped and fractured her right forearm as she broke her fall.

Back to Purmerend, where its citizens are hoping that the city will soon catch this rogue bird. The main problem appears to be that the European eagle owl is a protected species that requires special permission to be trapped. City council says that they want to catch the owl as city’s residents are in danger, but The procedures can still take some time. They have therefore advising people to stay away from the owl and advice the night strollers in the area to shield themselves with umbrellas.