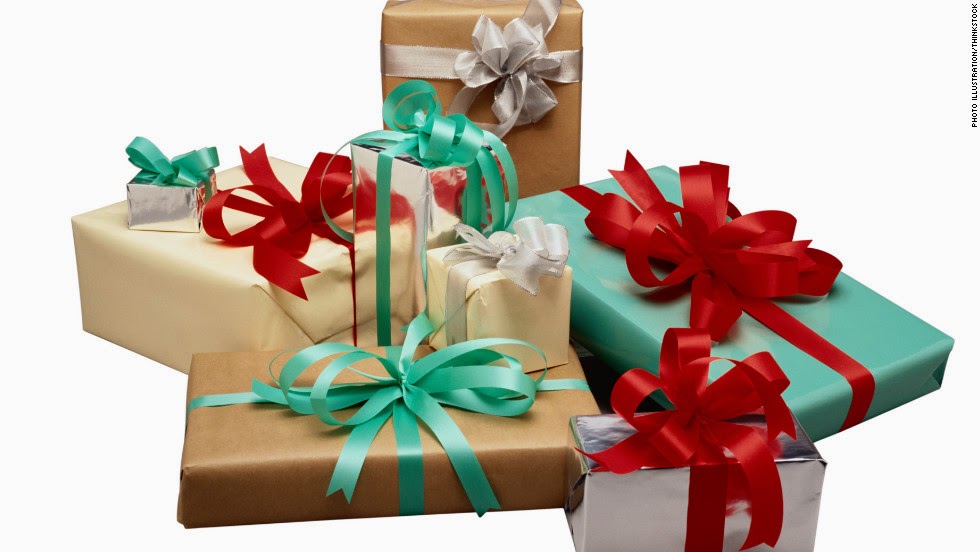 If there is a serious drawback in me, it is my inability to think of apt or proper presents to give to people around. This was much highlighted a week ago, when I had to be present for a function organized for welcoming a new baby in a family. When I had discussed this issue of giving presents on this occasion with my wife earlier, my suggestions and choices were rather limited to clothes for proud grandparents and  a sort off pretty and lacy dress for the baby girl. As happens usually, my suggestions were immediately labeled as lacking depth of thought and dumped. I was much relieved when my wife took the responsibility of choosing the gift upon herself. She bought a beautiful embroidered bed cover as a gift for the grand parents and a pair of glittering tiny earrings for the baby girl. The gifts were really nice and suited the occasion and most important of all, perfectly fitted in our budget.

I have seen that unlike me, some people can always think of perfect gifts which fit in the budget. I think, I face a mental block, whenever I have to think of a present. Luckily for me, the new trend for the hosts is to request their guests not to bring any gifts, not even flowers. This really solves my perpetual difficulty.

But I must tell you that life was never that simple in the past, as people hosting some or other functions expected presents from the guests and the guests also expected some kind of return gifts. In the end both used to feel unsatisfied and unhappy for having been cheated in this gift exchange.

This entire gift exchange racket however still continues for some events like birthdays of kids. The kids naturally expect gifts on their birthdays from everyone; their parents, grandparents and guests attending the birthday bash. They feel immensely overjoyed after receiving a toy or even a pencil set. The guest kids also are happy with any return gifts, erasers, pencils, key chains, chocolates. There is no unhappiness or feeling of cheating at all. This comes up  as one grows up.

Forty or fifty years ago, for events like marriages, every host expected that each and every guest would bring some kind of gift or at least give some cash in an envelope. I always preferred this cash route, because I could give exactly, what I could afford at that time. There used to be some highly popular common gift items like glass lemon sets ( a set consisting of a glass jug along with six glasses), small artifacts or figurines made from sandal wood. It was not uncommon to receive dozens of lemon sets and sandal wood items in a marriage. I remember a particular sandal wood artifact; an elephant pulling heaps of wooden logs chained together, so commonly presented, that every household would have at least one in their show case. Most of the gifts received would to be useless. It was therefore a common practice to store the gifts,  just as they were received; in wrapped condition, and then pass them off as gifts to someone else. It used to be just recycling of gifts.

As per Indian traditions, in a marriage ceremony, near relatives of the bride and the groom are considered as “honoured” guests even today and it is expected that the other side would honour them with befitting gifts. If the gifts given by both sides do not compare well or not approved by these so called honourable guests, much heartburn and sourness is caused. Things have changed now as giving gifts to their near relatives is also now being handled by the bride's or groom's parents themselves, instead of expecting from the other side.

In case of poorer classes, this gift giving business was weirdly funny as they followed stricter protocol during marriage functions regarding gifts. I have seen and heard the gifts or cash received, along with name of the guest, being announced on a public address system at some marriage functions. Things would go haywire if some guest was found to have come without a gift as his name would be announced with a specific mention that he did not give any present to sort of humiliate him.

May be because of this feeling of sourness amongst relatives and also the recycling trend, people were fed up and a trend started telling guests prior to marriage functions, not to bring any gifts. These days, at a marriage or any other function, we just go to meet the hosts, have dinner and come back. The changes obviously suit me, because I do not have to subject myself to horror of thinking or selecting presents.  But there are occasions like Marriages, engagements, birthdays within the family, where you can not avoid giving presents. It is here that the real problem starts because of the reciprocity expectations. I find myself at terrible loss here, because I never remember what someone had gifted me earlier and what I was expected to give now.

In western countries, I believe that there is a system under which a soon to marry couple or an expectant mother registers at a store, her needs. The people, who want to give gifts, choose things from this list, that fit in their budget. System is nice but I am doubtful, whether it would eliminate the heartburn caused by reciprocity expectations.

Some people, especially ladies, love shopping for things to be given as gifts, but it is not certain that the recipient would like them and chances are that the thing may just lie in the house catching dust or may be exchanged to someone else. The problem today is that most of things a person desires to have, are very expensive and no one can afford to give them as gifts. That is why I prefer to give cash as a gift, which the recipient may spend on anything that he/ she wants.

Giving presents is a pain in the neck, won't you agree?