Agni V blasts off successfully from a canister 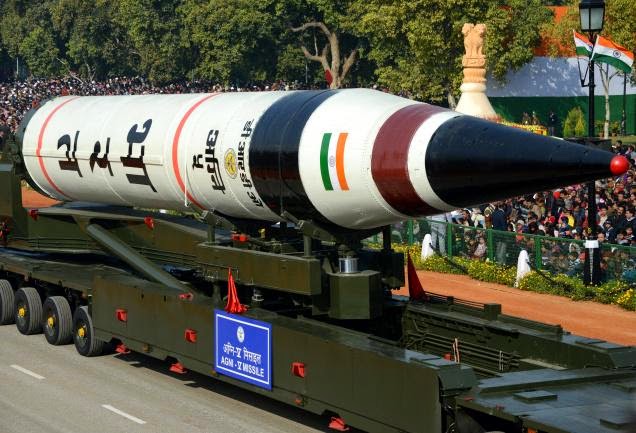 Last week, India's most powerful strategic Inter- Continental ballistic missile Agni V, was successfully fired from a hermetically sealed canister mounted on a TATRA truck stationed on the Wheeler Island off Odisha state of India. This is the third successful launch of the missile, yet it is sort of its first launch from a mobile launching platform. Success of this test means that the missile can now be launched even from a roadside. Agni-V would be the deadliest of India's missiles as it can carry a 1.1 tonne nuclear warhead over a distance of 5000 Km or more.

India is hardly a war mongering country. People are peaceful by nature. Many Indians and in particular foreigners are therefore naturally curious to know about the need of India for such an missile? Answer to that is very simple, India has two neighbours on its west and east, who are ruled by hostile regimes, who keep on creating trouble on India's borders. This means that India must have a strongest deterrent that would restrain these two from raking up any major trouble as they have done in past. What better way is there for deterrence, than having a nuclear tipped missile ready with us that can hit even remotest corners of our hostile neighbours? 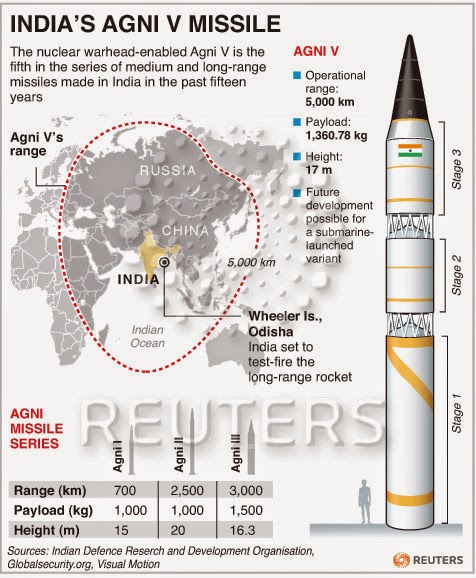 So what Agni-5 can do? The Agni-V is the most advanced version of the indigenously built Agni ( Fire), series, part of a programme that started in the 1960s. First tested in April 2012, it is mostly domestically built and has a range of about 5,000 km (3,100 miles). This means that it can even reach Beijing in China and much of Europe.

What is a canister launch and how different it is from a launch-pad launch? In a canister launch, missile is lifted up from ground without firing its rocket engines by means of the thrust of compressed gas generated by a gas generator at the bottom of the canister. First stage of the rocket fires only after the rocket reaches a height of about 30 meters (more than 90 feet). This launch method ensures safety of personnel on ground, who otherwise would have to be positioned far away from the launch pad. 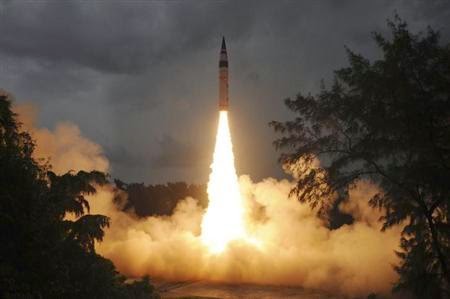 17 meter long Agni-V is a three stage rocket, with engines igniting and lifting the nose cone containing the nuclear war-head one after another to a height of 500 Km. The nose cone then comes down on a ballistic path. It has to withstand searing temperatures of more than 3,000 degrees Celsius before it arrives at pre-designated target. In this week's test, everything went on with clockwork precision. The first stage ignited after 30 meters and later separated. The subsequent two stages also got decoupled, when rocket descended rapidly. After about 20 minutes or so, the nose cone with a dummy payload impacted a pre-designated point in Indian ocean.

The health of the missile during its successful flight was continuously monitored by a network of radars, electro-optical tracking systems and telemetry stations, besides two ships stationed near the impact point monitored the and recorded the terminal event.

The grand success of the flight was perhaps a touching farewell to Mr. Avinash Chander, the architect of Agni-V, who relinquished his office on that very day.

Here is a launch video.

For an individual or a nation, safety has to be its paramount concern. Relevance and necessity of Agni V can therefore never be in doubt. It has to be ready all the time, so all the Indians can sleep peacefully. This week's test has made India little more secure as the missile is expected to be inducted into service in a year after a few more canister trials.