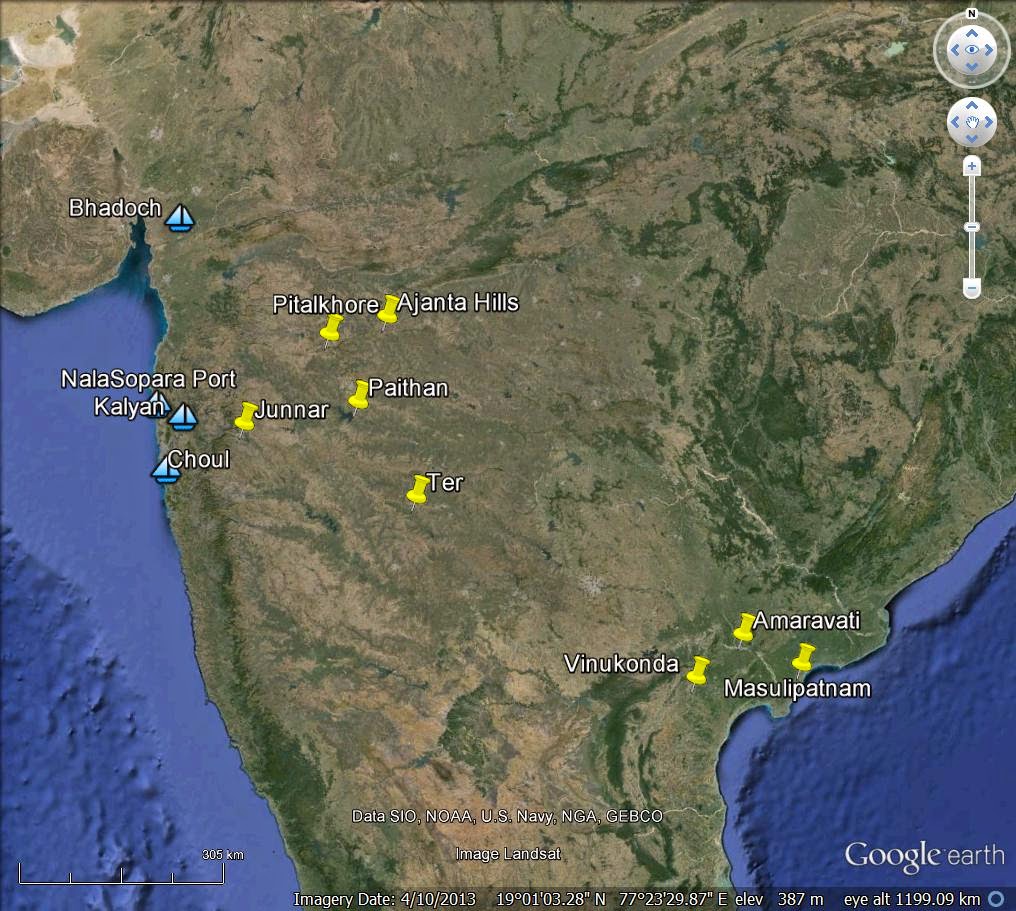 (Continued from part I)

From the historical records, it is evident that “Tagar” was an important trading center, where goods produced on east coast of India were procured and traded with the Greek or Roman traders. Unlike other places on the Satavahana period trade routes, which can be physically identified with the places existing today, “Tagar” remained illusive. Indian archaeologists remained greatly puzzled for more than a century about the identity of this ancient city.

“Tagar” remained an important city for at least thousand more years since the Satavahana days. I quote from J.F Fleet's (a British officer in Indian civil service) article written in Journal of the Royal Asiatic Society, 1901, in which he says;

One of the earliest attempts to identify Tagara with an existing place was made by Francis Wilford in 1787 when he identified Tagara as Devagiri or Daultabad. Hundred years later, J. Burgess in his book, Cave temples of India, published in 1880, mentioned that the present city of Junnar was probably Tagara of the Greek writers. J. F. Fleet, appointed as Assistant Political Agent in Kolhapur state and the Southern Maratha Country in 1875 identified during or after his tenure, “Tagar” with Kolhapur city, also known as “Karaveer.”

In his paper published in 1955, DD Kosambi agreed that the published argument for Junnar; that Tagar is derived from Trigiri and there are three mountains in Junnar, is almost feeble. Nonetheless he agreed with this identification for the simple reason that if Junnar was not the same place as Tagara, it would mean that the Graeco-Roman traders from whose accounts, both the Periplus and Ptolemy drew their main information, did not see it fit to mention the greatest Deccan trade centre of that time; a thought that is rather hard to believe. Samuel Clark Laeuchli in a paper written in 1981, contradicts Kosambi's argument and says that perhaps Junnar was identified in classical documents by some other name like “Omenogara”, and that is why no mention of Junnar is observed in these documents.

It was J.F.fleet again, who suggested in an article written in “ Journal of the Royal Asiatic Society” July 1901 issue, that perhaps a village of present times, known by the name of “Ter” might be identified with ancient “Tagar, “ because of the fact that this village is about 95 miles southeast of Paithan, and agrees substantially with the distance and direction given in the Periplus text. From Bhadoch to Paithan, the actual distance by road, is about 240 miles, and from Paithan to Ter it is 104 miles, being 20 and 9 days' journey of 12 miles per day respectively. This identification of “Tagar” is now more or less universally accepted.

J. F. Fleet, after this identification, requested Henry Cousens, Superintendent, Archaological Survey of India- Artist and Archaological Photographer- to possibly visit the village of “Ter” to ascertain, whether any remains or indications of great age upon the spot to support his identification. Cousens did make a flying visit to the village of “Ter,” located about 48 Km to the east of Barshi town- famous as a cotton collecting centre in Solapur District, in the beginning of November 1901. He was however disappointed that no direct evidence of the identification was found. He could only confirm that it was an ancient site containing early Hindu, jain and Buddhist remains. 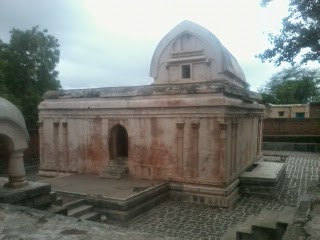 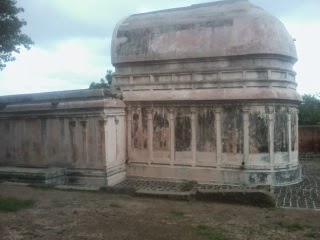 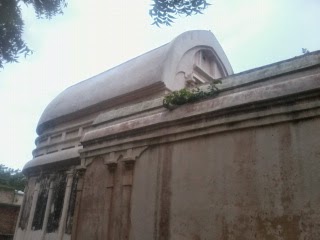 
His trip however did not go waste, as he found right in the middle of the village' a structure that could be called as the earliest structural temple in Western India, originally a Buddhist brick chaitya, later appropriated by the Vaishnavas, for the worship of one of Vishnu's avataras, or incarnations, Trivikrama. 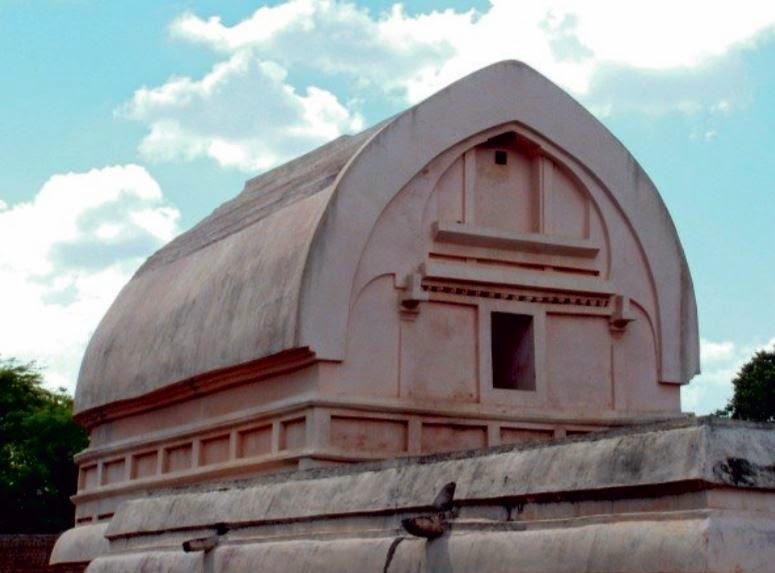 The Trivikrama temple remains today the single most important signpost of its glorious past. It has remained in good condition only because of its conversion to a Hindu temple, which is the primary reason for its perfect preservation.


Cousens describes the structure in these words: 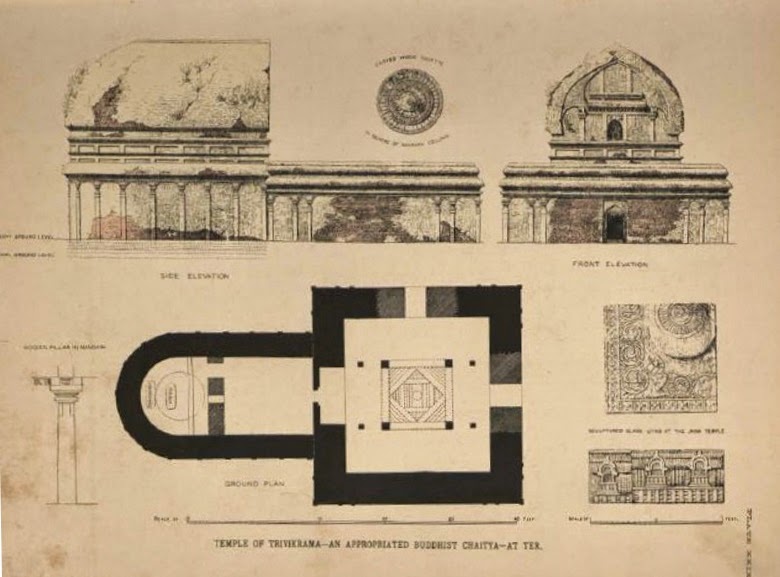 “The building consists of the vaulted chaitya with a flat-roofed hall before it. The former measures 31 feet long by 33 feet high. It is just a plain copy in brick of the rock cut Chaityas, whose wagon -vaulted roof rises to the ridge on the outside and is comnpleted with an apsidal end. The facade above the hall roof is a rough counterpart of that of the rock-cut Vishawakarma cave at Elora, excepting perhaps the little niche holding the Hindu image (idol), which is probably a later addition. There was in all likelihood a small window here to let light into the interior. Heavy mouldings around the base of the walls and the eaves, with slender pilasters between them are the only decoration on the outside walls, over which was a coating of plaster. There are no pillars within the Chaitya, its small size not requiring the lotus ornament upon some of the sculptured stone fragments is very similar to what is found upon the Sanchi Stupa and that which stood at Amaravati near Bezvada (Vijayawada). ”

Another complete give away here is the decoration upon the exterior of both shrine and outer “Mandapa” of heavy roll mouldings, which is known as “Sanchi railing.” Any of the readers who has visited Rock cut temples in Maharashtra, would immediately identify them belonging to the Buddhist Hinayana period.
Cousens' description leaves no doubt in reader's mind at all, that the Trivikram temple structure was definitely a Buddhist structure built much before and later converted into a Hindu temple. In his report he says and I quote;

"Taking all these points into considerations, I do not think we can place the Ter Chaitya later than the fourth century, it is possible it may be much older"

Facade of the arched dome of the  Trivikram temple has surprising resemblance with Chaitya from Hinayan period cut temples like Bhaje. Surely Ter was the best candidate for being the ancient city of Ter.

Cousens also visited another temple in the village, that of “Uttareswara.”The evidence that he found there also augmented the theory of the village having its origins to first few centuries of our era. Excavations carried out later, by ASI, more than adequately proved it that Ter indeed was the ancient Tagar.