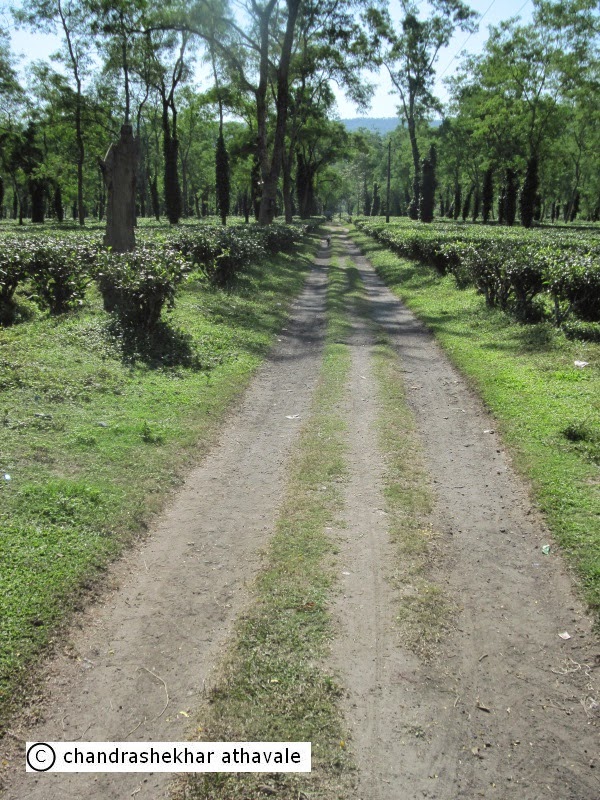 I have a quick breakfast and our car leaves on highway 37 to west, to stop almost immediately near a cluster of shops selling Kaziranga souvenirs; tee shirts, little wooden rhinos and key chains. I buy a couple of tee shirts for the kids at home and a small wooden rhino that can be painted. Our Kaziranga stay may be over, but we have yet to visit an important landmark of Assam, its famed Tea gardens. Assam is the single largest tea-growing region in the world. With 300000 hectors area under tea cultivation, it produces more then 500 million Kgs of tea annually. The low altitude, rich loamy soil conditions, ample rainfall and a unique climate help it to produce some of the finest orthodox leaf teas. In the areas near Kaziranga, tea bushes grow so easily that one can see tea bushes even in yards around homes. 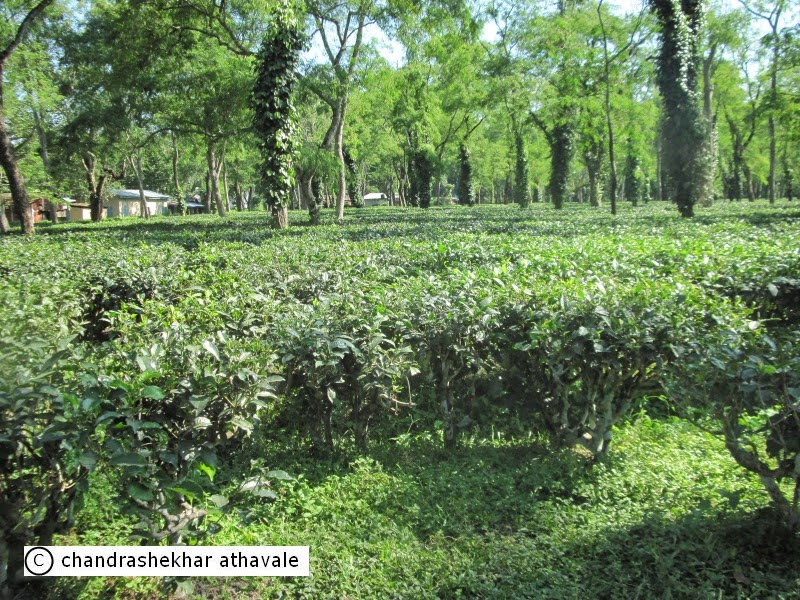 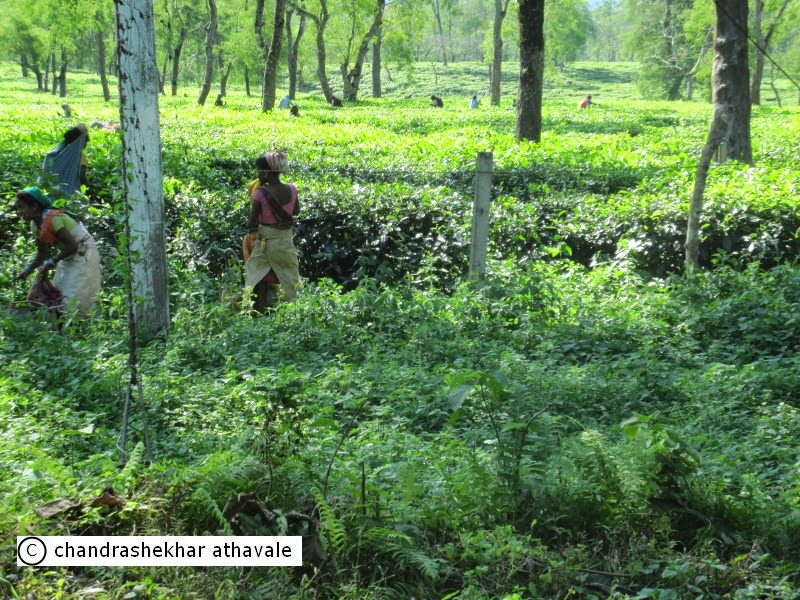 We stop near a tea garden, Amalgated plantations, who have their own retail shop near the entrance. I take a stroll in the garden, which has a jeepable dirt track in the middle, that seems to be going forever. On both sides of the track are neatly planted rows of tea bushes, along with rows of tall trees planted at regular intervals. Black pepper climbers are also cultivated and all the tree trunks are seen studded with the leaves of this climbers. Tea gardens, in a way are monotonous, as they look exactly the same everywhere. I remember someone saying something similar about US villages, looking exactly similar, wherever they may be. 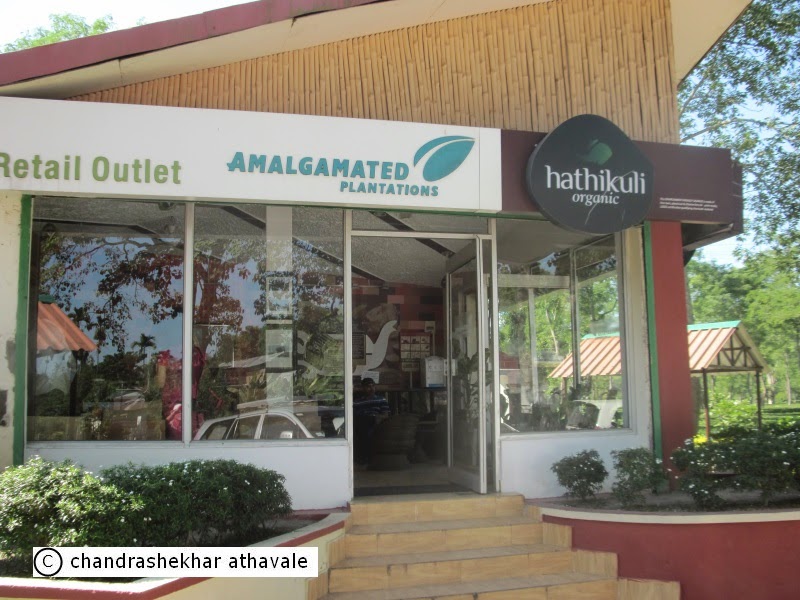 I return to the entrance and buy some teas and tea bags from the retail outlet for gifting and my own use. Asaam tea is known for its rich, deep-amber colour and is famous for its rich, full-bodied cup with a brisk, strong and malty character. Now its time to say good bye finally to Kaziranga and our cars speed along. I see a huge tea factory on my left, where tea leaves are fermented, dried and later packed for the world to consume. On way, we stop for a cup of tea. On each of the tables in this restaurant, I see a bowl full of green chillies and salt. Its a local specialty and diners prefer to eat green chillies along with their food. By early afternoon we reach Guwahati.
I spend rest of the day wandering around in the city markets, where produce from all the seven northeastern states is marketed. Sleep comes easily as I am quite tired by end of the day.

Next morning, after breakfast, we check out and leave for Guwahati's star attraction; the Kamakhya Temple. The temple is located on a hillock known as Nilachal hill in western part of the city. There are supposed to be 10 temples on this hill, but Kamakhya temple is the main one. There is a weird legend about different body parts of a Goddess thrown on earth. The 51 spots, where these body parts fell are known as “Shakti Peeth” or power centers. Kamakhya temple is supposed to be the spot, where genital organs of the Goddess fell.

In the Indian subcontinent, there is a long tradition of people worshiping the male phallus and a woman's body as symbols of divine power of fertility. The people of Indus-Sarswati civilization worshiped female figures as Goddess of fertility. The tradition continued even later during Jorwe-Inamgaon habitats and recently similar idols from around first century CE, were found at Kondapur near Hyderabad. This ancient tradition, later took more sophisticated forms of Shiva-Linga and Goddesses identified with mother Goddesses such as Durga, Kali. Though, a woman's body without head, known as “Lajjagauri” is still worshiped by a few people. In the modern context, male phallus worshiping has taken the common form as God Shiva's worship. However, Kamakhya temple must be the only place left in modern India for female genital organ worshiping now. Everywhere else, the original Goddess of fertility has been substituted by more sophisticated idols of Mother Goddesses like Ambadevi or Mataji. 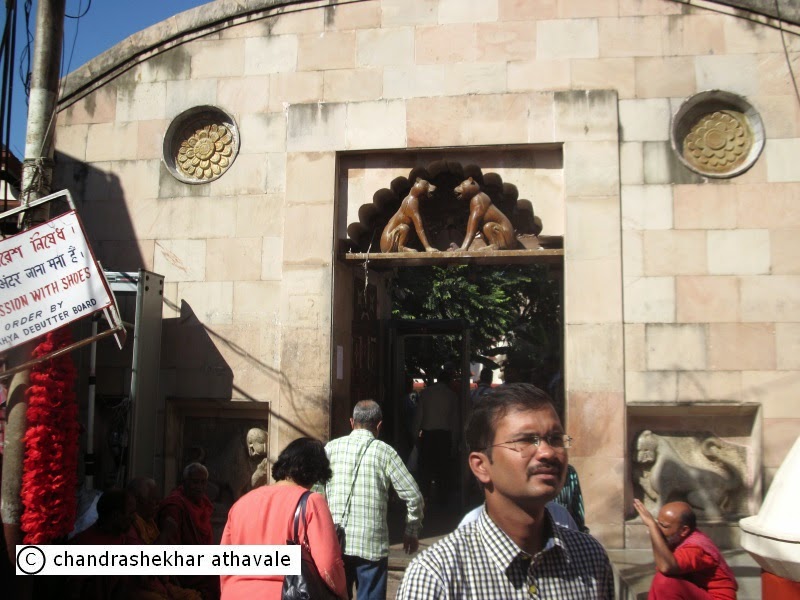 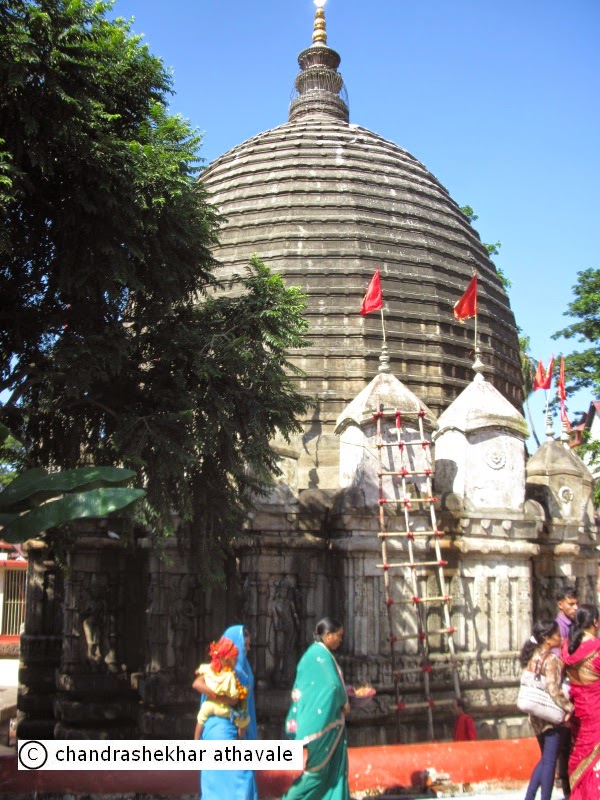 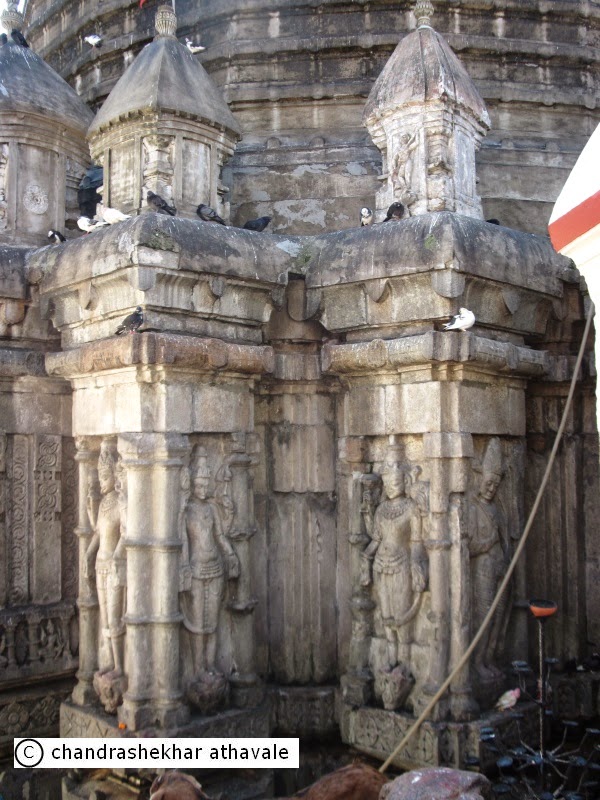 Our cars climb up the hill and drop us near the entrance to the temple. Winding steps paved with stones take me to the entry gate of the temple complex. The gate structure is constructed as a stone wall with a door in the middle. On both sides are two lionesses bas-relief panels in wall recesses. Above the door, in an arch shaped recess, I can see two lionesses facing each other. After entering through the gate, I see a circular pathway around the temple and the back side of the Sanctum Sanctorum. This means that to enter the temple, one has to go round and enter from opposite side. The Sanctum has a cruciform base with adjoining stone pillars touching each other instead of walls. The pillars have recesses in which several bass relief panels are sculptured. Above the sanctum is a hemispherical dome and on top of it, a three stepped pinnacle. A golden “Kalasha” or peak, shines brightly in the morning sun above the pinnacle. The temple has three chambers lined after each other from the sanctum itself in east west direction. 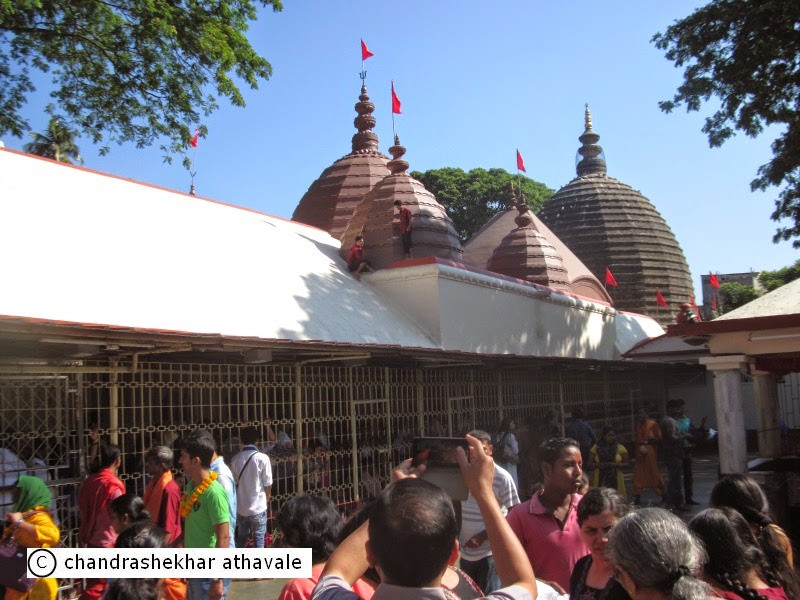 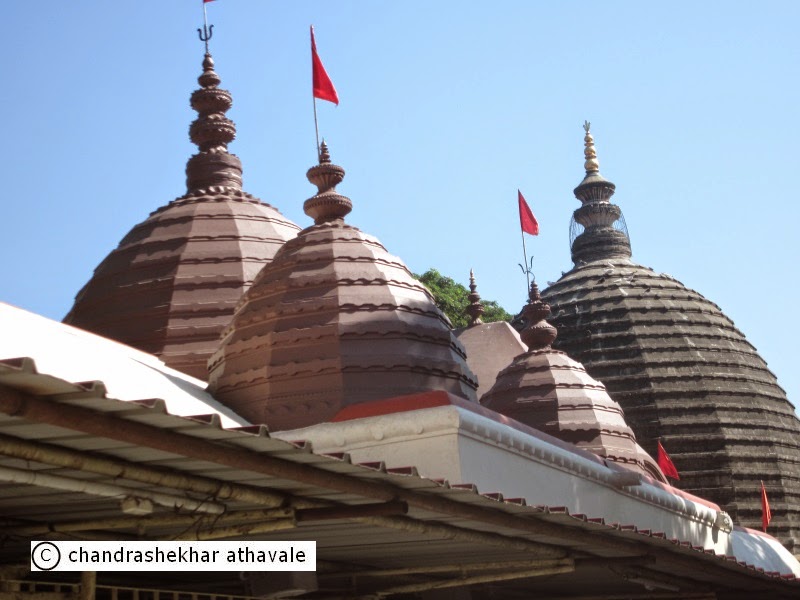 In the easternmost chamber, an idol of the Goddess in a more conventional human form, has been installed for the votaries to worship as the sanctum is cave like and small, dark and reached by narrow steep stone steps. I have a feeling that the original female regenerative organ shaped place of worship may not be very palatable for the modern crowd of votaries, consisting of ladies, families and children and that may be the reason for more conventional Kali Mata alike idol being placed in the outer chamber. 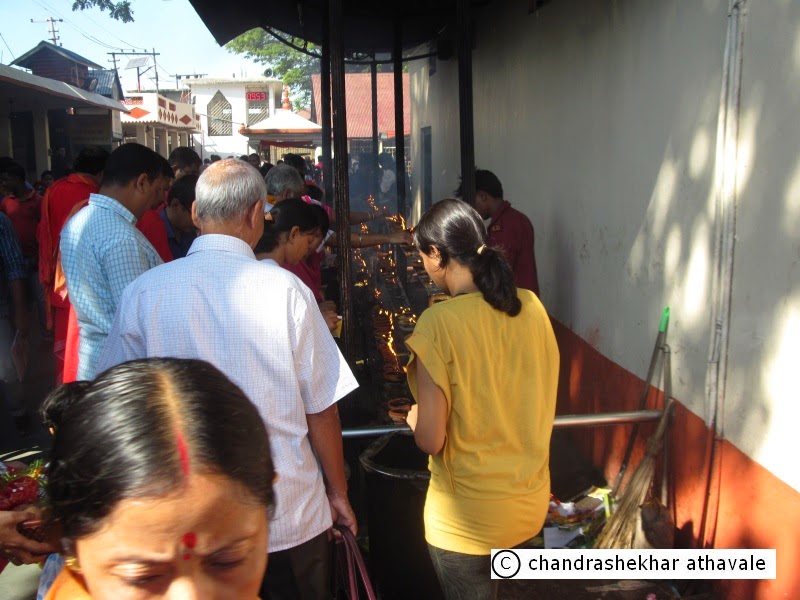 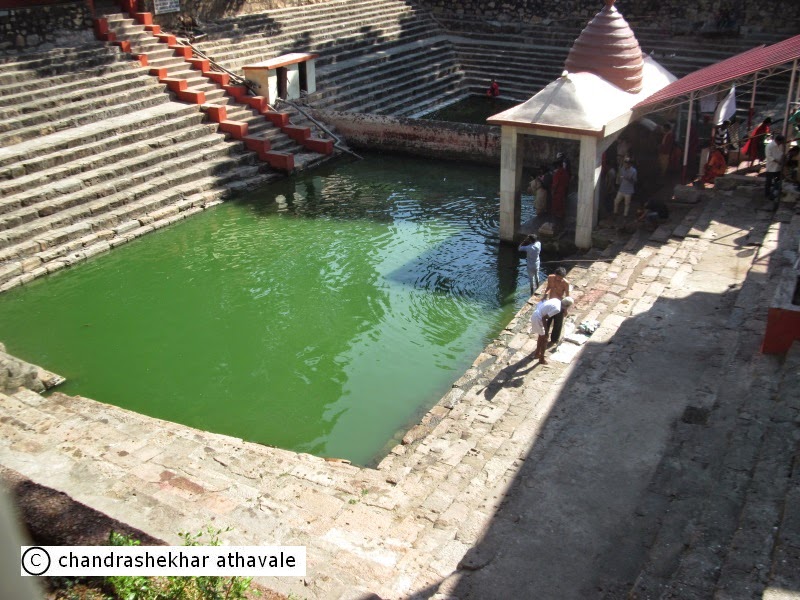 Since I am rather constrained about time, I decide to give up visiting the inner sanctum, as there are long queues of votaries, who want to worship the idol in the inner sanctum. I can see many newly married young couples with ladies wearing gold ornaments and bright yellow sarees.

Wikipedia describes the inner sanctum in these words;

“Inside the garbhagriha cave there is a sheet of stone that slopes downwards from both sides meeting in a yoni-like depression some 10 inches deep. This hallow is constantly filled with water from an underground perennial spring. It is the vulva-shaped depression that is worshiped as the goddess Kamakhya herself and considered as most important pitha (abode) of the Devi.”

To the west of the outer chamber, is a place where animal and bird sacrifices are still carried out. I see a water buffalo, goats, some chicken and doves. I do not know whether these have been brought for sale or brought in by some votary. On one side wall is a shed where devotees light oil lamps, which I feel is clearly a Buddhist influence, because such oil lamp lighting sheds are not seen in temples in other places in India. 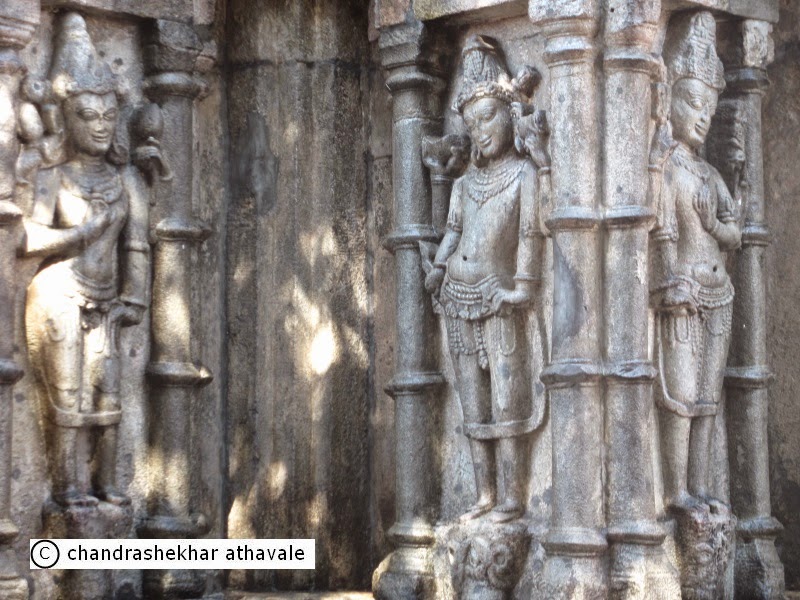 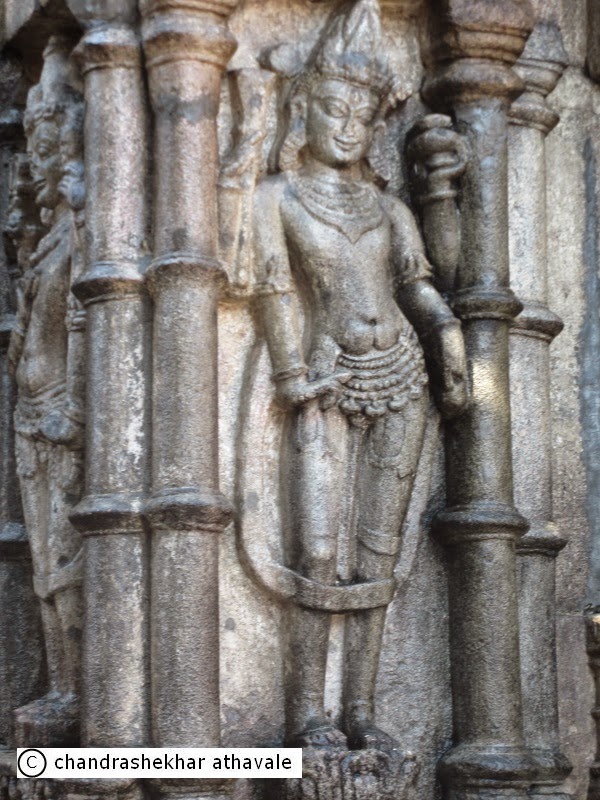 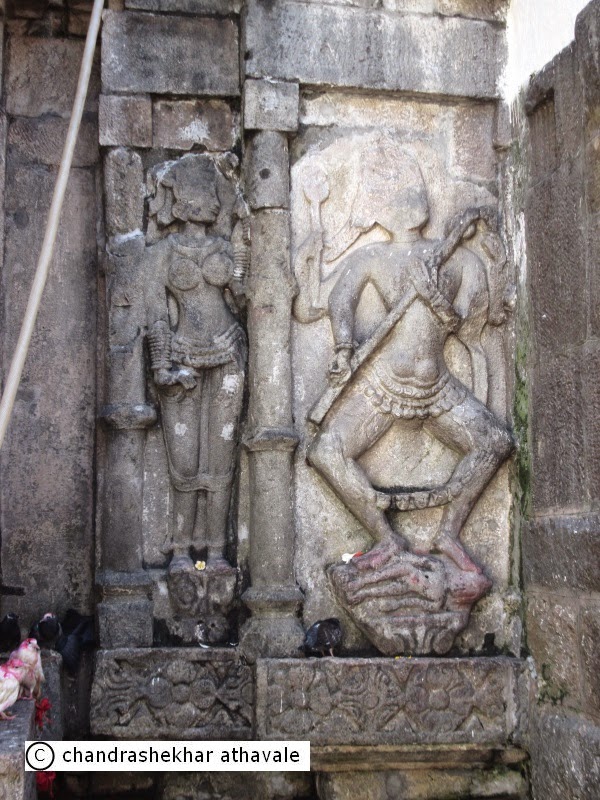 I take a round to see the bas-relief panels on the walls of Sanctum. Most of them are of Shiva with a few depicting his wife Uma or Gauri. Shiva is shown with four hands, holding various objects such as a trident that are attributed to him. On the friezes there are several female figures shown worshiping, inter-spaced with lotus symbols. There is also a museum but it mostly consists of butchering knives, besides some old broken stone fragments. 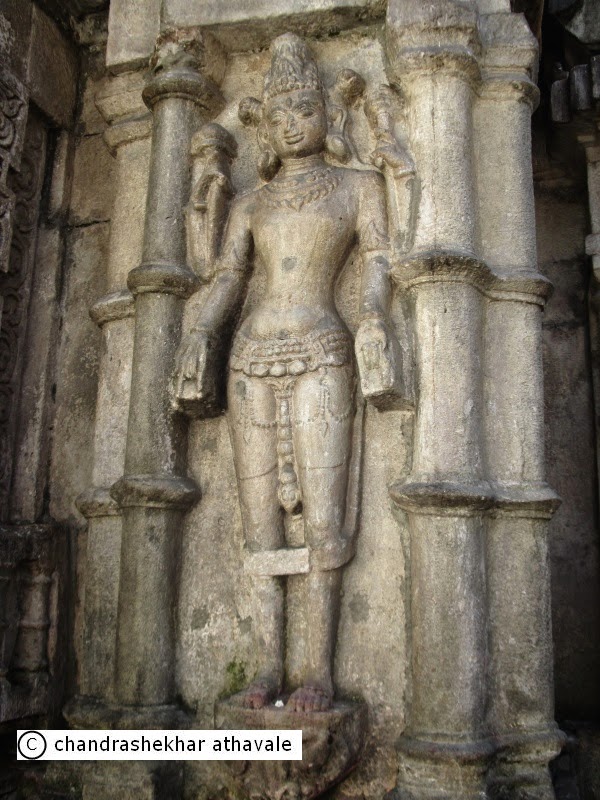 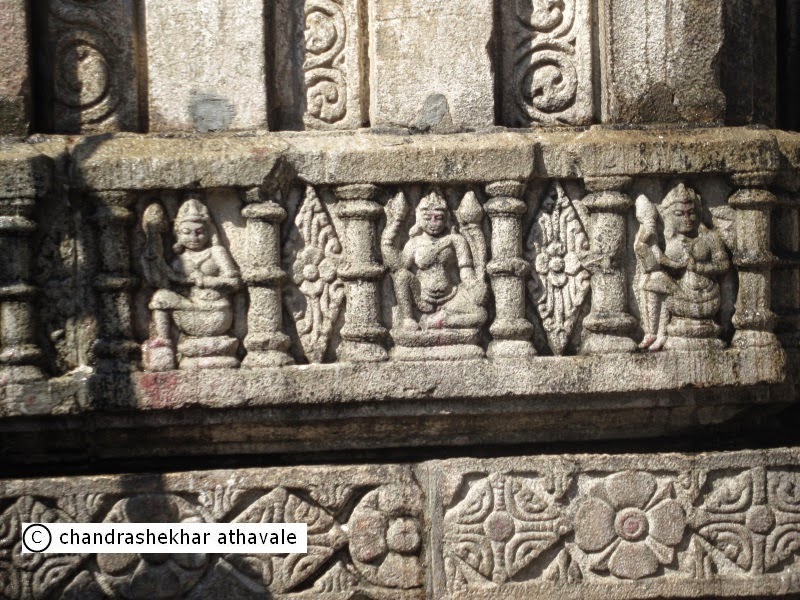 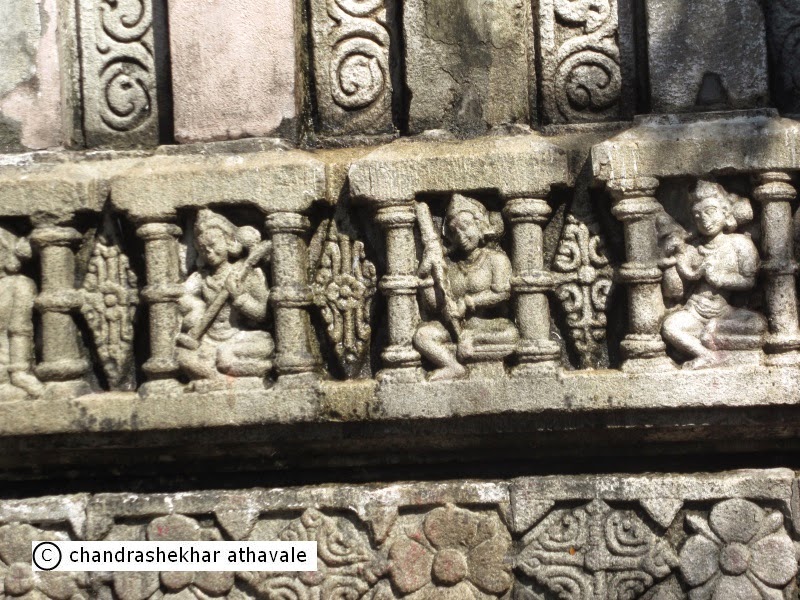 I walk back to the car, the authorities have provided an over bridge which directly connects to the parking area. As we speed towards the airport, I realise that our northeast tour is coming to an end. For last 12 days, I was so busy travelling but now there is an emptiness in my mind. True! that the experience has been so richly fulfilling, so wonderful, that memories are going to stay with me forever. Northeast is just wonderful, a traveller's heaven.