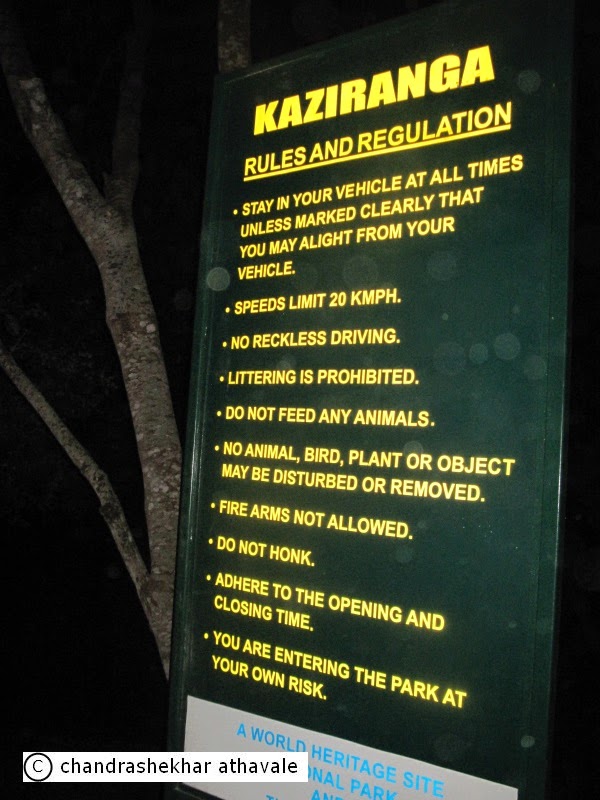 We leave the resort very early, even before dawn, so as to reach Kaziranga park entrance in time for our Elephant safari. Kaziranga park has been divided in four different ranges; Western or Baguri range, central or Kohora range, eastern or Agoratoli range and finally the distant Burapahar range. The park has several entry points. However, we enter through a gate in Kohora range, which is almost across the road from the resort, where we stayed last night. There is a barricade and the cars stop before that. We move on through a small gate on a side and walk for about 50 meters or so. On our left, seen faintly in darkness, is an elevated structure with a staircase, from where we would be mounting the elephants. 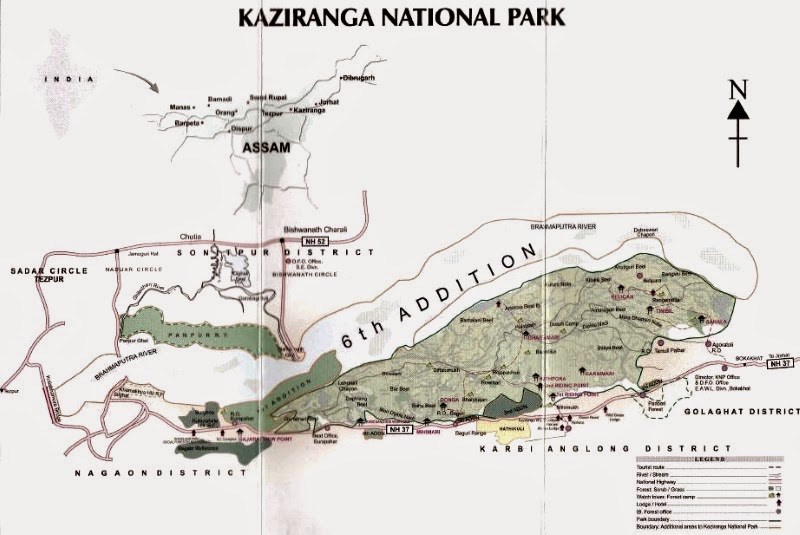 Kaziranga park is huge; approximately 40 km in length from east to west, and up to 13 km in breadth from north to south. It covers an area of 378 sq Km. Approximately 51.14 sq. Km was lost to erosion in recent years. To make up, a total addition of 429 sq. Km area was made along the present boundary of the park and designated with separate national park status to provide extended habitat for increasing the population of wildlife or, as a corridor for safe movement of animals to Karbi Anglong Hills, during flood season. Kaziranga has flat expanses of fertile, alluvial soil formed by erosion and silt deposition by the Brahmaputra. The landscape consists of exposed sandbars, riverine flood-formed lakes, known as beels, (which make up 5% of the surface area), and elevated regions known as, chapories, which provide retreats and shelter for animals during floods. During months of June to September kaziranga gets rainfall of 2,220 mm. During the peak months of July and August, three-fourths of the western region of the park is submerged, due to the rising water level of the Brahmaputra. The flooding causes most animals to migrate to elevated and forested regions outside the southern border of the park, such as the Karbi Hills. 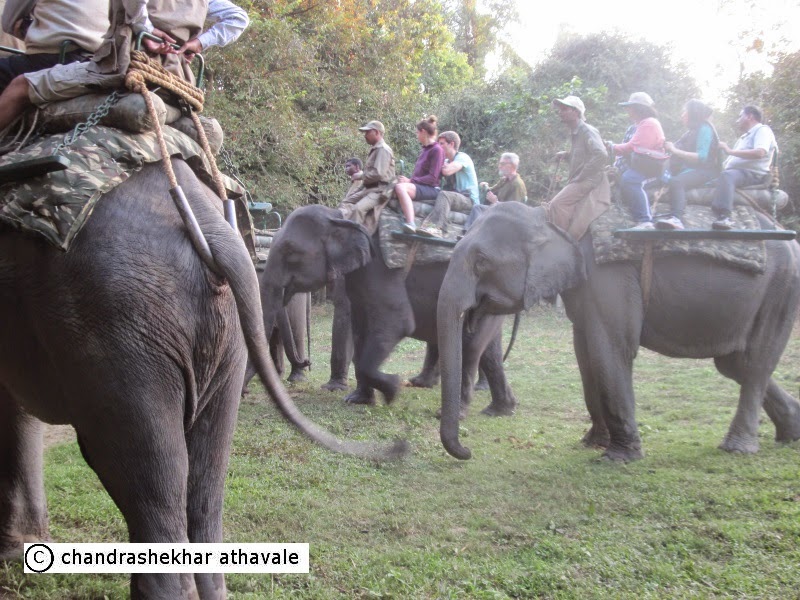 As dawn arrives, Kaziranga gets transferred from a dark dangerous world to a 'pleasure for eye' land with  plethora of mini water ponds and fields with tall elephant grasses, swaying in the wind. I climb the stair case to mount an elephant. There are two types of elephant rides available, one where you can sit with legs spread across like a motor cycle ride or the other where you can sit sideways. First one is better for viewing the animals and I select that. 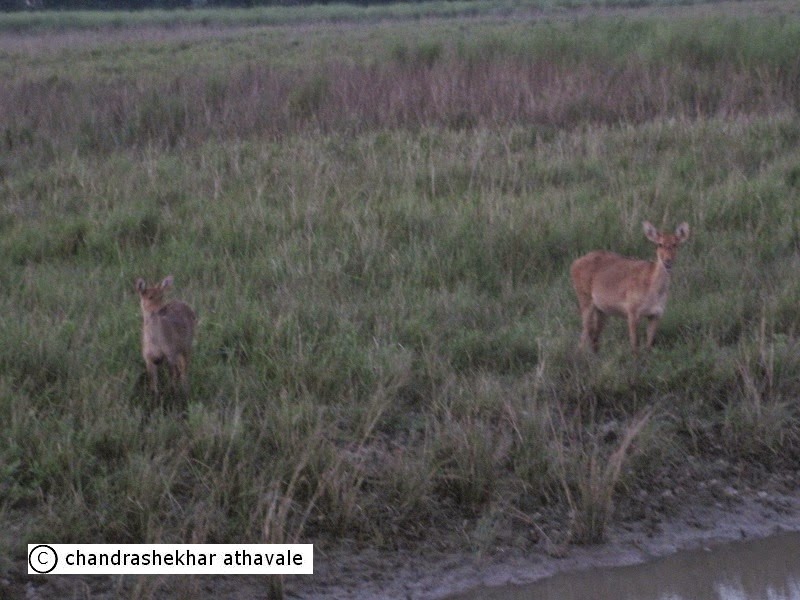 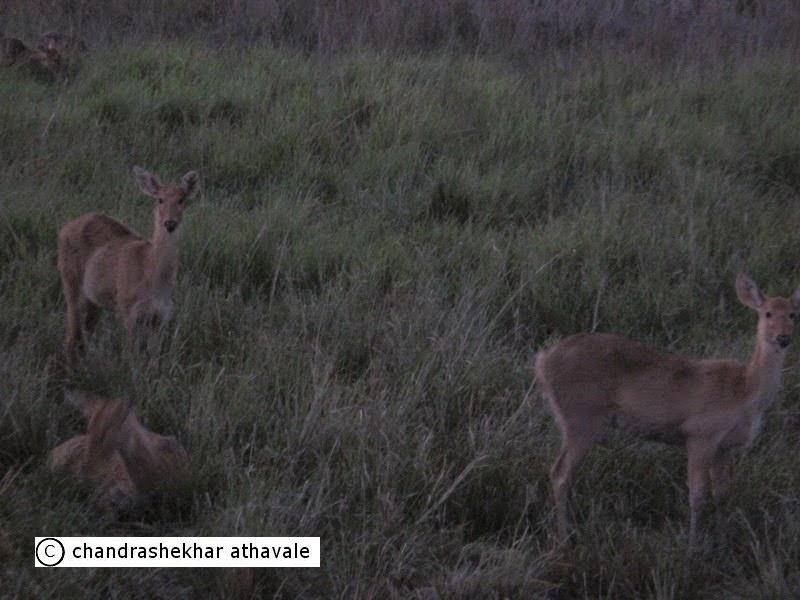 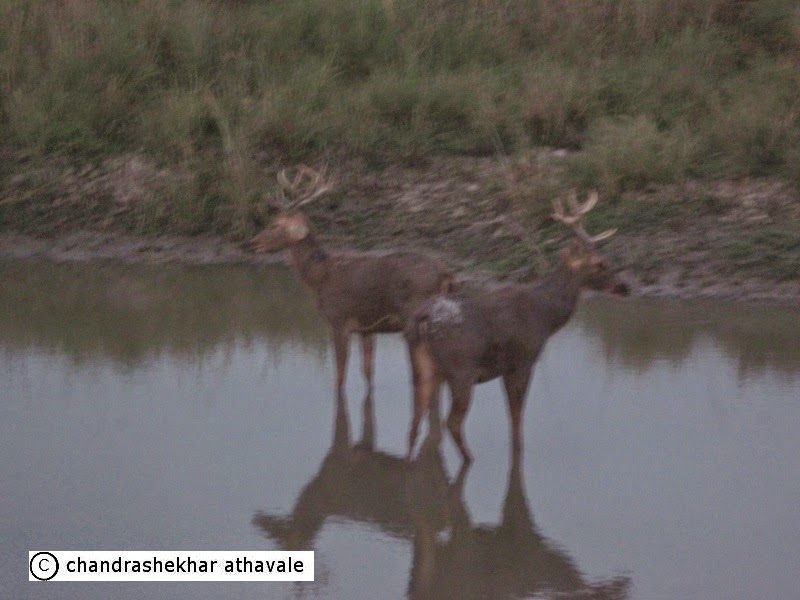 As our cow elephant starts her walk, I notice a small baby elephant moving around between her legs. The mother keeps a careful watch on the baby as we trudge on. The ride is far more comfortable than I had ever imagined, except for a rhythmical sway backwards, when a steel handlebar keeps hitting my back. But I can easily bear that out without any problem. We start moving. What we have around us, to start with, is an expanse of marshy wetlands with hundreds of muddy ponds spread around with grass patches in between them. I see a few female Barasingha or Swamp deers grazing in the low grass, suddenly becoming cautious and attentive as our elephant approaches them. Next,as we push ahead, I see two fine male Barasingha specimens, standing in the middle of a muddy pond looking in opposite directions. They are large deers with wooly hair and a mane. Barasinghas are mostly found near wetlands or swamps and graze on grasses and aquatic plants. 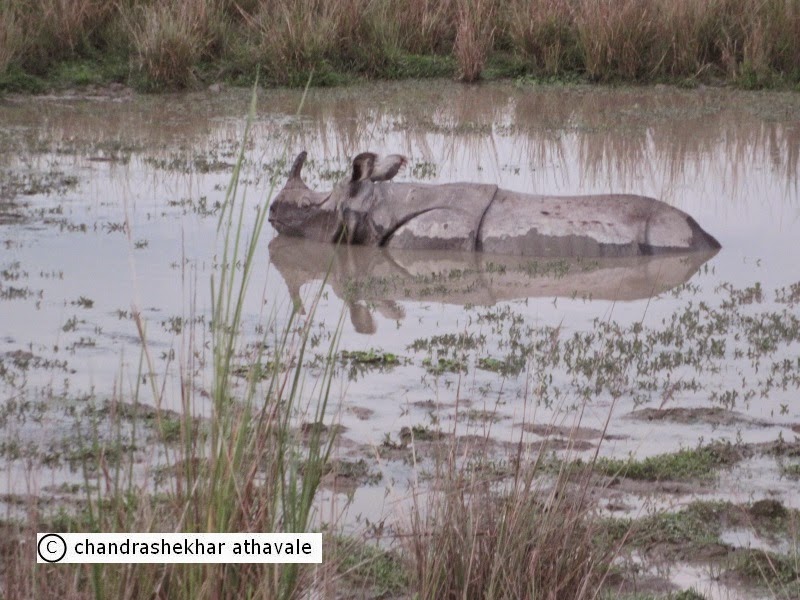 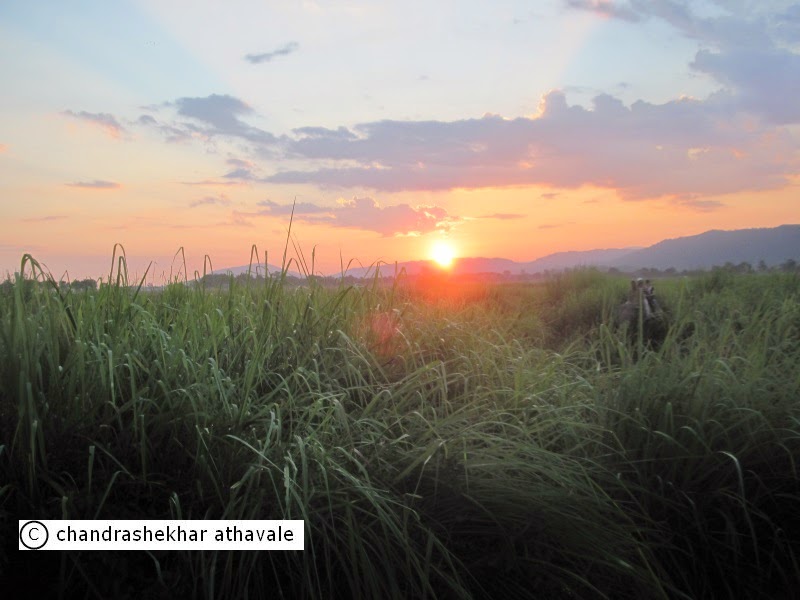 Slightly ahead is a water pond, surrounded by grasses from all sides. Right in the middle of a pond, a bull Rhino is enjoying his mud bath. The elephant stops nearby. The Rhino lifts his head and looks at us. The sun has just broken in, at the horizon and Rhino's dirty gray body shines for a moment before turning muddy gray again. Having had his look at the visitors, he again puts his head back in water, totally disinterested! We move on, the grass on both sides is now getting taller and taller. It is so tall that it is now brushing my hands and shoulders, even when I am riding a fully grown elephant. This tall grass is aptly called as Elephant grass, because other animals find going through it quite tough. 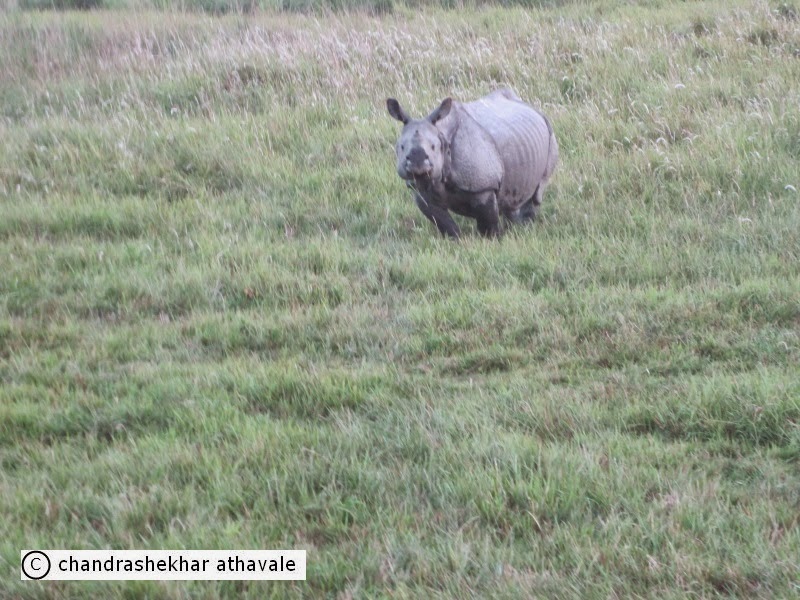 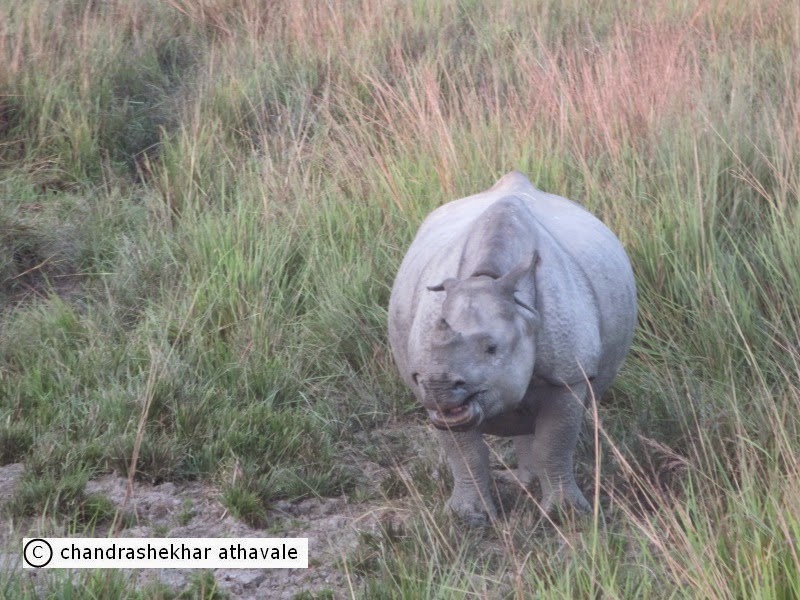 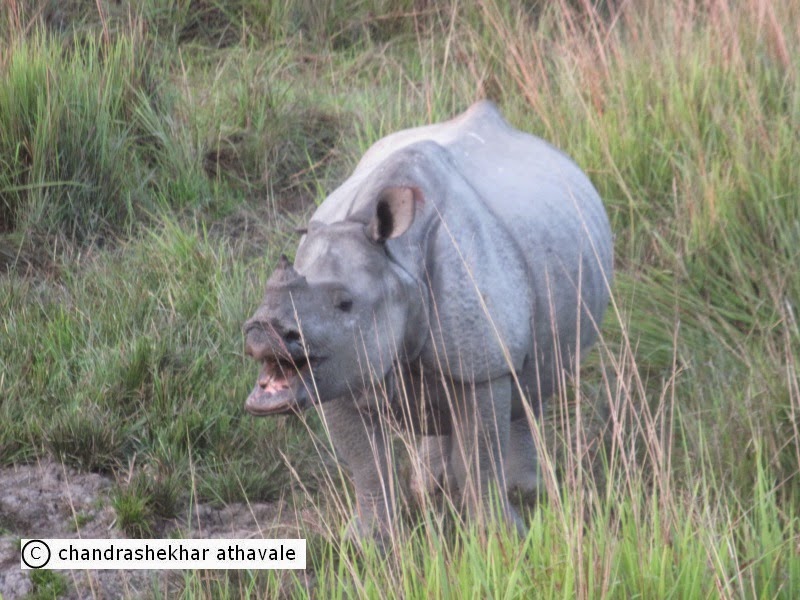 Meanwhile, the baby elephant has suddenly disappeared in the tall grasses. His watchful mother suddenly is alarmed and gives a serious sounding call to him and wants to dash towards him. This is a really scary moment for me, riding the elephant. But the mahout quietens her and the baby also walks out of grass towards her. I heave a sigh of relief. 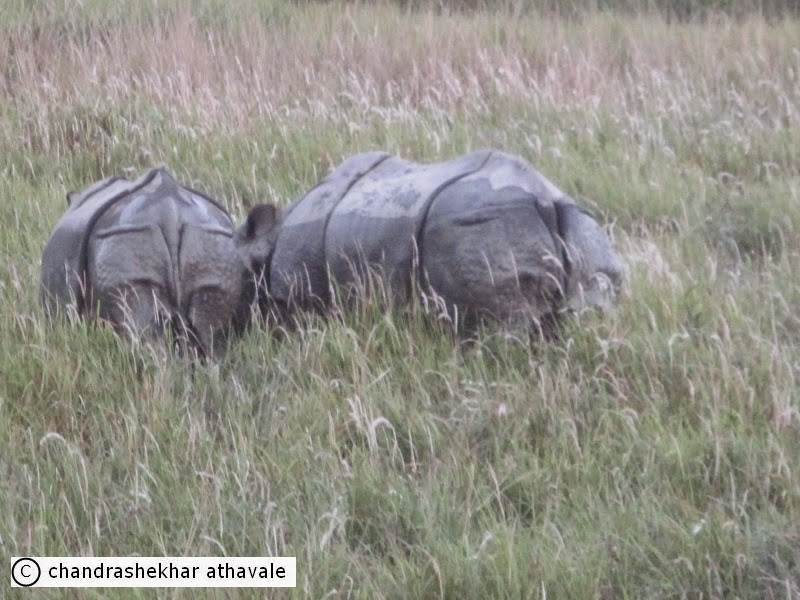 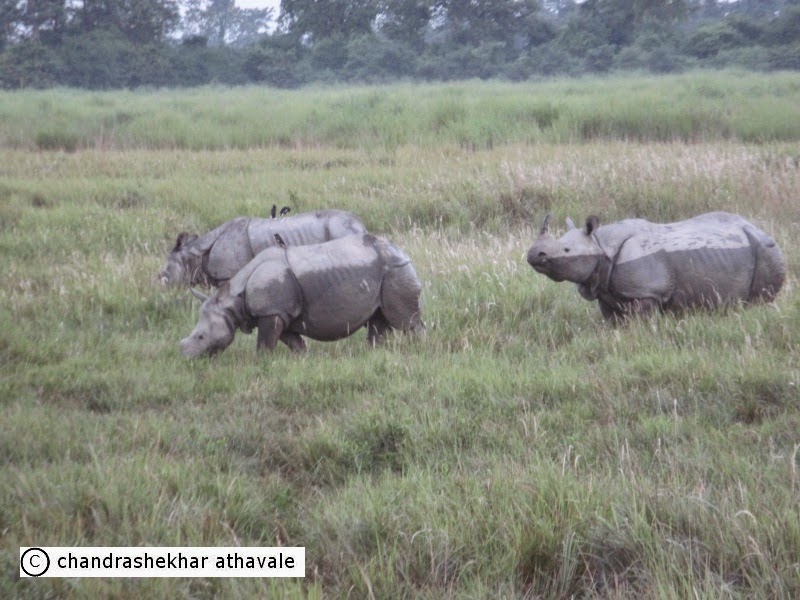 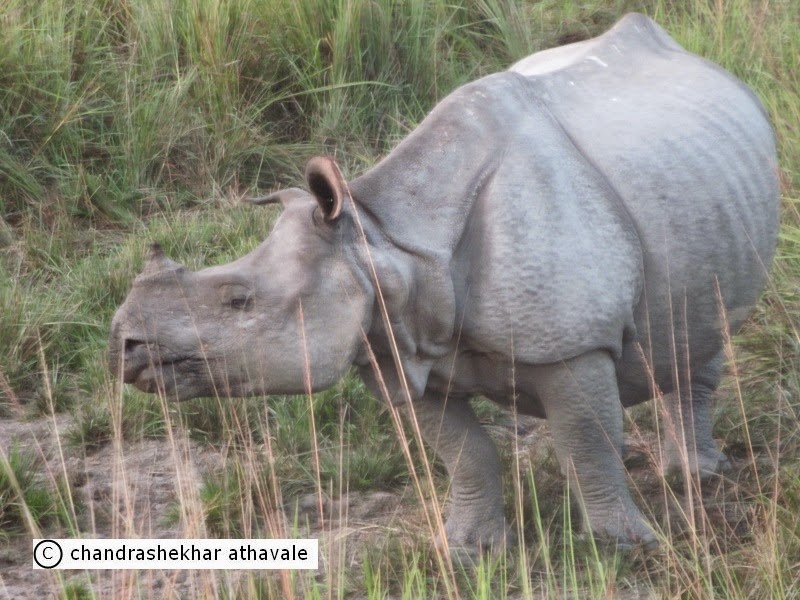 We again reach a patch where grass is not so tall. Here, there are Rhinos and Rhinos, some in groups of twos or threes and some wandering alone. In Kaziranga, there are more than 2000 Rhinos.The Indian Rhinoceros (Rhinoceros unicornis) is also called great One-horned Rhinoceros or Asian One-horned Rhinoceros belonging to the Rhinocerotidae family. They are listed as a vulnerable species. This large mammal weighs between 2260 kg and 3000 kg. It it is the fourth largest land animal and has a single horn, which measures 20 cm to 57 cm in length. The Rhinoceros can run at speeds of up to 55 km/h (34 mph) for short periods of time and is also an excellent swimmer. It has excellent senses of hearing and smell but relatively poor eyesight. If angry it can attack anything. In fact its eyes appear so small compared to body bulk that one gets a feeling that the animal is blind. Fortunately none of the gang views us suspiciously and neglect us going about their grazing routine. As they need around 50 or 60 Kg of food every day.I ask our Mahout about the poachers, who want to kill rhinos and cut of the horns, as it fetches huge price in black markets. He gives a chilling but quite satisfactory answer. He says that everyone here is very proud of our Rhinos. If we find some poachers trying to hunt them, we simply kill them. 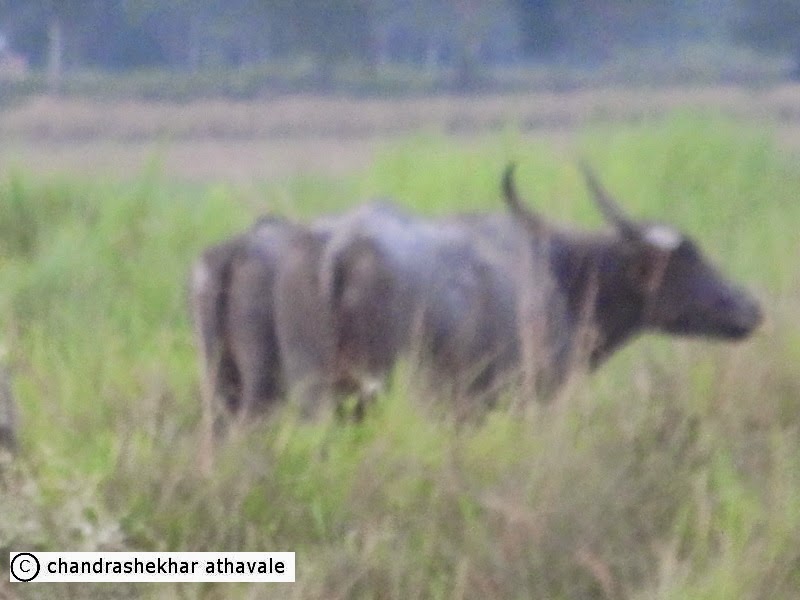 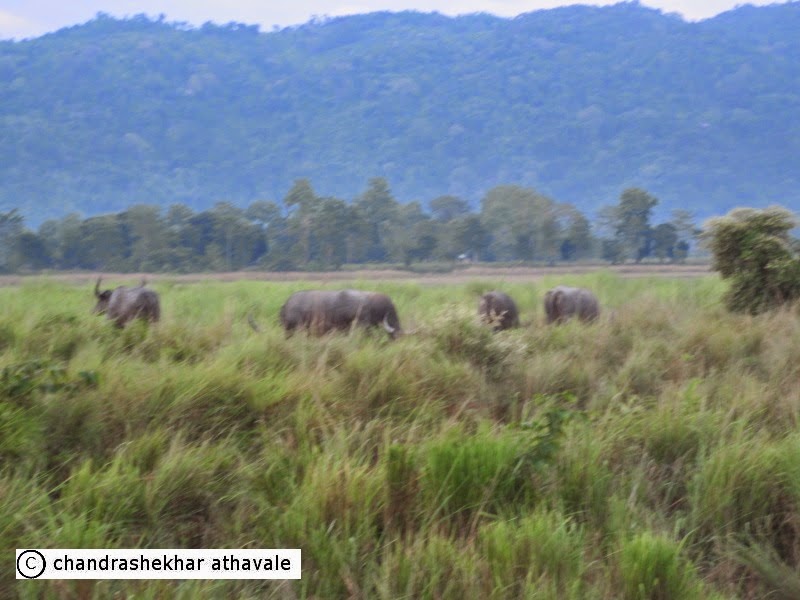 We move on. On the left there is a herd that looks familiar, but the animals are much bigger in size. They are the Wild Asian Water Buffalos (Bubalus bubalis) enjoying early morning sun. These animals are much bulkier than the domesticated water buffaloes we see around but have a narrow head, small ears and large hooves. There are more than 2000 wild buffaloes in Kaziranga though they are considered as endangered species. Wild buffaloes are also important to the grassland ecosystem as they help in plant rejuvenation.

We spend next 15 minutes searching for the animal, considered as largest one of the big five of Kaziranga; the wild elephants. It is estimated that there are more than 1500 wild animals in the park. It however appears that the elephants have decided to shun us today as not a single soul is seen anywhere to the limits of our vision. It is clear that I would have to satisfy myself with the solitary elephant that I saw yesterday, playing in the mud. 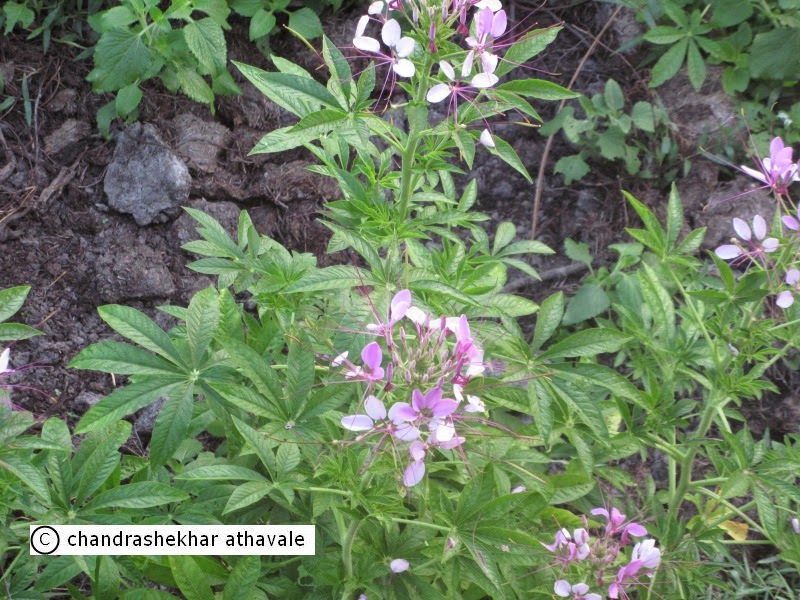 As we move on, the mahout points out to a cluster of beautiful purple-blue flowers. Rhinos have one very peculiar habit. They may wander around the ground, grazing, but would drop their faeces only at some fixed points creating huge dung piles also known as middens. The purple-pink flowering shrub, known as the spider flower ( Cleome hasslerana, Cleome specie), grows on these dung piles. The plant is native of the South American tropics and also found in Europe and North America landscapes.. It has invaded somehow in Kaziranga. One horned rhinos love to eat it and seeds are passed on through their faeces. Our mahout calls the flowers as Rhino-Potty flowers.

The elephant we are riding, crosses a small ridge. Ahead, in an cleared area, is another elephant mounting-dismounting platform. This means that our elephant ride is coming to an end. I dismount and walk away. On one of the pillars supporting this platform, there are flood markings showing up to what level, flood waters of Brahmaputra had reached on earlier years. From the markings, it is obvious that this area gets flooded almost every year.

We head back to the resort. After a quick breakfast, we shall start for Guwahati, about 228 Km away.

(To be continued in part XIII)