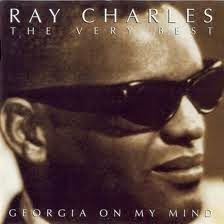 Ray Charles Robinson (commonly known as Ray Charles; 1930 – 2004) was an American singer, songwriter, musician, and composer who is sometimes referred to as "The Genius.”

Ray Charles, a native of Georgia state of USA, recorded the song"Georgia on My Mind" in 1960. The song became a major hit, reaching the number one spot for one week in November 1960 on the U.S. Billboard Hot 100. Ray Charles performed it before the Georgia General Assembly (the state legislature) on March 7, 1979, in a mutual symbol of reconciliation after conflict over civil rights issues. After this performance, the connection to the state was firmly made, and the Assembly adopted it as the state song on April 24.

If you can not see the embedded video on your android devices, here is the link. http://youtu.be/Thls_tMuFkc You can also copy and paste the link in your You Tube App. If that also does not work, search You tube, Ray Charles, Georgia on my mind