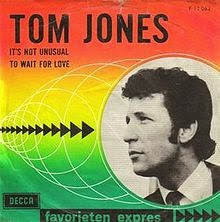 "It's Not Unusual" is a song, first recorded by a singer who was then-unknown to the music world, Tom Jones. The song reached number one in the UK Singles Chart in 1965. It was also the first hit for Jones in the US, peaking at No. 10 in May of that year.

Tom Jones Jones later used this song as the theme for his television musical variety series This Is Tom Jones. It has since become Jones' signature song.

If you can not see the embedded video on your android devices, here is the link. http://youtu.be/z6azSHCHwPc You can also copy and paste the link in your You Tube App. If that also does not work, search You tube, It's Not Unusual, Tom Jones,