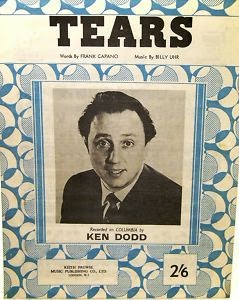 "Tears" is a 1929 vintage song that was made famous by singer Ken Dodd as a single, released in 1965. It became a No. 1 hit in the UK Singles Chart, and the biggest selling single of 1965. The song also hit number one in the Irish Singles Chart. The single spent 24 weeks in total on the chart, with five of those at number 1. It sold over a million copies in the UK, becoming the biggest-selling single of 1965, and was the third biggest-selling single of the 1960s. Kenneth Arthur or "Ken" Dodd,(born 8 November 1927) is an English comedian, singer-songwriter and actor
Enjoy

If you can not see the embedded video on your android devices, here is the link. http://youtu.be/Ys1ShRxuAnY You can also copy and paste the link in your You Tube App. If that also does not work, search You tube, Tears, Ken Dodd,