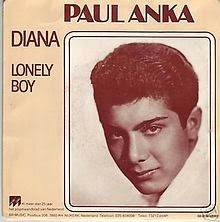 This week we have a hit from Paul Albert Anka. He is a Canadian singer, songwriter, and actor amd became famous in the late 1950s and 1960s. He recorded "Diana" in 1957 inspired by a high school friend of his named Diana Ayoub. It reached number one on the Billboard "Best Sellers In Stores" chart and sold over nine million copies. It hit number one on the R&B Best Sellers list chart and also reached number 1 in the UK Singles Chart and sold 1.25 million copies in the UK.
Enjoy

If you can not see the embedded video on your android devices, here is the link. http://youtu.be/wPw5WiABUOA You can also copy and paste the link in your You Tube App. If that also does not work, search You tube, Diana, Paul Anka.