Killing two birds with one stone 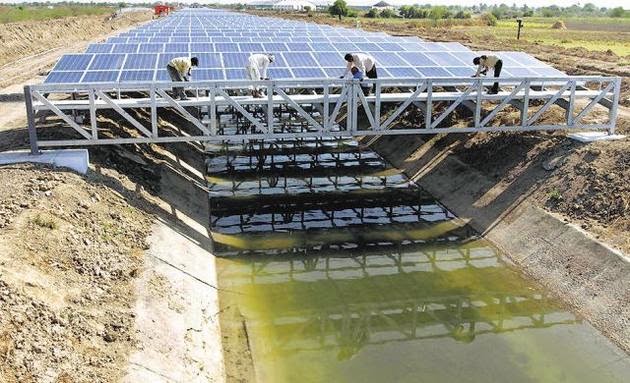 India is a semi tropical country that gets plenty of sunlight. India's landmass gets about 300 clear, sunny days every year. According to an estimate, India's theoretical solar power reception, on only its land area, is about 5000 Petawatt-hours ( 10^15 watts x hours) per year. The daily average solar energy incident over India varies from 4 to 7 Kilo watt hours for every square meter of land with about 1500–2000 sunshine hours per year. This is the main reason why India is considered as an ideal place for establishing Solar Photovoltaic arrays for electricity generation.

This huge solar radiation falling on India's landmass has a negative side too. The heat created by this intense solar radiation creates massive water evaporation from surface water sources such as lakes, rivers and reservoirs. According to a report published by Government of India, the total water loss in India due to evaporation caused by solar radiation is a staggering figure. This report says that the total utilizable surface water in India is about 690 Billion Cubic Meters. Out of this quantity, India looses about 56000 Million Cubic Meters of water because of evaporation losses.

Indian landmass being so wide and huge, there is a wide variation in weather patterns and associated landscapes. The weather varies from alpine Himalayan weather to tropical Kerala. Two western states of India; namely Gujarat and Rajasthan, have arid or semi arid landscapes because of scanty rainfall. It so happens that because of these conditions, both these states are ideal for establishment of solar farms or solar power stations. India has unveiled a US$19 billion plan to produce 20 Giigawatts of solar power by 2020 in July 2009. At present, more than thirty, solar photovoltaic generators generating about 400 MW have been commissioned around the country with states of Gujarat and Rajasthan claiming lion's share in the installed capacity.

So, how does a solar form look like. The individual photovoltaic cells need to be connected together in a solar farm to get a reasonable output power. This is done by mounting them inside a metal box with a glass front. Such boxes are usually mounted on steel frames, which are designed in such a way that the solar modules are at a fixed inclination calculated to provide the optimum annual power output profile. The modules are normally oriented towards the Equator, at a tilt angle slightly less than the latitude of the site. In some cases, depending on local climatic, topographical or electricity pricing regimes, different tilt angles can be used. Photovoltaic modules are then electrically connected to each other. On a major solar farm power generator, we can see hectors and hectors of land with photocell modules mounted on metal stands, all oriented towards the equator. This also means that one of the main requirements for a solar farm is the availability of vast stretches of land, where sun light is available.

In the state of Gujarat, two river systems that can be considered as major water sources are located to southeast of the state. Out of these two, the Narmada river, has been dammed near Navagam to create a water reservoir with an active capacity of 9500 Million Cubic meters. The water from the dam is distributed by an elaborate canal system northwards. The Narmada Main Canal is 458 km Long and passes through 9 districts before reaching Rajasthan state. The main canal can be divided in three sections; first 144 Km section; second section up to 263 Km, where Sourashtra branch canal takes off and third section from 263 to 458 Km. 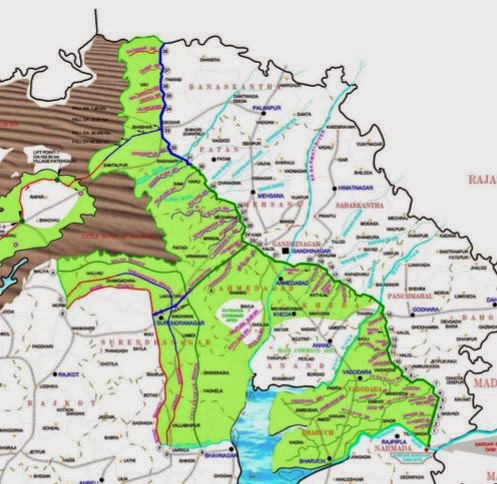 The first section up to 144 Km has 15 branch canals having total length of 657 Km. The Saurashtra Branch Canal, 104 km. Long has 7 sub-branches off taking with a total length of 865 km. The third section (263-458 Km) also has 15 branch canals under construction. I have purposely given these details to make readers aware the complexity and coverage of this vast canal network that covers 19000 Km. length. Major portions of this vast canal network, irrigate areas that have scanty rainfall and therefore are arid or semi-arid. One of the major problems faced by this vast canal system feeding arid areas are the evaporation losses.

Gujarat Government came up with a new out of the box idea of installing solar panels on top of the canal segments. This would have had twin benefits; firstly no land is required for the project, reducing its capital investments and eventual cost of electric power generated and secondly because the panels cover the canal water from sun's heat, the evaporation losses can be minimised. 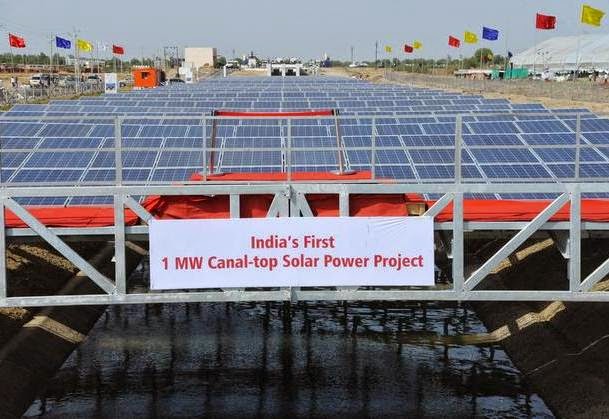 A pilot project to generate a 1 Megawatt (MW) of electrical power was taken up in 2010 on the Narmada branch canal near Chandrasan village of Kadi taluka in Mehsana district covering over a 750 meter stretch. The engineering, procurement and construction contract for the project was awarded to Sun Edison at a cost of Rs 177.1 million. It was inaugurated on 24 April 2012. A second 10-MW megawatt capavity project was taken on a 3.6 km stretch of the Vadodara branch canal of passing through Vadodara city. There are nearly 35,000 solar panels and the power generated is fed into the State grid and also to operate pumping stations on the canal. The total cost of this project, commissioned in November 2014 has worked out to be $18.3 million and was financed by the State government.

By now, readers must have realised the vast potential of this brilliant initiative of the Gujarat Government. To quote some figures, even if we assume that only 10% of the canal network length of 19000 Km is covered with solar panels, 2,200 MW of solar power can be generated. This means that about 11,000 acres of land can be potentially conserved along with about 20 billion litres of water saved per year, which would have evaporated.

Killing two birds with a stone was never easy. Gujarat Government seems to have achieved the feat.