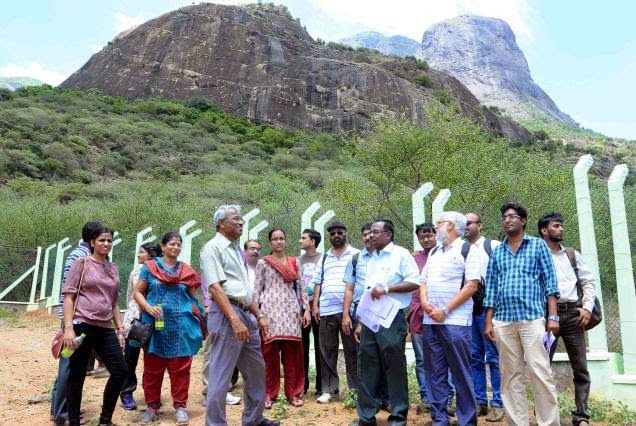 We all know that all matter consists of atoms, which have a central nucleus and number of electrons. The nucleus is a cluster of two types of particles. A proton with a positive charge and a neutron, which is electrically neutral. Atoms of various elements differ from each other because they have different numbers of protons, neutrons and electrons. Each atom has a “Mass Number,” which indicates the total number of protons and neutrons in the atomic nucleus. Each and every atom also has an atomic number, which is the number of protons found in the nucleus of that atom.

In the year In 1898, french scientist couple,Marie and Pierre Curie found a strange phenomenon that atoms of some chemical elements change. They named this phenomenon as radioactive decay. This is a process by which, a nucleus of an unstable atom changes into an atom of another element simultaneously loosing energy by emitting ionizing radiation. This radiation can be one of the following three types; alpha particles (nuclei emission) , beta particles (electron emission), and gamma rays (high energy photon radiation).

In 1930's, the scientists studying the process of Beta decay, were puzzled by a particular anomaly observed in the reactions, where a nucleus of atomic number Z transforms to one of atomic number Z+1 and an electron is emitted. An example of such beta decay is the decay of carbon-14 to nitrogen-14 used in archaeological dating: 6C^14 → 7N^14 + e–. It was also observed that the transformed nucleus always had less mass than the parent nucleus. It was therefore logical to think that the difference between masses of parent and transformed masses must have got converted into the kinetic energy imparted to electron that was given up, according to the Einstein's famous mass-energy conversion equation E = mc2. Surprisingly, it was observed that the electron always carried off less energy than expected, and instead of all electrons having the same energy, there was a continuous distribution.

In December 1930, Wolfgang Pauli proposed that in Beta decay processes another light neutral particle is also emitted alongside the electron. This would explain the anomaly because the available energy is split between the electron and the undetected neutral particle. Fermi incorporated the new particle into his ground-breaking theory of beta decay, published in 1934 and named it as Neutrino. Soon it was realised that Neutrinos are created in nuclear reactions such as those that take place in the Sun, in nuclear reactors, or when cosmic rays hit atoms. Neutrinos do not carry electric charge, which means that they are not affected by the electromagnetic forces that act on charged particles such as electrons and protons. Neutrinos are affected only by the weak sub-atomic force, of much shorter range than electromagnetism, and gravity, which is relatively weak on the subatomic scale. Therefore a neutrino typically passes through normal matter unimpeded. It is estimated that about 65 billion (6.5×10^10) solar neutrinos per second, generated by solar nuclear reactions, pass through every square centimeter perpendicular to the direction of the Sun in the region of the Earth.

It was thought first that since Neutrinos pass through any matter, it would be impossible to detect them. However in the 20 July 1956 issue of Science, Clyde Cowan, Frederick Reines, F. B. Harrison, H. W. Kruse, and A. D. McGuire published confirmation that they had detected the neutrino,a result that was rewarded almost forty years later with the 1995 Nobel Prize. Neutrinos are available in abundance in the universe. The human body also emits neutrinos. Neutrinos were created in large numbers during the Big Bang that led to the creation of the universe. They also continue to get created when the cosmic rays interact with the atmosphere. Scores of neutrinos pass through the human body without causing any harm because they hardly interact with matter. Because of their non-interacting nature, it is almost impossible to detect them on the earth’s surface, which is overwhelmed with cosmic ray interactions. Therefore, any study on Neutrinos can be carried out only in a laboratory created in deep underground. 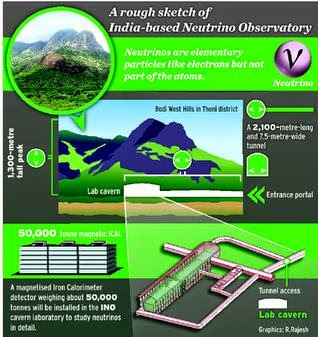 
In India, the Kolar Gold Fields (KGF), located in the Kolar district of the state of Karnataka, was found to be an ideal underground site for the neutrino particle experiments and observations as the mines had become defunct. Neutrino-related experiments were started in KGF in 1964. The main goal was the detection of atmospheric neutrinos, produced by cosmic rays decaying in the Earth's atmosphere to produce billions of neutrinos. The experiment discovered the first atmospheric neutrinos in an iron calorimeter (A calorimeter is an instrument for measuring the heat of chemical reactions or physical changes as well as heat capacity.) here, about the same time as a similar discovery in a mine in South Africa. The experiments ended with the closure of Kolar mines in 1992. 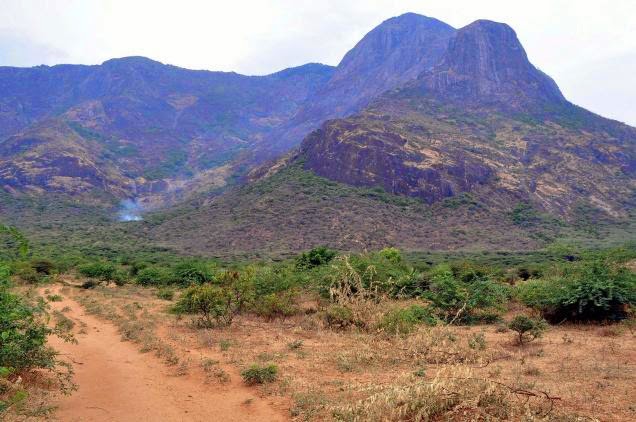 This week, Indian Government decided to give a go ahead to a deep underground laboratory at the cost of 15 Billion Rupees. The laboratory, to be called as India-based Neutrino Observatory (INO), would be set up in Bodi West Hills, Tamil Nadu sate of India. It will be located in a cavern at the bottom of a granite peak. The cavern can be accessed through a 2 Km long and 7.5 meter wide tunnel to be dug at the bottom of the peak. For the purpose of establishing surface facilities required for operating the observatory about 26 hectares of revenue land have been acquired near the entrance to the proposed tunnel. The hills at this site rise very steeply, that is why it would suffice to tunnel only about 2 kilometres horizontally to provide the laboratory with about 1300 metres of high-quality granite cover above. 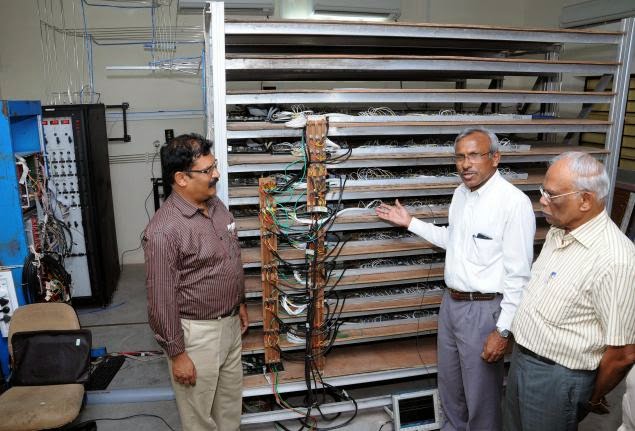 Main Neutrino detector to be built in the underground laboratory is a magnetised Iron Calorimeter (ICAL) detector, weighing about 50,000 tonnes. ( Compact Muon Solenoid detector at CERN in Geneva, Switzerland has only 12500 tonne magnet). Neutrinos will interact with the iron, layered in sheets, and spew out charged particles, whose paths will be bent by the iron's magnetic field. About 30,000 detectors sandwiched between the sheets of iron will track these charged particles, providing information about the incident neutrinos. The laboratory would also have in house all associated instrumentation required. 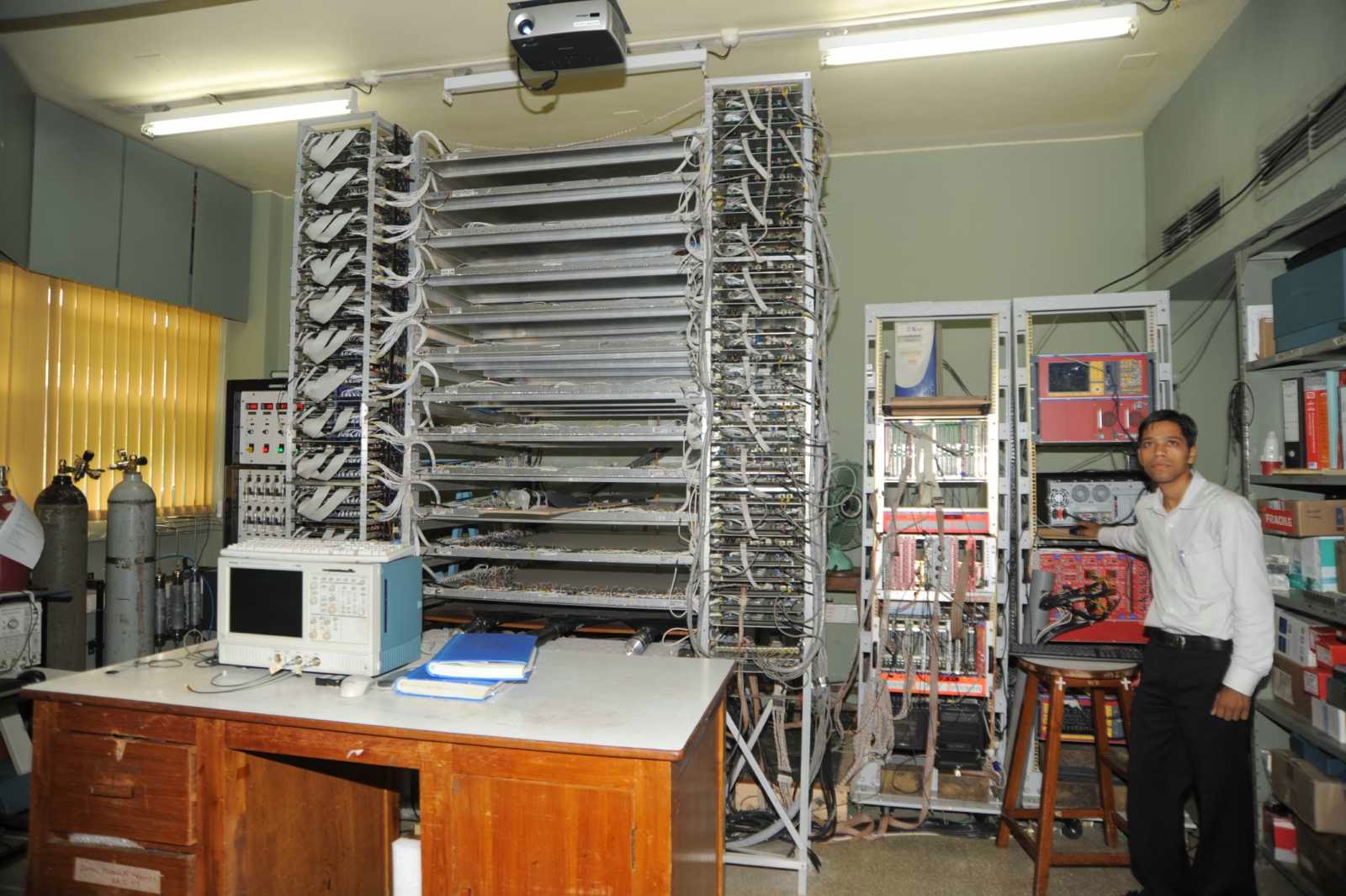 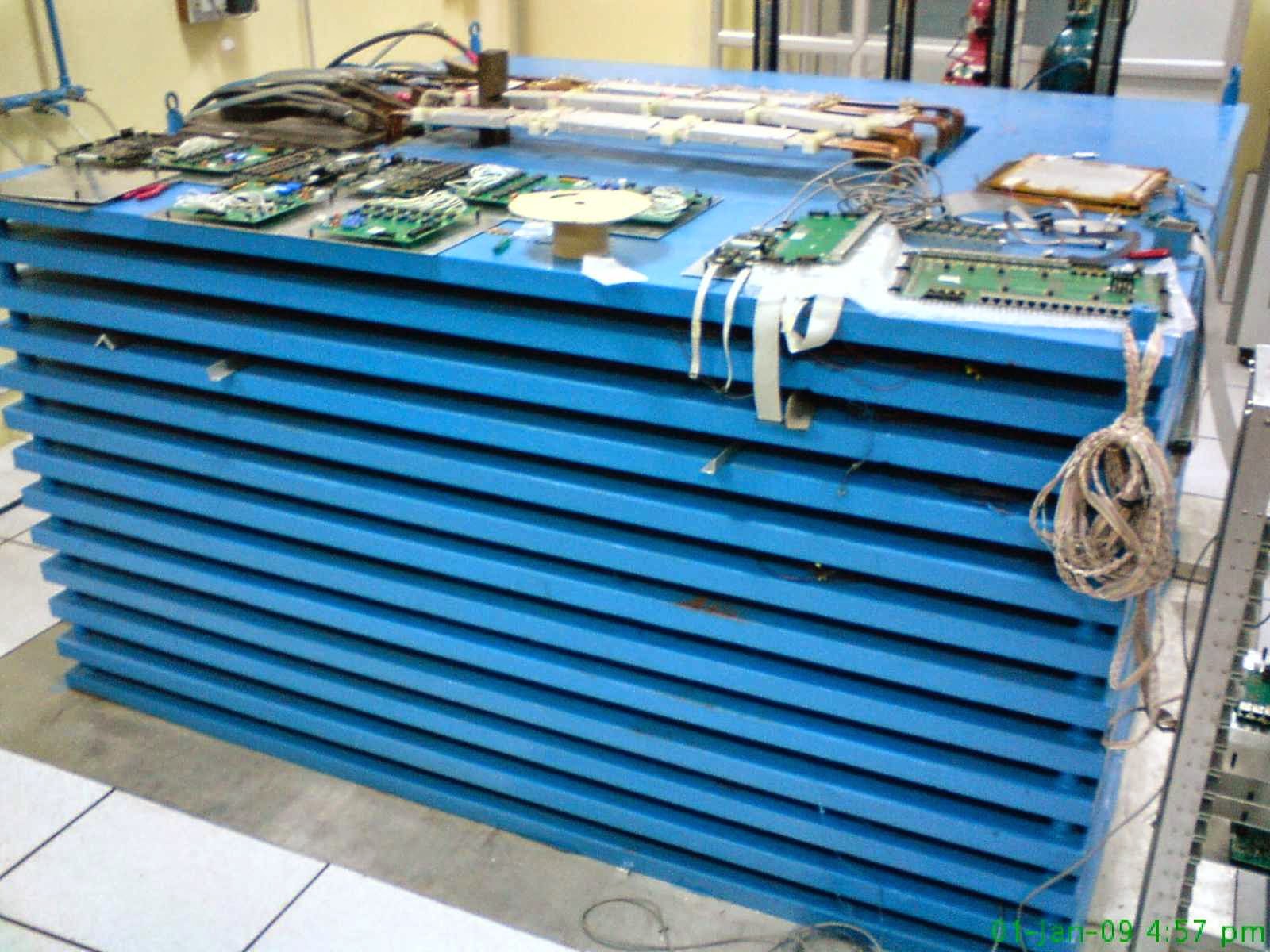 The INO Project is led by Prof. Naba Mandal, who is a Senior Professor at Tata Institute of Fundamental Research, Mumbai. He says that the project would put India back on the world map of underground science, a position that was held during second half of the 20th century when Indian scientists had the privilege of working at the world’s deepest underground lab at Kolar Gold Mines. 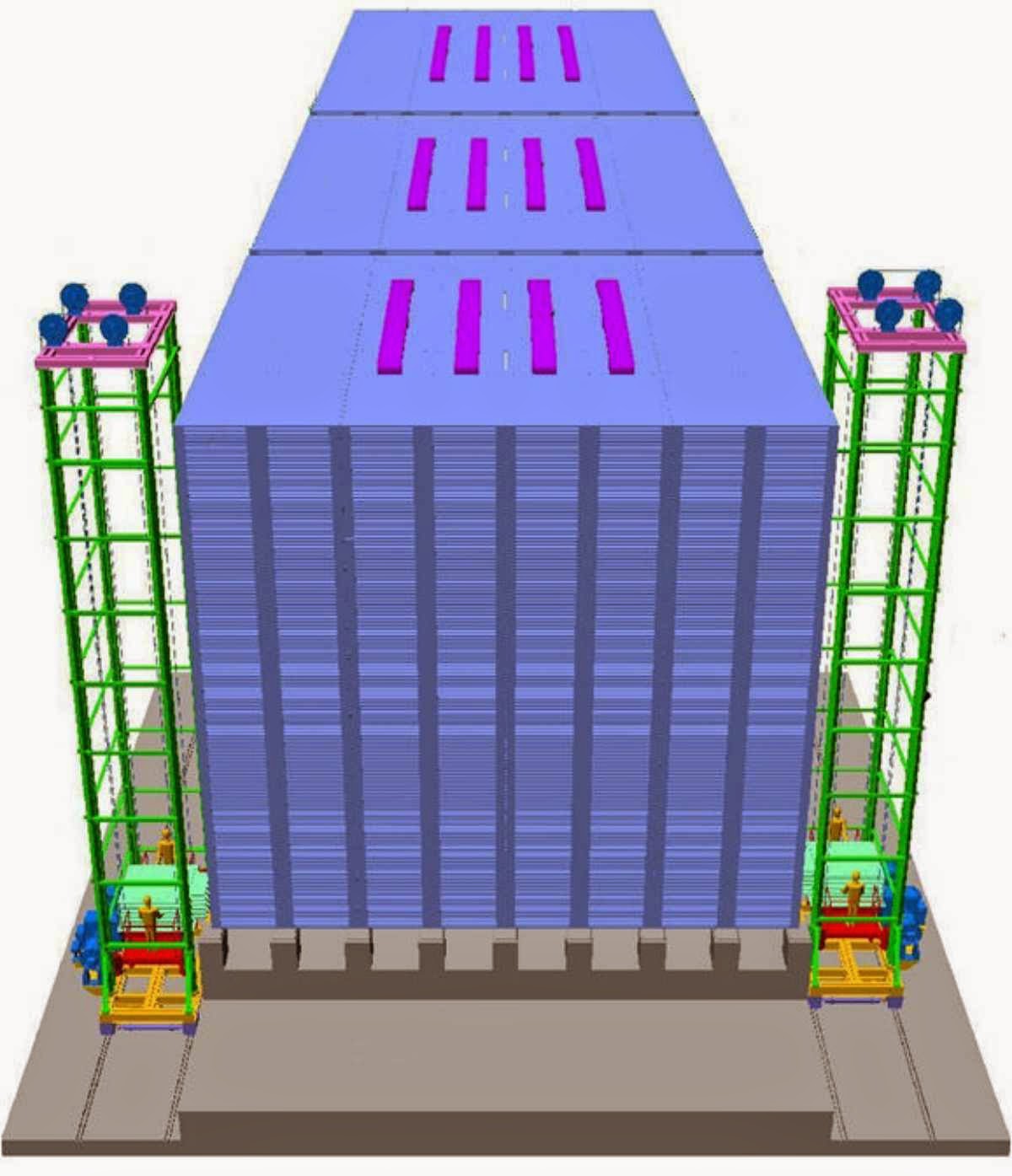 This is the second massive pure science project cleared by India's new Government after the 30 meter giant telescope to be set up in Hawaii. The federal Ministry of Environment and Forests had accorded clearance to the site in October 2010 itself. It is hoped that INO will be the agent of transforming physics of this kind in India and will make a global impact. The outcome of this investment will be extraordinary and long term.